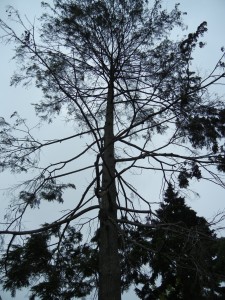 Tsuga heterophylla, commonly known as Western hemlock, belongs to the family of Pinaceae. They are gymnosperms. It is an important component of the vegetation of Pacific Northwest Forests. It is native to the west coast of North America, with the northern limit in Alaska and southern limit in California. Tsuga heterophylla is evergreen coniferous tree, with pines as its main characteristic. It can grow to exceptionally tall height of 30-50 meters at least. The crown at the top of the tree is relatively narrow and droops at the top of the tree. The bark is brown and furrowed but it is thin compared to other trees. The leaves are needle-like, flat and glossy. Their color mainly ranges from yellow to dark green on the upper surface and whitish underneath. The needles have feathery, flat sprays and they are of different lengths. Tsuga heterophylla has numerous numbers of small cones. These cones are reddish-brown in color when mature. They are woody and can resist damage during harsh environmental conditions. An interesting fact about this tree is that Western hemlock is named after a weed found in Europe which has a similar smell as the tree. It is not related to poison-hemlock, the weed which actually killed Socrates. Western hemlock has a high tolerance of shade when they are young. As they grow up, they are able to compete very well in their habitat and can dominate over other species.

Tsuga heterophylla has a lot of uses, especially for people dwelling on the coasts. They carve it out to be used for various implements like spoons, combs, dishes, etc. The bark of the tree is rich in a substance that is useful for tanning hides. The wood has an even grain and resists scraping, which makes it easy to machine. It is widely used for doors, windows, parts of staircases, ladders and other architectural millwork items. Interestingly, Tsuga heterophylla is the state tree of Washington. The edible cambium can be collected by scraping slabs of removed bark. The resulting shavings can be eaten immediately, or can be dried and pressed into cakes for preservation. The needles can be eaten directly or made into tea which is rich in Vitamin C. The bark also has some medicinal uses, especially related to herbalism. A decoction of the grounded bark is used in the treatment of hemorrhages and tuberculosis. An infusion of the twigs is very effective in treating kidney or bladder related problems. One external use is to wash ulcers and sores. One major advantage of these plants over other plants is that they are shade tolerant when they are young and as they mature, they cast shade over other species around them. This is a means by which they can regenerate themselves without letting other shade-intolerant species to grow. They also produce a large number of seeds.