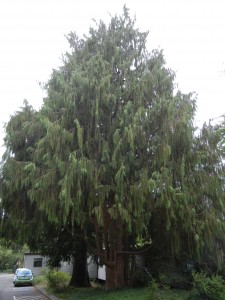 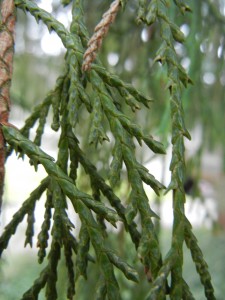 C. nootkatensis is found in the Pacific Northwest, along the West Coast from Northern California to Alaska and on Vancouver Island the Queen Charlotte Islands. Its coastal distribution means the Yellow cedar is not found in the interior of British Columbia. C. nootkatensisis is very tolerant of poor soil conditions and can even tolerate slightly acidic soil. It thrives in moist soil and is even sometimes found in waterlogged areas. It has shallow roots that are mychorizial with fungal symbiosis.

The Yellow cedar can grow to a maximum of 40 meters tall and has a greyish-brown bark. Its leaves hang vertically and have a scale-like appearance which flattens out on the edges. The plant is monoecious meaning male and female reproductive structures can be found on the same tree and often on the same branch. 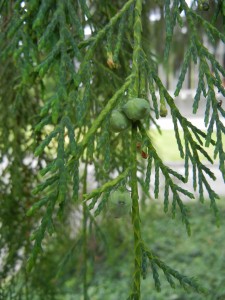 Pollen cones are small, about 2-3mm in length and are greenish yellow. Seed cones initially resemble small berries but when mature are globular and hard. The seed cones have unique triangular projections which look like small prickles. Relatively speaking, the Yellow cedar is slow growing although it can reach 1000 years old. If found at higher elevations C. nootkatensis is small and shrub like. 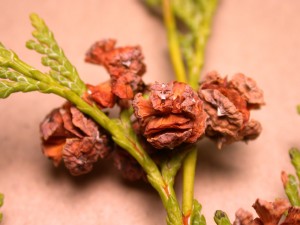 Yellow cedar wood is exceptionally durable and sturdy and it is for this reason it is often used in building structures such as shingles, posts, exterior doors, decking, stairs and landscaping. The wood also has uniform density which makes it a popular choice along with the fact that Yellow cedar wood lacks visual grains. Aboriginal peoples had many uses for the wood, making objects such as blankets, bows, bowls, and boat building. 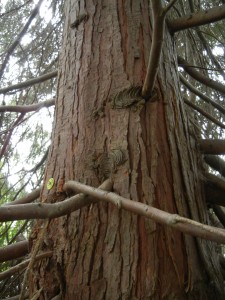 There has been a mass number of C. nootkatensis dying in Northern B.C. and Alaska (over an area of 500,000 acres over the past 100 years). At first no one could understand why this was happening and it wasn’t until recently that scientists figured out why Yellow cedar trees were dying on such a large scale. The roots of the Yellow Cedar are relatively shallow and near the surface and are susceptible to root freezing, which eventually leads to the death of the entire tree. Root freezing occurs during late winter and early spring, when snow is not present on the ground. Usually, the snow acts as a barrier that protects and insulates the shallow roots from the cold. However, when the snow melts, the roots are prone to freezing. This is especially important with climate change and rising temperatures which would lead to snow melting earlier, and ultimately more Yellow Cedar deaths. This is even more concerning considering Yellow Cedar trees are slow growers. Therefore, we must be pay special attention to climate change if we are to stop Yellow Cedar from being wiped out.