Calocedrus decurrens, also known as the incense cedar, is a species of conifer belonging to the Cupressaceae family. It is native to North America, specifically in the United States (Oregon and Nevada), and Mexico (Baja California). It is a moderately sized tree reaching up to 40-60 m in height and 3 m in diameter. 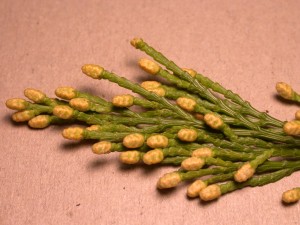 Leaves are scale-like and yellow-green in colour.  The bark is purplish-red when immature and reddish brown, flaky and furrowed at maturity. The furrows and thickness of the bark is an important feature that protects the tree from moderate fires. The trunk is larger at the base, and does not develop branches until half way up its height.

C. decurrens is monoecious with both seed and pollen cones occurring on the same plant.  Seed cones are 20-35mm long, and can range from pale green to golden yellow in colour. 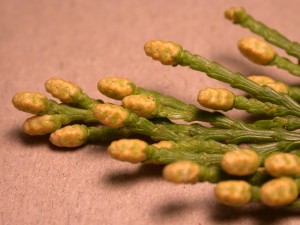 Additionally, seed cones are long and egg-shaped when closed but the innermost scales often bend or fold back when opened. Seeds have 2 wings which help the seeds disperse longer distances in the wind. Pollen cones are much smaller, ranging from 6-8mm long, and are terminal on twigs. These trees grow quite slowly, but can persist for over 500 years in the wild.

Calocedrus decurrens has many small scale commercial uses. Wood can be used to make pencils, due to its soft texture. The wood of C. decurrens can also be used in construction for building fences and shingles. Twigs and boughs can be used to manufacture brooms. However, since Calocedrus decurrens is host to the wood wasp and a parasitic plant called the Incense-cedar mistletoe, wood cannot be used on a large scale. Due to its drought tolerance, the incense cedar is commonly used as an ornamental tree.