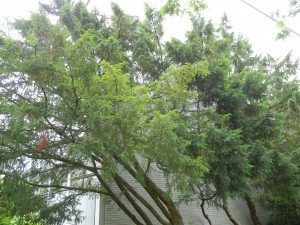 The Yew genus is capable of living in diverse climates, depending on species.  There are officially seven species that inhabit temperate regions of North America, Europe and Asia.  However, since there is evidence of interbreeding, the species distinction is controversial.  In the Pacific Northwest, the common yew tree is the Pacific Yew, Taxus brevifolia.  The Pacific Yew prefers low to middle elevations in moist soil, and is typically found along streams and damp slopes.  The distribution in North America is subalpine boreal, cool temperate, and cool mesothermal.  Interestingly, yew is the most shade tolerant gymnosperm. 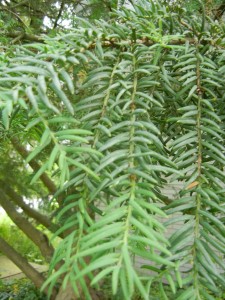 The yew is a small shrub-like tree that is found in the understory of old growth forests, thriving in the shade of Douglas Fir and Western Hemlock.  The trees grow sporadically in fresh, nutrient-rich soil, and often grow in isolated clumps of one or several individuals. They have a deep and wide spreading root system that is associated with vesicular-arbuscular mycorrhizae fungi. The trunk is fluted and grows upwards, twisting and leaning, and the reddish bark has a papery or scaly texture.  In contrast, the flattened needles are green with pointed tips. 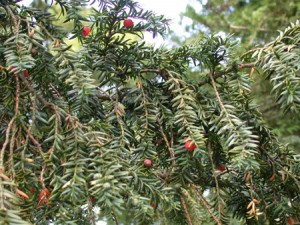 Yew trees are considered dioecious conifers, however they do not produce a typical seed cone.  Instead, the round pinkish-red fruit-like cones called arils consist of a single bony seed surrounded by a fleshy cup.  These “berries” ripen in September and are found on the underside of the branches of female trees, whereas tiny yellow cones are found on male trees and the pollen is released in the spring.  The trees are heterosporous and complete their reproductive cycle in a year.  The trees rely on animals to help with seed dispersal, most notably by birds, squirrels and rodents.

Yew trees have been used by humans for centuries in North America, Europe, and Asia.  In North America, the Pacific Yew species has been utilized extensively by the First Nations communities for making a variety of implements, and occasionally for food and medicine.  The Haida noted that if women ate too many seed “berries”, they would become sterile.  Similarly, making a smoking blend with the needles was not practiced extensively and has been known to cause dizziness.  That being said, a striking quality of the Pacific Yew bark is its anti-cancer compound, pacitaxol.  The trees came close to being endangered due to over-harvesting, however, development of the synthetic compound Taxol has enabled forests to thrive again and for humans to benefit. 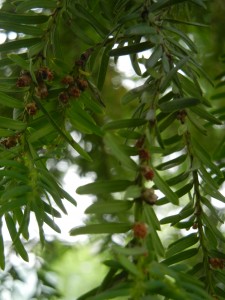 The wood has proven to be ideal for making bows due to the flexibility of the fibres.  In Europe, the yew tree has been favoured for long bows due to the lack of knots. In BC, the yew is known colloquially as the ‘bow plant” or the “wedge plant” due to its primary uses. Other uses include clubs, paddles, harpoon shafts, sewing needles, boxes, dishes, knives, drum frames, snowshoe frames, and combs.