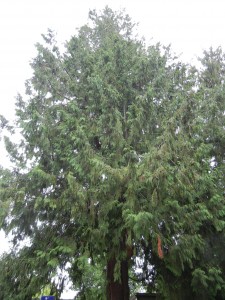 Western Red Cedars grow in low to mid elevations with cool, moist climates. They require wet soils rich in nutrients, thus typically grow in fluvial or morainal deposits, such as floodplains and river terraces. They are native to and are common along the coast of British Columbia, Washington, Oregon and California but are also found in Alberta, Alaska, 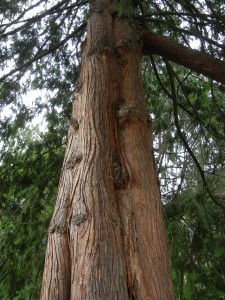 Idaho and Montana. Cedars are considered climax species and are abundant in old growth forests. However, a few individuals may be seen in recently disturbed areas.

Description
Western Red Cedars are evergreen coniferous trees. Mature trees can be 60 metres tall and 2 metres in diameter at the base. Trees grow straight up and are conical in shape with a buttressed base. Branches droop downward slightly and then turn up at the end, giving them an arching appearance. 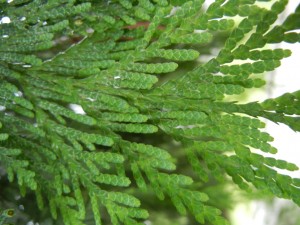 Branchlets are horizontally flat and spread out like a fan. Leaves are green, overlapping and scale-like with opposite phylotaxy. Seed cones are approximately 1 centimetre long, brown and egg shaped. Pollen cones are red and typically 1-3 millimetres long. Cedars are often identifiable by their bark, which grows in greyish brown vertical strips that are
long and stringy. 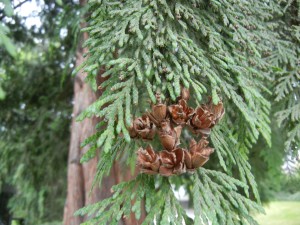 Thuja plicata undergoes sexual reproduction, making both seed cones and pollen cones to cross-fertilize with other T. plicata individuals. Both pollen and seed cones are initiated from vegetative apices. Pollen cones(simple) being to develop in early June, while seed cones (compound) develop in early July. Pollination occurs in March of the next year, with megasporogensis on the ovuliferous scale occurring a week later. During pollination, the scaly bracts of the seed cones open to expose the ovules. Pollination drops are 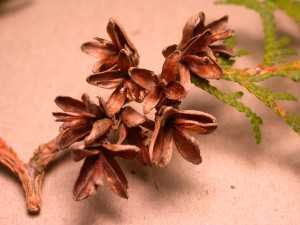 then secreted to trap wind-dispersed pollen and funnel it into the ovule. Fertilization occurs in late May after male gamete formation and female gametophyte maturation. Finally, the seeds are shed in September. Timing of the different stages in reproduction can differ depending on the temperatures of the surrounding environment.

Uses by people
The Western Red Cedars are aptly named the “trees of life” by the Northwest Coast Peoples, as the trees play a very important role in their culture. Both the bark and wood were important materials for constructing shelter, clothing, tools and transportation. The bark is durable and pliable, making it ideal to weave into skirts, hats and baskets. The wood of the tree is used for dug-out canoes, totem poles, long houses, tools, bentwood boxes and smoking fish. Various parts of the tree were also used for medicinal purposes, such as tuberculosis remedy and heart medicine. In addition to material use, cedar is prominent in spiritual culture and is often figured in mythology. Unlike modern forestry practices, Indigenous Peoples did not fell entire trees to harvest material. Instead they often used falled wood and peeled bark off in long vertical strips. The latter process has left many culturally modified trees, which remain as a part of the culture of the Northwest Coast Peoples.

Current industry also uses Western Red Cedar for many purposes. Due to its durability, lightness and resistance to decay, cedar is primarily used in home construction (roofing shingles, exterior finishings, decking and fencing). In addition, derivatives of cedar have also been found in cooking (to give flavour to smoked meats), insecticides, shoe polishes and medicine.
Reflecting the Western Red Cedar’s importance in the economy, heritage and culture of people living in British Columbia, it was named the provincial tree of BC.