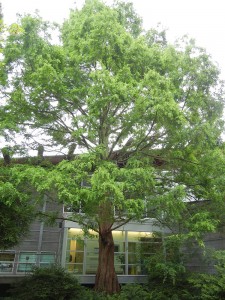 Metasequoia glyptostroboides, commonly known as the dawn redwood, is a member of the Cupressaceae family, along with juniper and red cedar. This large conifer is an interesting example of a living fossil, having first been described from fossils found throughout North America, Europe, and Asia. The earliest M. glyptostroboides fossils were found in western Canada and date from the Cenomanian period of the Late Cretaceous, roughly 100 million years ago. The fossil evidence suggests that at one point M. glyptostroboides was a dominant and widespread member of deciduous forests in higher latitudes. The first living dawn redwood trees were found near 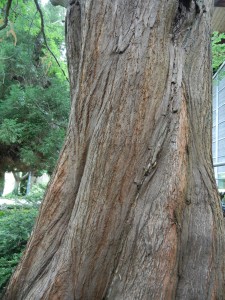 the Yangtze river in China in 1944. This discovery was the result of the attempt to classify a group of large unknown trees. After this discovery was made seeds were collected and sent to tree collections around the world. It is now grown in Europe and North America for preservation purposes as well as an ornamental tree, however the native region consists of only a few small populations in the Sichuan, Hubei, and Hunan provinces in China. These relic populations are extremely small and only exist as the trees were used locally as ornamental plants. Due to the small population size and distribution of the Dawn Redwood this species is classified as endangered by the International Union for the Conservation of Nature. 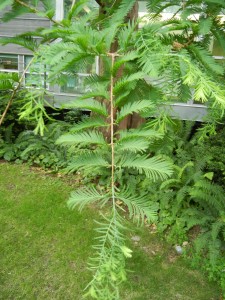 Metasequoia glyptostroboides is an interesting tree morphologically as well as historically, this coniferous tree can grow over 50 meters tall and 2 meters wide. The young bark is reddish-brown darkening to grey as it ages and is fissured in long vertical strips. Strangely for a conifer this species is deciduous, its needles turning reddish-brown and dropping off during the fall. This species is also monecious with male and female cones appearing on the same plant, and use wind dispersal for pollination. Like many other conifers the leaves of this species are reduced into large numbers of needles. 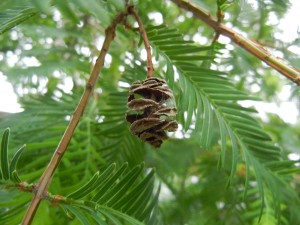 The dawn redwood has a long history of use as an ornamental plant, even before the discovery that it was the same species as found in fossils. This use is what preserved the small populations which still exist in China. After 1944 seeds from this tree were brought to Europe and North America and they were grown both in tree collections, for the purpose of preservation, as well as ornamentally. These trees became quite popular for ornamental purposes in Great Britain and in North America, in addition the ornamental use of this tree has increased in China, with several million trees planted every year. The logging potential of the dawn redwood was evaluated in 1948 and found to be not promising. Few other purposes for these trees exist, except perhaps as an important tree for scientific enquiry due to its nature as a relic of the Late Cretaceous.