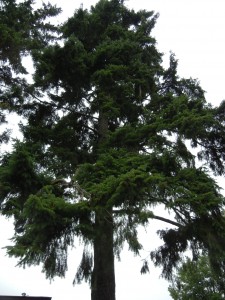 The Douglas-Fir, with the scientific name Pseudotsuga menziesii, is an evergreen conifer species native to western North America from the family Pinaceae. Its common name, Douglas-fir, is a misnomer as it is not a true fir from the Abies genus, hence the hyphenation in its name. In addition, it was given its own genus, Pseudotsuga, meaning false hemlock. P. menziesii. Its common name comes from the Scottish botanist and early explorer David Douglas. The specific epithet, menziesii, is after another Scottish botanist by the name of Archibald Menzies. It originates from Pacific Northwest and is abundant in western North America from British Columbia to Mexico. In this region, there are two varieties of the Douglas-fir: coastal and Interior. 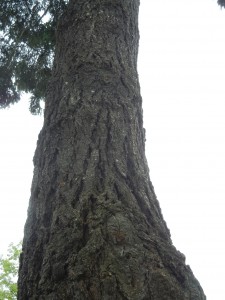 acidic pH of 5 to 6. It is a dominant keystone species that thrives in large areas and its success is due to the periodic recurrence of catastrophic wildfires that eliminated other species that were more vulnerable to wildfires. It has a lengthy lifespan, with the oldest specimen from Vancouver Island measuring a ring-count age of 1350. P. menziesii can be identified by the smooth texture and grey-brown colour of its distinctive bark that is embedded with resin-filled blisters. The bark thickens with age and becomes deeply grooved with dark reddish-brown ridges. 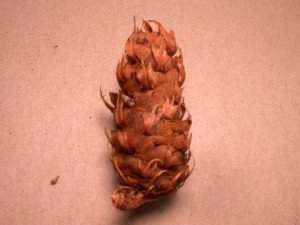 green or dark red in colour. The female cones have specialized modified leaves that are pitchforked-shape called bracts and can begin pollination immediately at maturity. Mature cones are 8 to 10 centimeters long and the bracts turn brown at maturity. Germination of seeds occur from mid-March to early April, but halts in the midsummer until April of the following year due to the high amounts of moisture of the season. Ideal conditions for seed germination include growth in moist, mineral soil, increased exposure to sunlight as the tree ages.

P. menziesii is widely used by Aboriginal people in southern British Columbia for its wood as a fuel source for pit cooking. The tree is also used to make fishing hooks and for carpentry in Aboriginal communities. It is also the one of the best timber producing trees and has a large importance in the logging industry. Hence, its wood is still highly valued for its strength and durability that makes it an ideal material for construction.