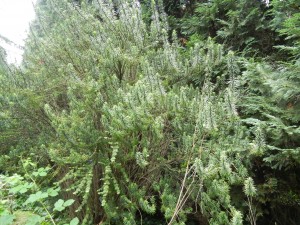 The common name of Cephalotaxus harringtonia is Japanese Plum Yew, named because its leaves resemble yew leaves and the fruit produced by female plants resemble small plums. It is one of the approximately 20 species in the family Cephalotaxaceae and all members of the genus Cephalotaxus are dioecious. In order for female plants to produce fruit, at least one male plant needs to be grown near the females for wind pollination to occur and fertilize the female plants. The Japanese Plum Yew is native to Japan and grows well in shady areas, preferring moist soils. 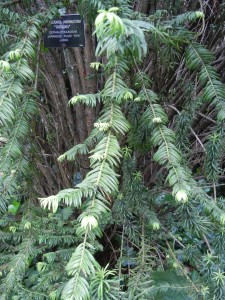 This conifer grows as a shrub or can be trained to grow up to 10m but does so quite slowly and can take up to 10 years to grow to a height of 1.2m. The crown of the tree is broad and rounded. Male cones are creamy yellow and are located underneath twigs while the globular female cones are found on branch terminals. Its fruit ripens on female plants in September and are 3cm long. The seeds look like green olives when young but as they mature, they turn brown. Its leaves are glossy green, 2.5-3.5cm long, slender and pointed. They grow on small yellow petioles in 2 ranks at a 45° angle. 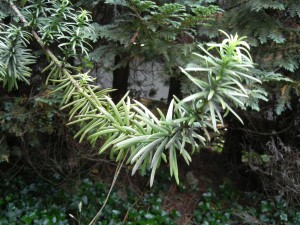 There are several different cultivars that exist. The cultivar on the UBC campus is called ‘Fastigiata.’ This cultivar grows straight up with leaves that are spirally arranged around the stem and resemble bottle brushes. Its stems grow erect, branching from the base of the tree with no branches at the top. The lower parts of the tree have side shoots that hang downward with leaves arranged in 2 ranks in the “V-shape” that is present in all branches of other cultivars.

The Japanese Plum Yew is a popular ornamental and landscape tree because it requires very little care. It is tolerant of heat, shade, and heavy pruning. The seeds are edible and are a popular food in Japan. An alkaloid compound called Omacetaxine mepesuccinate derived from the leaves of this tree is being developed into a drug for use against hematological cancers such as leukemia. Studies conducted show benefits in patients with myelodysplastic syndromes and acute myeloid leukemia but patients with solid tumours did not show any benefit.