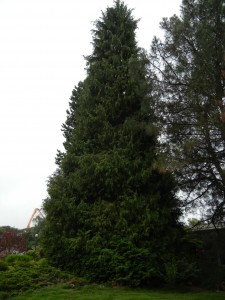 Chamaecyparis lawsoniana is known as Lawson Cypress or the Port-Orford-cedar and it is in the Cupressaceae family. It is named after Peter Lawson, who was a Scottish nurseryman who introduced this species into the horticultural world. Despite the fact that one of its common names calls it a cedar tree, it is a true cypress. It is found naturally along the coast in western North America from Oregon to California. The Lawson Cypress can grow in sandy or loamy soil but it prefers well-drained soil and can even grow in heavy clay.

When mature, the tree can reach a height of 50m with 3m DBH in a pyramidal shape. Its 2-3mm evergreen leaves are scale-like and are arranged in pairs that crisscross, resulting in visible white “X”s on the underside. The leaves are pinnately arranged to make up the flattened branchlet sprays that resemble fronds. The bark, reaching 20cm in thickness, is brown but may become gray-brown with age, often peeling in thin,

longitudinal strips. Lawson Cypress cones are small, with pollen cones measuring 2-4mm and seed cones measuring 8-12mm. The red to purple pollen cones are borne terminally while seed cones are blue-green when young and mature to a brown colour in 6-7 months with wrinkled scales. Each scale houses 2-4 seeds that are 2-5mm long. This species is monoecious, having both the female and male reproductive structures borne on the same tree. 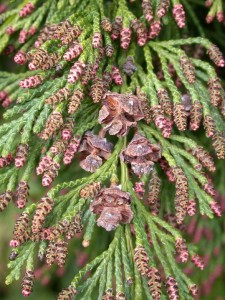 Lawson Cypress has been used in shipbuilding and other manufacturing products due to its close-grained, hard, and durable wood. Most of the wood that is harvested today is shipped to Japan, where its white, fragrant wood is used in the construction of traditional Japanese houses and temples because the wood is similar to hinoki (Chamaecyparis obtusa) wood. This species is polymorphic and there are many varieties that have been cultivated. It is a popular ornamental conifer species in the United Kingdom with mostly dwarf varieties being planted.

The tree is now in short supply due to logging without replanting since it is very susceptible to a root rot. It is not a good species to use to rehabilitate disturbed areas. Most of all the old-growth forests have been logged and the remaining trees of all ages are dying from a fatal root rot. It is caused by two soil-borne fungi, Phytophthora lateralis and Phytophthora cinnamomi. The fungus causes the leaves to change from normal blue-green to gold, bronze, reddish brown, and then lastly a dull brown. It moves from the root tips up through the tissue to the root crown and turns the roots dark brown and then black and rot within a few months. The spores are spread by water or are transported by people, machinery, and animals. To conserve the species, it is important to restrict road access to watersheds that contain unaffected organisms. As of now, there is no cure for the affected trees but there are ways to minimize the spread of root rot. If we prevent runoff water flow, minimize human activity, and plant the trees farther apart to minimize root overlap, the fungus would be less likely to spread to those trees.