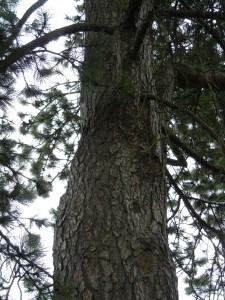 The Pinus ponderosa, commonly known as the ponderosa pine or western yellow pine, is part of the Pinaceae family. It is a large crowned tree characterized by a straight trunk with branches present mostly on the top-half of the tree. On average, it grows to about 25-30 metres in height and has a diameter of 2 metres. The needles, which are dark green to yellowish-green in colour, grow in bundles of three. The needles are 12-28 cm long and have an elongated, narrow shape with pointed tips and sharp, toothed edges. The needles remain on the stem for about 3-4 years and most of them drop in the autumn months of September and October. The cones are oval shaped and are 7-14 cm long with a sharp thorn at the tips of the scales. On young trees, the bark is brownish black and has a rough, scaly 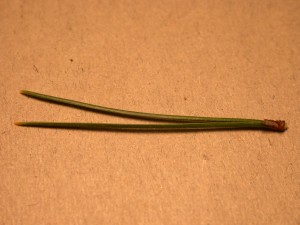 texture. On mature trees, the bark is thick, deeply grooved and is an orange-brown colour. The bark also has flat, flaky plates. The tree has a fibrous root system but possesses a strong taproot. The long root makes the tree able to withstand strong winds and also enables the tree to access the moisture present in deep soil.

The ponderosa pine reproduces by producing seeds. The tree possesses both 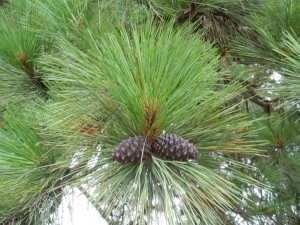 male and female reproductive structures called cones. The ponderosa pine is monoecious which means that female and male cones are both present on the same tree. The male cone produces pollen and fertilization occurs when the pollen comes into contact with an egg encased in the female cone. 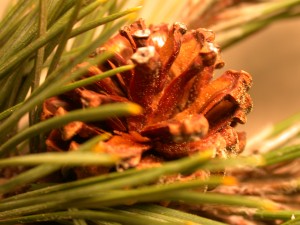 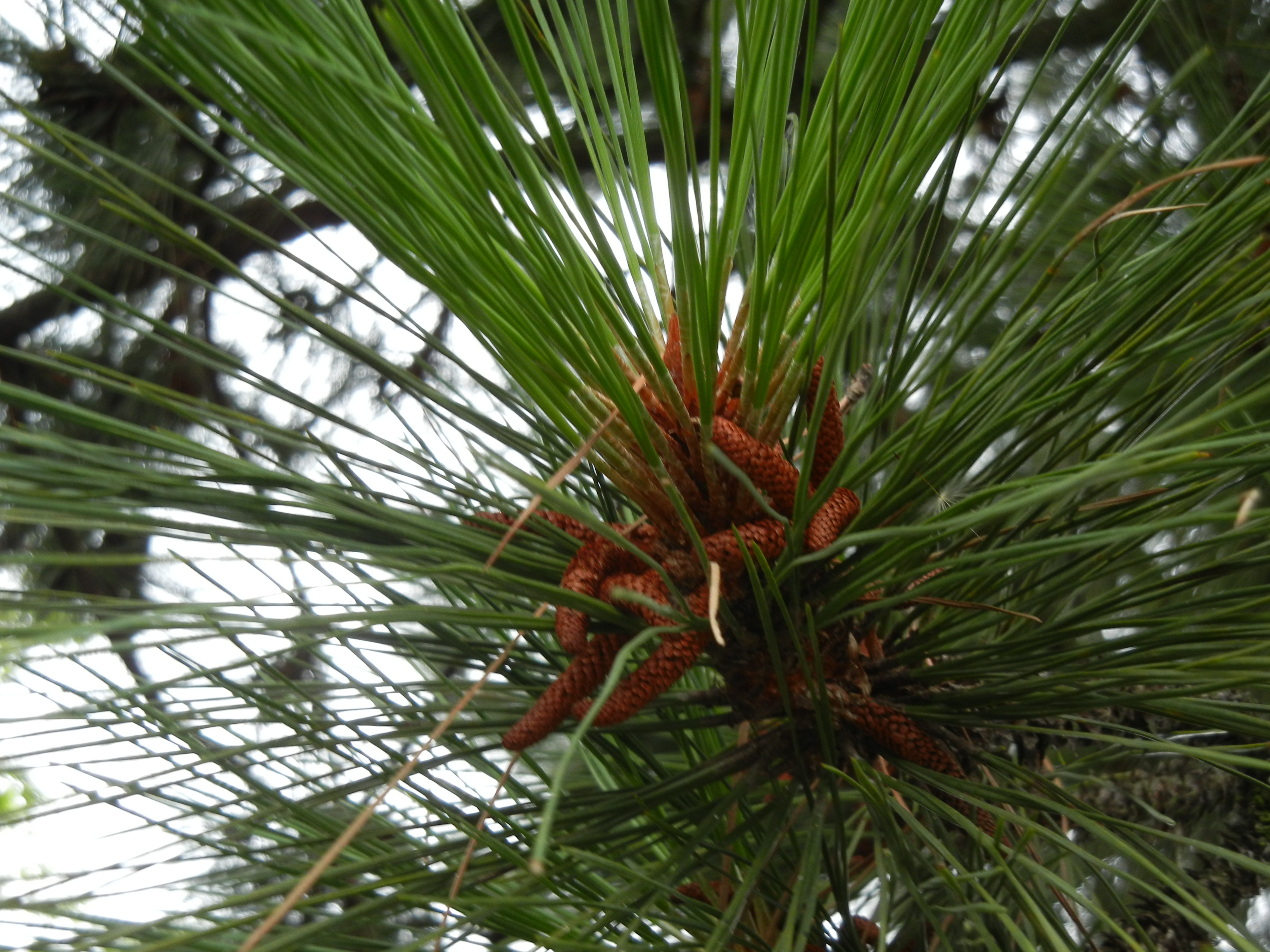 growth. The tree also requires full sun and is not shade tolerant. Fires are a frequent occurrence in ponderosa pine forests and the thick bark is adapted to protect the tree from ground fires that can set alight fallen needles and dead grass.

Bark beetles pose a very dangerous threat to ponderosa pine trees. They can cause death to the tree by transferring a blue stain fungus. Their larvae is able to devour the phloem of the tree inhibiting the flow of nutrients. The Dwarf mistletoe plant is also very dangerous to the ponderosa pine. It is a parasitic plant that causes branch and stem deformation of the ponderosa pine. It forces its roots into the phloem of the host branch causing instability of the wood. This causes the tree to be susceptible to fungal infections and attacks by insects.

The ponderosa pine is used in a variety of different ways. The Aboriginal people of British Columbia used the seeds and inner bark of the tree as a source of food. The sap of the tree was used as a waterproofing agent for moccasins and other items. On occasion, they also mixed the sap with grease and used the mixture as a medical ointment for treatment of boils, backaches and inflammations of the body. The roots of the tree were used to make blue dye and the needles were used as an insulation material for underground storage pits. The wood was primarily used for making fence posts and to fabricate snowshoes. The logs of the tree were also used to make canoes.

Various forms of wildlife also significantly depend on the ponderosa pine. Mice, porcupines and other rodents use the bark as a nesting site. Furthermore, the pine needles are an important food source for blue and spruce grouses. Birds also use the tree for cover and nesting sites.

Since the ponderosa pine tree grows relatively fast and has the ability to firmly anchor in a variety of soils, the tree is often used to provide erosion control on rehabilitated sites due to its ability to act as a wind breaking species. However, the ponderosa pine’s most popular use in modern society is in the millwork industry where the lumber is used for various construction work. This includes using the wood to make doors, windows, cabinetry and furniture.

Overall, the ponderosa pine possesses a variety of structural elements that allow it to acclimate to a range of climates and environmental factors. The tree provided many uses to the Aboriginal people of British Columbia due to its durable, strong wood and soothing properties of its sap. Even today, the wood is extensively found in furniture and cabinetry. The tree also provides a nesting habitat for a variety of animals. However, pests such as bark beetles and dwarf mistletoe plants threaten to destroy the tree and eliminate the ecological and economic value that the ponderosa pine tree is able to provide. Therefore, more research into pest control should be conducted in order to preserve the ponderosa pine.