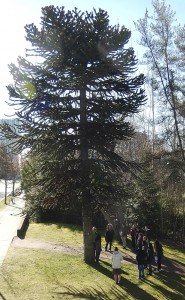 Araucaria araucana is a member of the Araucariaceae family and is most commonly known as the monkey puzzle tree, monkey tail tree, pino Chileno, or the Chilean pine. A. araucana is known as the monkey puzzle tree because people thought that it would puzzle a monkey to climb the spiky branches.  It is an evergreen conifer that was first found by a Spanish explorer in 1780 and was then introduced to England in 1795. A. araucana is natively found in central and southern Chile and western Argentina about 1,000 m and above the Andes and is known to be the national tree of Chile. 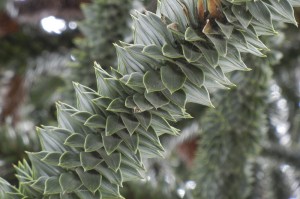 Araucaria araucana have thick, tough and scale-like leaves that are triangular in shape, 3 to 4 cm in length and 1-3 cm wide at the base. A. araucana can grow up to 98 feet tall and 49 feet in width; however, it grows at a fairly slow rate. 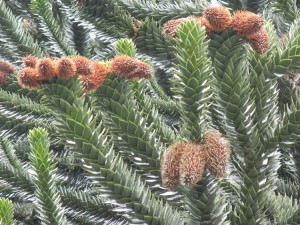 A. araucana is dioecious for having the male and female cones on different trees; the male cone resembles the shape of a cucumber and can enlarge to 12 cm in length and 6 cm in width, the female cones are globular in shape with a diameter ranging from 12 to 20 cm which can hold up to 200 seeds. 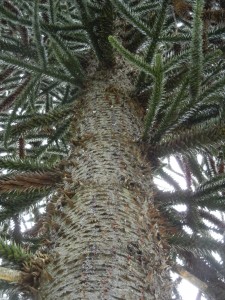 Araucaria araucana have both edible and medical uses. The seed of A. araucana is very delicious and soft in texture which has a similar flavour as the pine nuts. The resin collected from truck incisions is used for several medicinal purposes such as the treatment of ulcers.