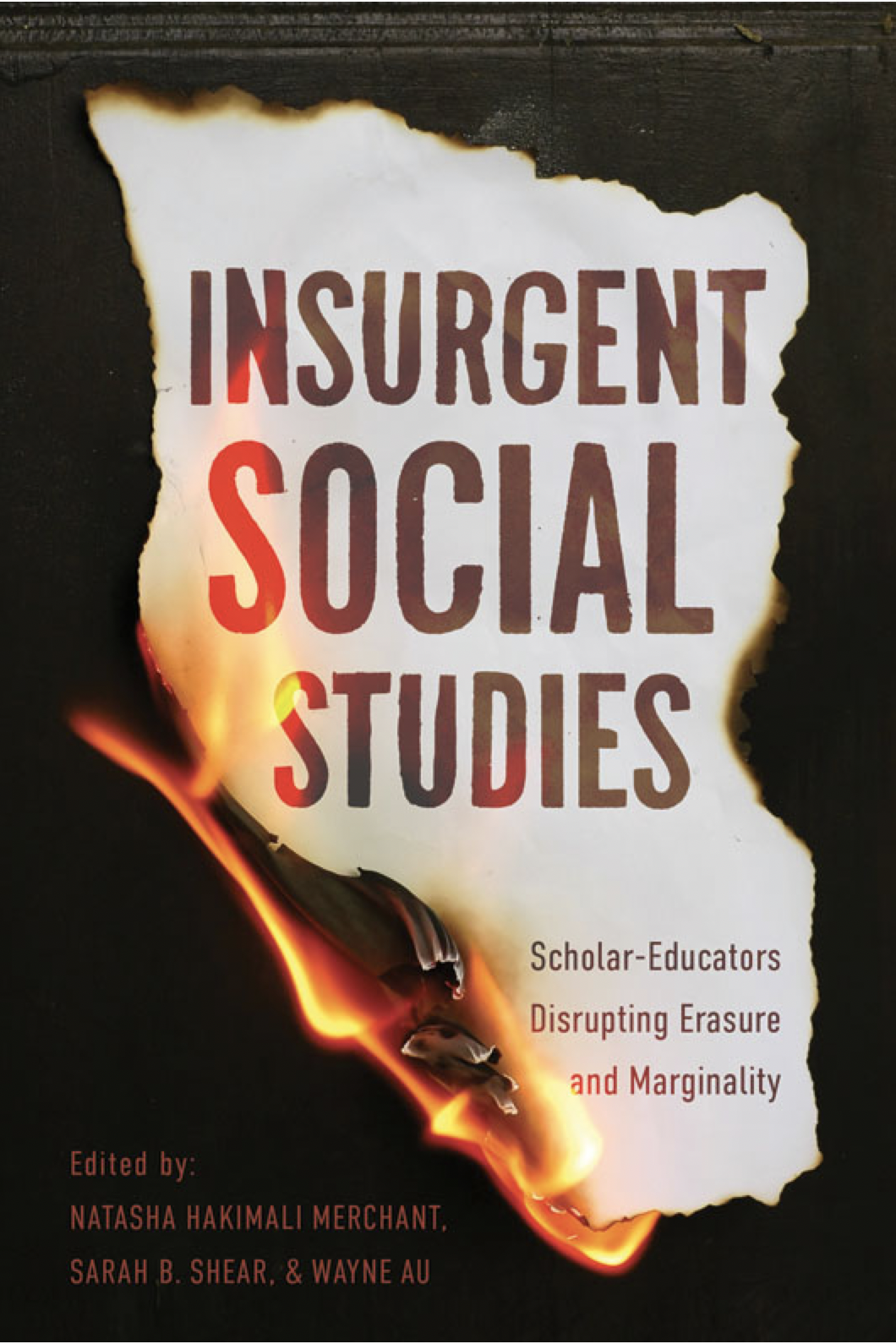 The collection brings together contributions from a “new(er)” generation of social studies scholar-educators who take as one of their starting points a social studies curriculum that is “designed to erase or otherwise marginalize voices, bodies, and experiences not accepted by or created for the benefit of white supremacist society.”

The project was inspired by Wayne Au’s conception of pedagogy of insurgency. Au describes this kind of pedagogy as requiring:

The editors, Natasha Hakimali Merchant, Sarah B. Shear and Wayne Au, argue that “taken as a whole, a pedagogy of insurgency seeks to understand and at least partially explain the ways that teachers have the power – through pedagogy, curriculum, and community activism – to actively resist injustice while also working towards a more radically just world.

This is a path-breaking work in social studies education and anyone who is engaged and the political/pedagogical struggles for social justice in schools and the larger society will benefit from reading this collection.

I want to thank the editor for inviting me to write a brief Afterword.

Introduction – We Won’t Wait Any Longer: An Introduction and Invitation to Insurgency for Social Studies
Natasha Hakimali Merchant, Sarah B. Shear, and Wayne Au

2. Solidarity Is a Verb: What the Black Lives Matter Movement Can Teach Social Studies About the Intersectional Fight Against Anti-Black Racism
Tiffany Mitchell Patterson

3. The Audacity of Equality: Disrupting the Distortion of Asian America in Social Studies
Noreen Naseem Rodríguez and Esther June Kim

First Peoples, Palestine, and the Crushing of Free Speech

A talk by Professor Steven Salaita, who is at the centre of an international protest against academic censorship.

Salaita, author of six books and many articles, was “unhired” from a tenured position in American Indian studies at the University of Illinois when donors pressured the university because of Salaita’s tweets on his personal Twitter account about the Gaza massacre last summer.

Because this action is widely recognized as part of a broad effort to silence voices for Palestinian rights and justice, and as one incident in the long history of colonial treatment of indigenous peoples, the case has attracted international attention.

Salaita’s books will be available at this event.

“Steven Salaita & Academic Censorship“: an interview on Voice of Palestine

At North Carolina State University (NCSU), shortly after Dr. Terri Ginsberg made supportive political comments at a screening of a Palestinian film in 2007, she went from being the favored candidate for a tenure-track position to being denied even an interview.  Her efforts at redress were summarily rejected by NCSU and two courts.  A jury should be permitted to decide whether NCSU’s real reason for firing Dr. Ginsberg was its hostility to her political views, but this legal right has been denied.  We urge the Supreme Court of North Carolina to review Dr. Ginsberg’s case and to reverse the lower courts’ decisions to dismiss it.  On this basis, faculty at NCSU and elsewhere may finally exercise their legal right to academic speech on the topic of Palestine/Israel and, as such, to their full human rights as scholars, teachers, and intellectuals in the academic community.

To support this request to the NC Supreme Court, we invite academic faculty and students worldwide to sign our Open Letter as an e-petition at this URL:

You are also encouraged to send your own letter to:

U.S. Campaign for the Academic and Cultural Boycott of Israel (USACBI) http://www.usacbi.org

“Our New Iraq-Afghanistan War National Holiday”
By David Swanson, War Is a Crime.org, posted May 29

“How America Screws Its Soldiers”
By Andrew J. Bacevich, The Daily Beast, posted May 28
The author teaches history and international relations at Boston University.

“Netanyahu’s Border War”
By Shlomo Ben Ami, Truthout.org, posted May 28
The author is a history PhD and a former Israeli foreign minister.

“Parallel States: A New Vision for Peace”
By Mark LeVine and Mathias Mossberg, Aljazeera, posted May 28
Mark LeVine teaches history at the University of California, Irvine.

“Washington’s Weapon of Choice”
By Sherry Wolff, SocialistWorker.org, posted May 24

“Deception and Diplomacy: The US, Japan, and Okinawa”
By Gavan McCormack, Asia-Pacific Journal, posted May 23
Makes extensive use of documents released by Wikileaks

Recent articles recommended by Historians Against the War:

“Revealed: US Spy Operation That Manipulates Social Media”
By Nick Fielding and Ian Cobain, The Guardian, posted March 17
On a Pentagon contract for the creation of false on-line identities, known as “sock puppets”

“Korean War Coverage Was Distorted and Suppressed”
By Sherwood Ross, OpEdNews, posted March 17
Based on interviews with Korean War historian Bruce Cumings of the University of Chicago

“How the Japanese Learned about ‘Nuclear Safety’”
By Lawrence S. Wittner, History News Network, posted March 17
On the 1954 “Lucky Dragon” nuclear incident; the author is an emeritus professor of history at SUNY Albany

“The Shameful Abuse of Bradley Manning”
By Daniel Ellsberg, The Guardian, posted March 11

The Arab Spring”
By Rashid Khalidi, The Nation, March 21 issue, posted March 6
The author teaches the history of the modern Middle East at Columbia University

“The Long History of Labor Bashing”
By Nelson Lichtenstein, The Chronicle Review, posted March 6
The author teaches history at the University of California Santa Barbara