My father passed away on May 12th in Chilliwack, the community where he had lived since 1964, when my father and mother bought the farm where I would grow up. The home site was north of the town, a short walk from the Fraser river. During most of the almost 40 years that my father farmed there, he owned some property that fronted on the Fraser river. The river was always a fixture in our lives, from its recreational opportunities to the challenge it posed to the farm. 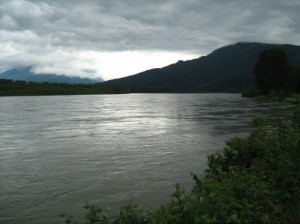 At one point, near the end of my father’s life, I was wandering along Ballam Road near the river. Being May, the freshet was underway and the river was rising. Watching the swirling and churning muddy waters of the Fraser reminded me of the many times I had done that, both from the bank and from a boat on the river. We had often enjoyed Sunday afternoons drifting down the river in a rowboat, my father’s strong arms pulling at the oars, keeping us aligned so that the current would move us from one side of the river to the other and back again. At other times we would have a motor, and explore different parts of the river. We would marvel at the power of the current as it progressively tore away Carry Point (Chilliwack Times, June 12, 2012), or at the mixing of the clear water of the Harrison River with the muddy Fraser. 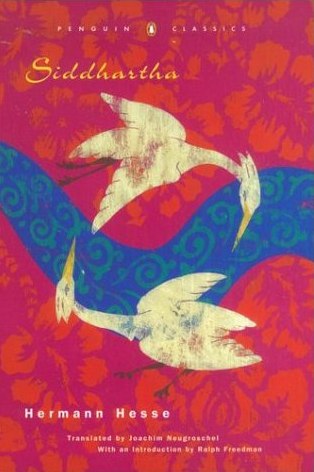 Watching the swirling river, listening to the sounds of the ripples lapping the shores, the air sucked under where an eddy descended hissing back to the surface, reminded me of a novel by Herman Hesse, Siddhartha (Online Literature). The novel is a story of one man’s journey to enlightenment, and the final stage of that journey occurs under the tutelage of the ferryman Vasudeva. Vasudeva’s kindness, patience, and gentle direction helps Siddhartha to listen to the river. He learns to let go of himself and to live in compassionate connection with the flow of all life, just as the river flows on.

Water is the chemical combination of one oxygen atom and two hydrogen atoms. Water, and its properties as a solvent, are the cradle of life on earth. As far as we know, life first evolved in the primordial soup of the early earth and then crept onto the land when that very life had transformed the atmosphere to resemble the one we breath today. We, and all living organisms on this planet are “bags of mostly water”, to poach from Star Trek (Youtube). Organisms that are not extremely efficient in their water management cannot travel far from water or their survival is threatened. It therefore isn’t surprising that this simple chemical has become such a central part of almost all cultures. In my Roman Catholic heritage, water is central to the sacrament of baptism, and the coffin is blessed with a sprinkling of holy water during the funeral service. In some aboriginal cultures, rivers are living beings. In Hindu culture, the Ganga is the goddess of the holy Ganges. It isn’t surprising therefore that we have attached such meaning to water, and why decisions about how to allocate water when there isn’t enough to satisfy everyone are so hard.

Flowing water is like the flow of life, and we are immersed in that flow far more than we are observers of it.

From Chapter 11 of Siddhartha:

When he had finished talking, Vasudeva turned his friendly eyes, which
had grown slightly weak, at him, said nothing, let his silent love and
cheerfulness, understanding and knowledge, shine at him. He took
Siddhartha’s hand, led him to the seat by the bank, sat down with him,
smiled at the river.

“You’ve heard it laugh,” he said. “But you haven’t heard everything.
Let’s listen, you’ll hear more.”

They listened. Softly sounded the river, singing in many voices.
Siddhartha looked into the water, and images appeared to him in the
moving water: his father appeared, lonely, mourning for his son; he
himself appeared, lonely, he also being tied with the bondage of
yearning to his distant son; his son appeared, lonely as well, the boy,
greedily rushing along the burning course of his young wishes, each
one heading for his goal, each one obsessed by the goal, each one
suffering. The river sang with a voice of suffering, longingly it sang,
longingly, it flowed towards its goal, lamentingly its voice sang.

Siddhartha made an effort to listen better. The image of his father,
his own image, the image of his son merged, Kamala’s image also appeared
and was dispersed, and the image of Govinda, and other images, and they
merged with each other, turned all into the river, headed all, being the
river, for the goal, longing, desiring, suffering, and the river’s voice
sounded full of yearning, full of burning woe, full of unsatisfiable
desire. For the goal, the river was heading, Siddhartha saw it
hurrying, the river, which consisted of him and his loved ones and of
all people, he had ever seen, all of these waves and waters were
hurrying, suffering, towards goals, many goals, the waterfall, the lake,
the rapids, the sea, and all goals were reached, and every goal was
followed by a new one, and the water turned into vapour and rose to the
sky, turned into rain and poured down from the sky, turned into a
source, a stream, a river, headed forward once again, flowed on once
again. But the longing voice had changed. It still resounded, full of
suffering, searching, but other voices joined it, voices of joy and of
suffering, good and bad voices, laughing and sad ones, a hundred voices,
a thousand voices.

Siddhartha listened. He was now nothing but a listener, completely
concentrated on listening, completely empty, he felt, that he had now
finished learning to listen. Often before, he had heard all this, these
many voices in the river, today it sounded new. Already, he could no
longer tell the many voices apart, not the happy ones from the weeping
ones, not the ones of children from those of men, they all belonged
together, the lamentation of yearning and the laughter of the
knowledgeable one, the scream of rage and the moaning of the dying ones,
everything was one, everything was intertwined and connected, entangled
a thousand times. And everything together, all voices, all goals, all
yearning, all suffering, all pleasure, all that was good and evil, all
of this together was the world. All of it together was the flow of
events, was the music of life. And when Siddhartha was listening
attentively to this river, this song of a thousand voices, when he
neither listened to the suffering nor the laughter, when he did not tie
his soul to any particular voice and submerged his self into it, but
when he heard them all, perceived the whole, the oneness, then the great
song of the thousand voices consisted of a single word, which was Om:
the perfection.

Brightly, Vasudeva’s smile was shining, floating radiantly over all the
wrinkles of his old face, as the Om was floating in the air over all the
voices of the river. Brightly his smile was shining, when he looked at
his friend, and brightly the same smile was now starting to shine on
Siddhartha’s face as well. His wound blossomed, his suffering was
shining, his self had flown into the oneness.

In this hour, Siddhartha stopped fighting his fate, stopped suffering.
On his face flourished the cheerfulness of a knowledge, which is no
longer opposed by any will, which knows perfection, which is in
agreement with the flow of events, with the current of life, full of
sympathy for the pain of others, full of sympathy for the pleasure of
others, devoted to the flow, belonging to the oneness.