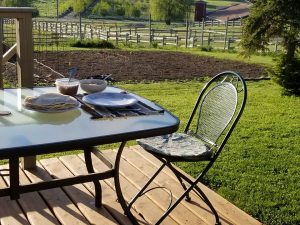 I spent the Mother’s Day weekend with my mom, although she passed away almost ten years ago.  One way I keep her memory alive is by cooking special breakfasts – crepes this day – sometimes for myself, and particularly when I have the chance to do so for family.  The other is to plant a vegetable garden.

There is no good financial reason for me to grow vegetables.  The time I have spent growing food could have gone towards furthering my career, and the resultant increase in my salary would more than pay for what it would cost me to buy the food I grow.  However, over the nine years I have lived on this property and tried to grow something, I have learned about this land.  I have learned that when the balsam root and saskatoon blossoms are passing their peak, the soil temperature is about right for planting.  I have learned that there is a narrow window of soil moisture during which Glenmore clay can be easily worked.  I have learned that after one season there won’t be much organic material left in the garden and the remaining clay will set up like concrete when baked in the sun.  I have learned that carrots don’t grow well in this clay, and neither do acid loving blue berries.  I have learned many different things, some of which are more of a feeling than a fact I can easily describe. 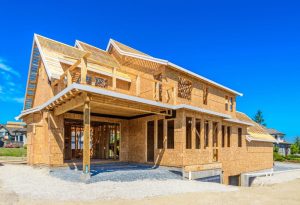 My ruminations on these matters have been particularly strong since my colleague, Dr. Ross Hickey, suggested that getting rid of the Agricultural Land Reserve (ALR) would help address the high cost of housing here in Kelowna (Let’s Develop the ALR).  There is a beautifully simple logic to his argument.  The price of housing is high because supply isn’t expanding fast enough to keep up with the growth in the demand for housing.  The ALR makes some land unavailable for housing, and some of this land is ideally located and relatively cheap to service.  If land availability is the restriction preventing an increase in the housing stock, then getting rid of the ALR will lead to an increase in the rate at which new housing is build and thereby bring down the price.  If land is simply a physical space which can be used for a variety of purposes – housing, transportation, parks, wild spaces, food production, … – then it follows that each piece of land should be put to that use which generates the greatest value for society.  To the extent that the market does the best job possible of reflecting these values, an unrestricted land market should yield the best pattern of land use. 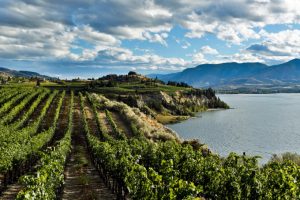 One place to challenge the effectiveness of a free land market is to consider the variety of services that the land provides which are not captured by that market.  Viewscapes, open spaces, natural habitat, etc. are such services.  These services have value, and in principle if we could measure the value of these services, we could put in place policies, such as taxing particular land use activities and subsidizing others, to adjust the land use pattern that would prevail with a free land market.  Many economists have been arguing for such an approach and seeking to improve methods of valuing these services.  With such measurements, we can calculate the return paid by the land for one purpose, and thereby determine if it should be kept as ‘natural capital’ or developed for other purposes.  However, not everyone buys the idea that putting a price on nature can help save it.

In a recent column George Monboit (“The UK government wants to put a price on nature – but that will destroy it“) strongly rejects the idea of valuing the services of nature.  He argues that determining the value of nature based on the price people are willing to pay for the services nature provides diminishes nature having value in its own right, having ‘intrinsic’ value.  He concludes with

Those of us who are motivated by love for the living planet should not hesitate to say so. Never underestimate the power of intrinsic values. They inspire every struggle for a better world.

Within economics, intrinsic value, the value a thing has in itself, is recognized for humans.  Economists have many times been asked to calculate the value of investments that change the probability of someone dying, investments such as roadway design and safety regulations.  Initially, the value of life was based on lifetime earnings.  However, it didn’t take long to see the moral issue here, that people who were no longer making a productive contribution have a zero or even negative value.  Currently, economists try to measure what people themselves are paying to reduce their probability of death.  Measuring what people are willing to pay to reduce their own risk exposure is, in effect, asking what their intrinsic value is.  However, this idea has not moved much beyond valuing mortality risk for people.  Can it be extended? 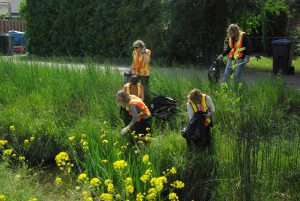 We have learned that the amount of knowledge people have about the environment and their attitudes towards the environment are at best only weakly related to environmental behavior change (Kollmuss and Agyeman, 2002).  Some work is showing that empathy for the environment can motivate change (e.g. Berenguer, 2007 and work described in Greater Good Magazine).  Empathy is the ability to feel what another is feeling, in response to knowing the situation they are in.  Empathy is correlated with compassion, and compassion with making choices for the well being of others.  And this is strongest when there is a relationship.  Monboit’s critique points out that when we value the natural world based on the services it provides us, we undermine the relationship that fosters empathy.  His appeal to “Those of us who are motivated by love for the living planet …” clearly emphasizes the idea of a relationship with that living environment.

Economic efficiency occurs when all resources are put to their most valuable use, and in a dynamic economy, these resources should be as mobile as possible.  Innovation is fostered by enabling those who develop new products that are valued in the market to capture a large share of the profits.  Those who are unable or unwilling to move to the jobs and/or to be innovators are ‘left behind’.  This system discourages attachment to ones local community and environment.  Best to maintain an extensive network that can facilitate moving, if that is required, rather than in building strong local connections that will be of limited value after a move.  Best not to invest too much in a relationship with the local environment, as that investment is lost if one moves.

How, with an economic system that rewards flexibility, mobility and innovation can we create a space for people to have a relationship with the environment that builds empathy and compassion, and thereby motivates people to care for that environment?  Our economic system has done a tremendous job of stimulating technical progress and raising the living standard of many people around the world.  However, this progress has occurred while the environment has been treated primarily as a ‘factor of production’, providing resources and assimilating waste.  How can we recognize the intrinsic value of the living systems we share the planet with in the same way we do for the other humans we share the planet with?  Recognizing (although not necessarily respecting) the intrinsic value of all humans occurred relatively recently in the history of our species.  Through much of that history in many societies slavery was acceptable and women were treated little better than property.  Now, in most societies, all people have basic legal protections.  Do we similarly need to have basic legal protections for the natural world? 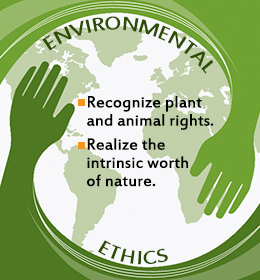 The natural world, be that a species or an ecosystem, cannot express its intrinsic value through market activities the way humans can.  We cannot therefore observe such choices and impute the value that a species or ecosystem is willing to pay to protect its functionality.  Perhaps our moral duty to the natural world is to protect its functionality.  If we have an economic system that makes it difficult for people to develop empathetic, compassionate relationships with the land, maybe the land has to be given rights.  Perhaps policies like the ALR are imperfect ways to provide the land with some rights.  If we lack the empathy and compassion to treat women and members of minority groups with respect, then we are compelled to provide at least some basic respect by the law.  Is it time to give the natural world this same type of protection?