When it comes to the environment we interact with on a daily basis, local government makes most of the important decisions.  I was reminded of this again recently when a notice for a public meeting about a rezoning proposal arrived in the mail.  Federal and provincial governments set some rules.  However, within the bounds of those rules, and sometimes in spite of those rules, local government decides how land will be used, and those land use decisions affect the environment that we interact with most often. 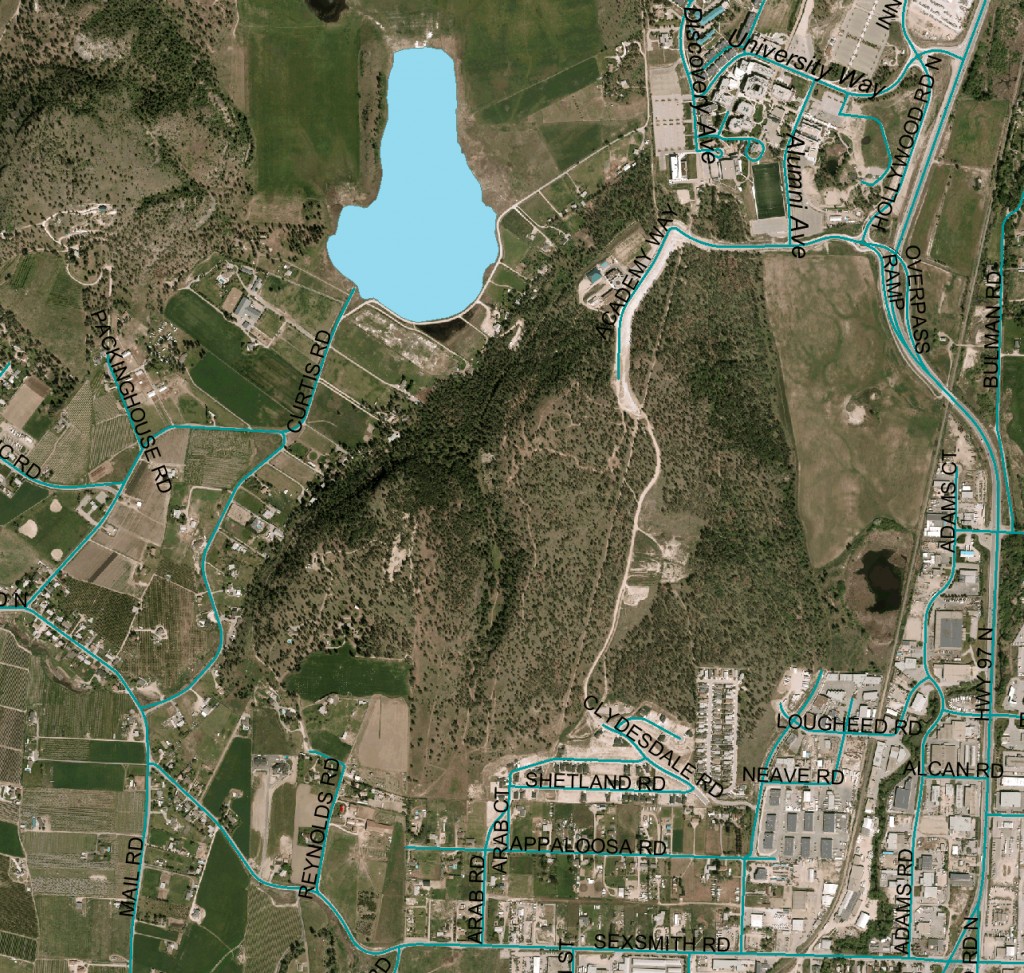 Academy Way heads south from the current end of John Hindle Drive, on the south side of the UBC Okanagan campus.  Right now Academy Way provides access to Aberdeen Hall Preparatory School (www.aberdeenhall.com), an exclusive private school.  Most of the remainder of the hill south of campus and Aberdeen Hall is largely undeveloped.  For many years there has been a small herd of cattle ranging over the hill.  However, this hill has long been within the long term growth plan for the city, and recently the owner and the city have negotiated a zoning change to adjust property boundaries in preparation for developing the hill. 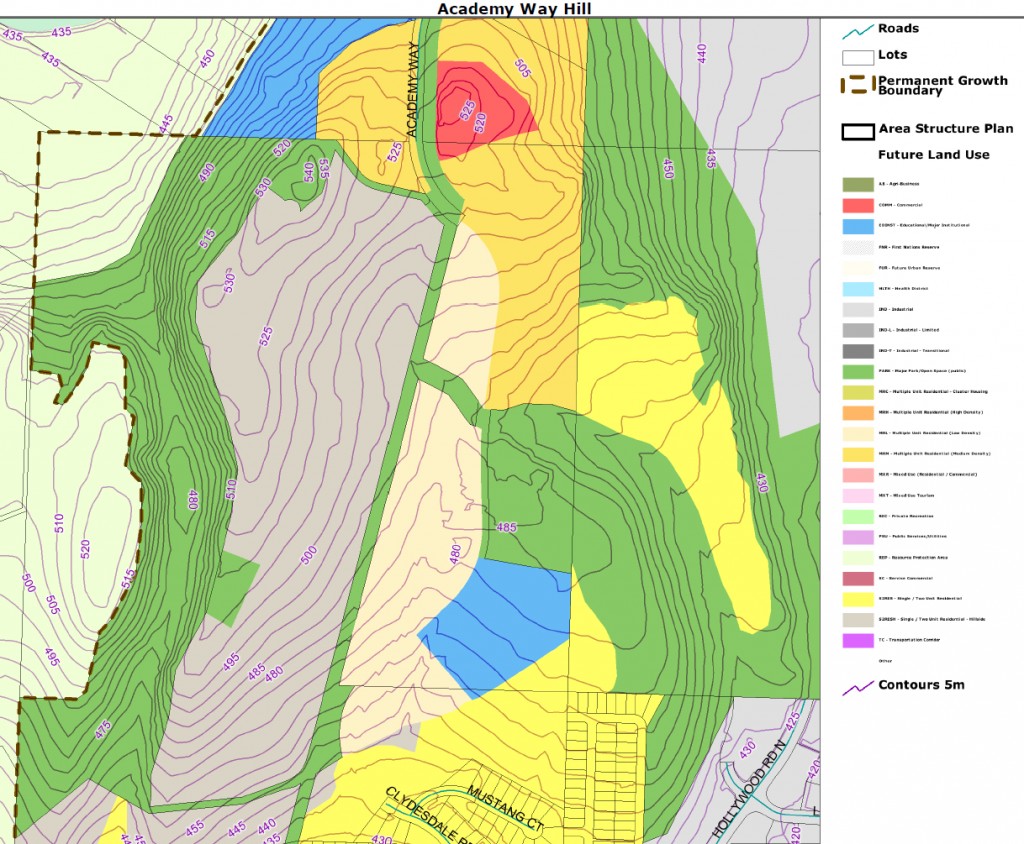 The results of the boundary adjustment are shown in the map above.  Prior to the adjustment, there was one large rectangular parcel, the top left corner coinciding with the corner in the permanent growth boundary.  The bottom right corner was just below and right of the small blue colored patch, an area designated as a future school.

The deal between the city and the land owner included the land owner ‘gifting’ to the city for park purposes a ravine on the western side of the property, and some steep hillside along the northwest of the parcel, and some other steep or otherwise unusable (e.g. a pipeline right of way) lands.  That the ravine will be part of the city parkland is certainly a good thing.  It is a nice spot.  However, it isn’t really much of a gift, as there would not be any profit in developing it anyhow.

I also recently received an email inviting me to participate in a survey about what makes strong neighbourhoods.  Great cities have strong neighbourhoods, neighbourhoods where people feel a connection to their place, and have relationships with their neighbours.  As I look around and watch development taking place in areas I am familiar with, I have come to wonder how much the shape of our development contributes to that sense of place?  Do we need to have a boundary to feel a sense of place?  When we live in a village, the village has a clear edge.  I wonder if strong neighbourhoods need boundaries?  In particular, what do the hills around Kelowna contribute? I see houses sprouting up on tops of hills, and to me this reduces my sense of place.  Whenever I look at the hills and see houses on top of them, I am visually reminded that the city continues over the hill and down the other side.  I know that a few houses on the hill doesn’t really change much about the city, but it does impact on the way I feel.  Is this just me, like so many other migrants to Kelowna, lamenting that things continue to change after I move here, or is there more to it than that?  I would love to know what urban planners, geographers and others who know more about what makes people feel a sense of place know about these issues.

The length of the hill is a bit under one kilometer, so a 20 meter wide strip would be getting close to 20,000 square meters, or towards two hectares.  A quarter acre lot is about 1,000 square meters, which means maybe 20 lots would be lost to development.  Taking account of the fact that these lots would have a view, they should be compared to other vacant lots nearby.  589 Harrogate Lane (0.2 acres), on Dillworth Mountain, is listed at $259,900.  2005 Capistrano Drive (0.259 acres), on Quail’s Ridge, is listed for $239,900.  These lots have road access, and services to the edge of the lot.  Costs have not yet been paid to put these in on Academy Way Hill.

Based on a study by Canada Mortgage and Housing, (http://www.cmhc-schl.gc.ca/publications/en/rh-pr/socio/socio026.pdf), the infrastructure ’emplacement’ cost for a conventional subdivision – similar lot sizes to those used above – is almost $35,000 per lot and a life cycle cost of a bit over $125,000 per lot.  This is for a subdivision near Ottawa.  Within Kelowna, the city charges a development cost charge of a bit over $20,000 per lot in this area, and Glenmore Ellison Irrigation District levies its own charges.  Development cost charges are levied to offset the impact of new development on existing city infrastructure off the site.  So, the developer is looking at costs likely approaching $60,000 per lot.  Including an assortment of ‘soft’ charges, from marketing through engineering and legal fees, the total cost per lot is probably around $100,000 (with quite a range for ‘around’).  The land also has to be bought by the developer, as the current owner stated at the public meeting that his plans are to sell.  What is the land worth?  19.5 acres at 749 Highpointe Drive is currently listed for three million, and there is a claimed development potential of 38 lots.  This is a bit under $80,000 per lot.

So, these are a whole lot of calculations done to guess the profit from developing the land.  However, the land has not been developed, and based on a reasonably comparable property, it is probably worth no more than $80,000 per lot in its present form.  It is likely worth less, as it isn’t as well connected to existing city infrastructure and is further away.  Pure speculation on my part says choose a number of about $60,000 as the per lot sales value of the property, and thus the loss to the owner if twenty lots could not be sold is $1.2 million.  The cost, therefore, of setting this land aside might be as high as $1.2 million.

Now, this $1.2 million is a one time cost.  We can translate this into an annual cost by imagining that the owner could invest the money.  If the money can be invested at 5%, then the return would be $60,000 per year.  To be worth setting aside, the benefits of protecting this land has to be at least $60,000 per year.

To get a value for the trail, we need a value to represent the enjoyment that someone gets from using the trail.  It is pretty hard to put a dollar value on an emotion, but we can indirectly do it by considering the cost of accessing the trail.  For that, consider the alternatives.  The trails north of the university or the Mission Creek Greenway would seem to be the closest alternative, although for a trail with a view, one would have to go to Knox Mountain.  Travelling from the future Academy Hill neighbourhood to the university, parking, and then returning is a few minutes in a vehicle each way and parking cost.  Mission Creek Greenway is a bit further, but no parking cost.  Knox similarly has no parking cost, but is even further away.  If this trail is built, we could also expect people from elsewhere in Kelowna to come and enjoy it.  The Greenway is about 8 km away, and Knox is about 10 km.  Going both ways, and using the UBC mileage rate of $0.49 per km that is paid when we use our personal vehicles for work, leads to a transportation cost of $8 to $10.  This does not include anything for the value of the time spent traveling that could be used for other things.  So, a walk on this proposed trail can be said to have a value of at least $8, and for simplicity, say $10.  Anyone from the new neighbourhood that uses this trail is able to do so for free, rather than incurring a cost of about $10 to go somewhere else for a similar experience.

We need to get $60,000 in benefits every year to justify this trail.  If each use of the trail is worth $10, then we need 6,000 visits per year.  There are 365 days in a year, so that works out to just over 16 visit per day.  We don’t have to have a very intense use rate to make this trail idea economic.  By comparison, the Mission Creek Greenway sees over 1,000 people per day (RDCO).

I attended a public meeting about some boundary adjustments related to the rezoning of the hill.  The meeting focused on some small changes around the edge that were not precisely consistent with the Official Community Plan (OCP).  The main boundary changes had been completed months earlier, with most of those following lines drawn as part of the OCP process.  This fact left me wondering if we are using the OCP in the right way.  I have attended meetings and given input during public consultations around the OCP.  These consultations deal with high level concepts – do we want sprawl or tight town clusters, etc.  Most of the feedback relates to these broad concepts.  However, it is translated into precisely drawn lines on a map, and zoning changes are then made with no further opportunity for public input.  Is this right, or should the OCP be drawn with ‘fuzzy’ lines, and when the need arises to put in the details, further consultation be undertaken?

At the meeting, I struggled to figure out how best to speak to the issue.  I could stand up and argue that this new parkland was not really a gift, as it was not profitable to develop anyhow.  If anything the owner had dumped a chunk of useless land onto the city, which might mean that the city is now liable for providing fire risk reduction and other such services to this park, and thereby actually increasing the value of the land that can be developed.

I chose instead to simply describe the idea of adding a hilltop trail and suggest that it would be a valuable addition to the other parkland that had been transferred to the city.  My naive hope was that there was some scope for the city and the landowner to work together to implement something like my suggestion.  However, the owner made it very clear that in his opinion, he had given a lot to the city already, and wasn’t giving any more.  Unfortunate, but I don’t imagine I would be eager to give up a million dollars either.  I guess this means that any hope for adding a couple of hectares, out of likely around 50 hectares of developable land, rests with the willingness of the future developer to work with the city.

There are developers in our community who care very much about the legacy they leave behind with the projects the build.  I hope that when development proceeds on this hill, such a developer is in charge.