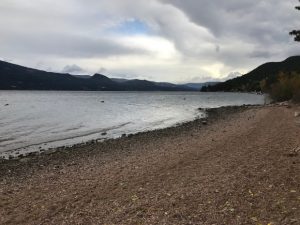 Recently, Gable Beach Park in Lake Country has been in the news (CBC News, Oct 18, 2017).  The District of Lake Country has been negotiating with three land owners who wish to purchase a strip of land that the district owns, a strip of land that extends north along the lake from the park for almost 200 meters.  Some local residents want to see the land remain in public hands, and hope that the district will not follow through to conclude the negotiations with a sale (Lake Country Calendar, Sept 5, 2017). 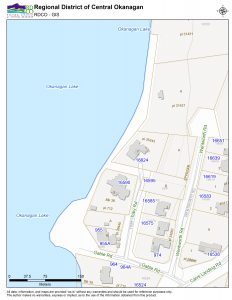 This strip of waterfront land accounts for a bit more than half of the total public lake shore that Gable Beach Park provides.  At present, this part of the park is undeveloped, used only by people who know it is public land and who walk north from the nearest access road to enjoy it.  If the land remains public, then it would be available to develop a pathway, as well as some picnic tables and/or benches above the high water mark.  Such structures built below the low water mark are more likely to suffer flooding, more likely to cause damage to sensitive habitats, and for both of these reasons far less likely to get the required approvals from the province and the federal Department of Fisheries and Oceans. 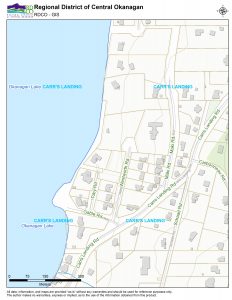 There are a number of residences with easy access to the park, who one imagines would enjoy this particular access to the lake.  While selling this land would provide the District of Lake Country with funds that could be applied to other worthwhile projects, such as paying some of the costs of acquiring land for the rail trail (see letter from the district in the Vernon Morning Star, Oct 11, 2017) , it will leave residents who live in the area but do not own waterfront land worse off.  The district has made a commitment to sell surplus lands within the district to pay for the cost of acquiring the rail trail lands.  Given that there do not seem to be enough such surplus lands to sell without including this piece of land, is sticking with this commitment and selling this piece of land truly in the best interest of the people of Lake Country? 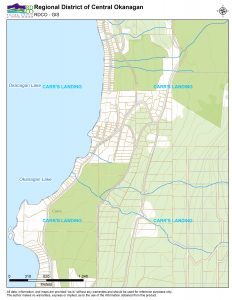 Gable Beach Park provides a strip of continuous public waterfront along a part of the lake shore where for a considerable distance to the north and south there are no similarly sized public lake shore lands.  To the east of this piece of land are approximately 100 parcels of land that do not have lakefront, are not within the Agricultural Land Reserve, and are well connected by public roads.  Many of these lots are large.  In future, with appropriate development of local services, one might expect subdivision and development of these lands, with far more people than presently live here being able to enjoy Gable Beach Park.

The District of Lake Country counsel is of course tasked with making the best decision for the people of Lake Country.  Selling this land will provides cash in hand, and allows council to follow through on a commitment that was made.  Some people may be disappointed at the loss of this public lakefront, but none can claim that the district broke a commitment that resulted in a tax increase.

Not selling this piece of land may mean that counsel is unable to fund its share of the rail trail without raising taxes.  If the value of the services provided to the public from publicly owned lands exceeds the value that could be realized by selling those lands, then selling them is a bad decision.  It is a better investment to raise taxes and keep the lands.  However, the value of these services may not be something that shows up on the district’s financial statements in the way that the sale of the lands does.  This of course makes it hard to see the value, and hard to argue against the sale.  However, these services are real and they do have value.  They include:

With plenty of assumptions, we can put a bit of math to this case.  Start by rounding the sale price to $1,000,000.  The Municipal Finance Authority of BC lists rates below 3% that communities may have access to, meaning that financing a loan for $1,000,000, rather than selling the land, would cost less than $30,000 per year.  So, if the owners of those 100 parcels in the area without lake access are, all else equal, willing to pay on average $300 per year per parcel, to keep the land in question in public hands, then it is worth doing so.

Maybe all else isn’t equal.  Maybe these property owners have already paid part of what they value this lake access at in the value of the property they purchased.  The District of Lake Country has a residential property tax rate of about $2.50 per $1,000 (see bylaws).  Based strictly on property tax revenues, if the net change in the total property values for the district, most of which would be in the area near Gable Beach Park, is a loss of more than $12,000,000, then keeping the north part of the park in public hands will on balance not cost the district anything.  This is because the loss in property tax revenue on account of the lower property values larger than the $30,000 annual cost of financing $1,000,000 put towards the rail trail.  With assessed values in the area commonly being above $600,000, the value decrease of the 100 parcels would have to be about 20%.  Economic studies looking at situations like this have seldom found values greater than 5%, and these higher values are for those homes closest to the park or trail being studied.  Therefore, based on property value changes and resultant property tax impacts alone, keeping this strip of land in public hands is unlikely to pay for itself in terms of revenues to the district.  However, there is likely to be some decrease in property values, so that the net benefit of selling that piece of Gable Beach Park is less than the cash received.  If the net change in property value is a loss of about 1.7%, well within the range of those economic studies, then for the people of Lake Country as a whole the sale generates no net benefit.  It just looks like a loss on the district books (thanks Terence for your email).

The District of Lake Country levies development cost charges on subdivisions.  For properties in the Gable Beach Park area, these charges are presently about $14,000 per single family residence (see bylaws).  What will be the impact of selling the north part of the park on development in the area?  It probably won’t stop it, but it may delay it.  For each year delay in the subdivision and development, Lake Country looses more than $400 in interest that could be earned (3%) on the development cost charges, and $1,500 in property tax revenue (if the subdivided parcel ends up worth $600,000).  So, slowing the rate of development in the area has a negative impact on district revenues, as well as delaying the profit realized by property owners in the area, and the wages to construction workers, revenues to materials providers, etc.  This is one more way that the net benefit of selling is less than the cash received.

Counselors for the District of Lake Country have a difficult choice.  Selling the north part of Gable Beach Park provides more than a million dollars cash in hand.  However, this is likely offset somewhat by a slower rate of property value growth and development in the area, and consequently lower property tax revenues and development cost charges for the district.  Further, selling the land reduces the well being of current and future residents in the area who do not own waterfront property, and takes away some profit potential from land owners in the area planning to eventually subdivide and develop their land, as well as Lake Country residents and businesses that benefit from development.  The cash in hand is a known amount and lets counsel stick to a commitment they made.  Selling the land does have costs that should be considered, but how large these costs are is unknown, and therefore defending keeping the land in public hands will be harder to do.

I do not envy the counsel members.