Symposium: Public Engagement and the Politics of Evidence in an Age of Neoliberalism and Audit Culture #highered #criticaled #caut #aaup

Posted on December 2, 2014 by Stephen Petrina | Leave a comment

Faculty of Education, University of Regina

This symposium will examine accelerating trends in higher education: neoliberalism, the politics of evidence, and the audit culture. In an age in which value is often equated with accountancy, we will examine the place in the academy for public intellectualism, community-engagement, Indigenous epistemologies, and how the impact of our scholarship is, and ought to be, justly assessed. Invited presenters will provoke lively discussion, but going beyond discussion, and blurring the lines between presenter and audience member, participants will be invited to engage actively with other presenter/participants in attendance for the purpose of effecting changes at their home institutions. Opportunities will be available for reconsidering and strategizing academic issues such as faculty criteria documents, measurement rankings, traditional impact factors, and other academic matters affected by the politics of austerity, neoliberalism, and new management technologies. Action will also be encouraged through submissions to a special issue of in education (the University of Regina Faculty of Education’s journal), potentially collaborating on an edited book, TED-style dissemination videos, producing a list of recommendations, developing examples of inclusive faculty criteria documents, possibly developing a community impact factor as an alternative to journal impact factor metrics, and further actions as collectively discussed at the symposium.

Questions to be explored include:

Posted on February 13, 2014 by Stephen Petrina | Leave a comment Angela Sterritt, CBC News, February 12, 2014– A “blue dot” movement has taken the Twittersphere and Facebook by storm. Photographs of Indigenous people with a blue dot on their chest are being posted on social media.

The proposed legislation was announced in the Kainai First Nation on the Blood Tribe Reserve in Alberta. Prime Minister Stephen Harper, Assembly of First Nations National Chief Shawn Atleo and Aboriginal Affairs Minister Bernard Valcourt held a ceremony in the community to “seal the deal.” 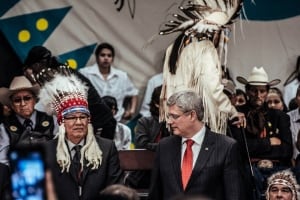