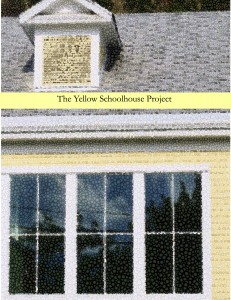 The Yellow Schoolhouse Project was intended to help us experiment with how art can explore questions of preservation, growth and connection.

The Yellow Schoolhouse Project had two main facets: workshops and a gallery show with interactive projects.

From July 2013 to March 2014, local artists led workshops.  A group of writers, led by Judy Wyper, created text and poems which were then passed on to a group of painters, led by Deborah Livingston who painted responses to these texts which the painters chose because the work spoke to them.  Artist Debbie Elliott meanwhile collected a series of soundscape recordings with various community members and then matched these recordings to the texts and paintings.  In the summer of 2014, these clusters of word/image/ sound were displayed at the newly opened Yellow Schoolhouse gallery.

The Gallery Exhibition also included interactive projects for the general public.  In the gallery space, visitors found a series of postcards with prompts to fill in.  They could take the cards home or post for others to read.  Seed packets also provided cues for projects that revolved around growth and imaging the future.