My post last week described a recent study of how information-sharing among South African government agencies succeeded to improve taxpayer registration. Such information-sharing involves minimal costs, and when, as in the South African case, no additional action on the part of taxpayers is required, mechanically raises the level of taxpayer registration. This technique for bringing more firms into the “tax net” is well-known and adopted in many countries. Indeed, one might ask why the technique is not used more often. Another interesting—and related—question is whether picking such low-hanging fruits actually gains anything for the government. If it does not (the South African registration success did not raise any significant revenue, at least as far as the corporate income tax is concerned), we have a potential explanation for its non-adoption.

I also reported that even in the late 1990s, when China was still a low (or lower-middle) income country, Chinese tax agencies sought out information from local Industry and Commerce Bureaus (ICBs) about firms that need to be registered for tax purposes. Consequently, in 2000, 97% of the firms newly registered with ICBs also got registered by tax agencies. In fact, the two government agencies that all Chinese businesses had to cope with from the beginning of their operations were tax agencies and ICBs. Since the main task of ICBs was business registration, whereas tax bureaus also engaged in tax collection, it makes sense that the ICB had an advantage in registration, and tax agencies benefitted from information shared by ICBs (and not so much the other way around).

But information sharing is only secondary: some government agency must possess the information in the first place. In China, both tax bureaus and ICBs engaged in ceaseless enforcement. As a result, although “operating without a business license” (无照经营) was a phenomenon widely talked about in the 1980s and early 1990s, it is rarely mentioned nowadays. (Economists seem to be late in coming to recognize that enforcement makes the biggest difference to business registration in developing countries: such conclusion is perfectly consistent with the Chinese experience.)

But it turns out that taxpayer registration is not the only thing that can dramatically improve because of strong enforcement. In an illustrative table from the China Tax Inspection Yearbook that I excerpted in part in the last post, the government also reports the rates at which Chinese taxpayers filed tax returns, relative to the number of taxpayers required by law to file such returns. The table excerpted below is a continuation of the same table I displayed in the last post.  It shows that the average rate of timely return filing was an incredible 95.75% (96.6% for legal entities and 95.4% for sole proprietors) in 2000. This reflect the underlying statistic that out of over 50 million (!) taxpayers required to file tax returns, over 48 million did so. 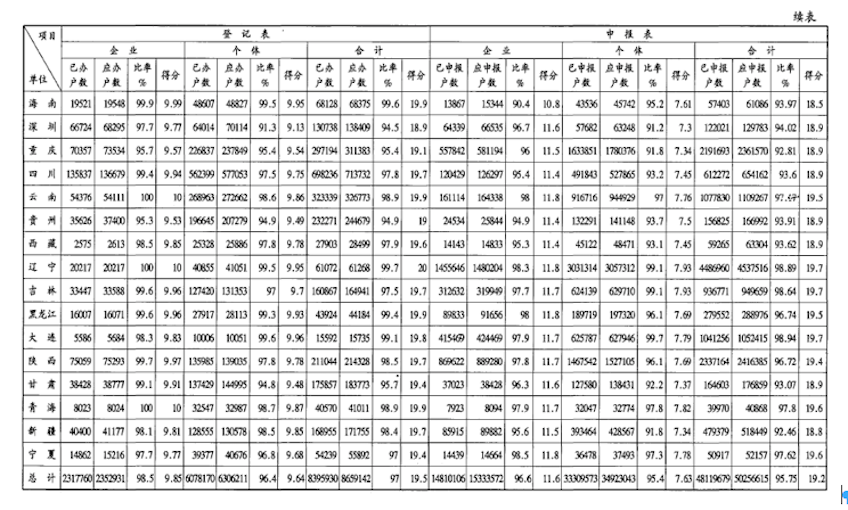 Some readers may feel skeptical about these numbers. In the South African study, the estimated rate of return filing for taxpayers subjected to “forced registration” was less than 10%, and the average rate of return filing among registered taxpayers was less than 30%. Even in Canada, the rate of timely filing of corporate income tax returns was only 86-87% between 2002 and 2007. Can we really trust these Chinese statistics? (A similar question is certainly being raised about the reported number of COVID cases in China these days, although some rigorous studies already address such skepticism.)

A paper published last year in the American Economic Journal: Economic Policy is relevant to answering this question about the credibility of Chinese return filing statistics. In the paper, Anne Brockmeyer at the World Bank and her co-authors studied the effectiveness of the Costa Rica tax authority’s efforts to improve the rate of return filing by sending email reminders to taxpayers. The study is based on a careful randomized controlled trial and contains many interesting details, but since it has already been summarized in several places (see this and this blog), I will only comment on three aspects of it that are relevant for understanding the Chinese case.

First, Brockmeyer et al 2019 finds a rough correlation between GDP per capita and the rate of return filing. Costa Rica’s GDP per capita is actually a bit higher than both China’s and South Africa’s, but its rates of return filing (for income and sales taxes)—at over 80%— are much higher than South Africa’s and closer to China’s. Among initial non-filers, the email reminders from the Costa Rican tax authority increased the ultimate filing rate to over 30%. So, suppose that all non-filers receive email reminders: the Costa Rican tax filing rate could then become as high as 86%—similar to Canada’s. In other words, starting from an already high level of  voluntary return-filing, simple email remainders substantially increased the rate of filing even further.

This suggests that we are again looking at an instance of low-hanging fruits: it may not be that hard to increase the return filing rate, if tax authorities made the effort. To me, this also gives the Chinese statistics some credibility. As can be seen in the table excerpted above, Chinese provincial tax agencies are actually evaluated according to the return-filing metric, so it would not be surprising that much effort went into raising performance along this dimension.

Second, while email reminders sound very civilized (and proved effective), the Costa Rican tax authority as depicted by Brockmeyer et al 2019 comes across as toughies, and indeed rather heavy-handed. For example, the tax authority subjected a significant share of the taxpayers that did not file returns (including those that did not respond to email reminders) to “follow-up activities:” cases were assigned to individual tax officers for phone calls, audits, enforcement procedure, and even temporary closures. Clearly, greater-than-80% return-filing was not good enough for the government. As another example, to prevent deregistration of active firms, all non-filers that request deregistration have to be visited by a tax official.

Moreover, the “list of taxpayers in arrears is usually published online.” Overall, 9 percent of taxpayers in Costa Rica report having been subject to some kind of “control activity” by the tax authority during a 1-year period. All this comes on top of the fact that state institutions and credit card companies are required to withhold 2-6% from transactional amounts as “advance payments of tax”—whether or not there is any true tax liability. Costa Rican taxpayers are also required to engage in much more third-party information reporting than their counterparts in developed countries. All this raises the question: what is really doing the work here, the kid glove of email reminders or the iron fist behind it?

I find this interesting because in my research on Chinese taxation (which I present in a book to be published by Cambridge University Press), I find Chinese tax administrators also working seemingly much harder at tax collection than I believe the IRS in the US and CRA in Canada do. “Control activity,” a term that I have not previously seen before reading Brockmeyer et al 2019, is a pretty apt term for describing the mentality of Chinese tax administration.

This brings me to the third aspect of the Costa Rican study that struck me as remarkable. According to the authors, the tax-to-GDP ratio in Costa Rica is only 13.3% (in 2016). By contrast, Lediga et al 2020 reports that the South African tax-to-GDP ratio was 29% (in 2015). Which country has the greater state capacity, the one with a 25% rate of timely return filing and 29% gross tax ratio, or the one with an 80% rate of timely return filing but 13% gross tax ratio? Neither study considers this question. But it seems to me to be a really good question for researchers on tax and development to ponder.