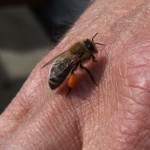 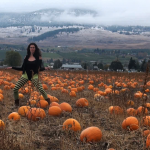 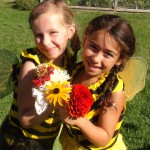 I ride my bicycle through orchards on my way to work every day and throughout the year I see the clouds of blossoms give way to the weight of fruit.  During my commute, I began to wonder about bees. I realized that I relied on bees for my food supply, but that I knew very little about them beyond two opposing impressions.  On the one hand I associated bees with all kinds of children’s clothing and toys and even dressed my daughter up in a bee costume for Halloween when she was three months old.  On the other hand I saw documentaries depicting bees as industrial slaves contained within stackable square white boxes and transported thousands of miles year-round to pollinate mono-crops throughout North America.  I decided to attend a local bee-keeping workshop to flesh out my understanding of honeybees.  The complex and dramatic world of bees opened up to me.   I marveled at the mystery and the order of their existence and at the thousands of years we have been living symbiotically with this insect.  I decided to make a film that was a poetic ode to the honeybee- a film more about wonder than about information.  Colony collapse disorder is a serious threat to the honeybee, but my intention with this particular work was not to provide ecological information, but rather to “stop the audience in its tracks and engender what James Joyce labeled aesthetic arrest” (Bogart, 63).

The short digital film Bee Line takes a loving look at this busy pollinator as an important entity within the miraculously–interdependent world we live in.  Women and girls (worker bees are only female) of all ages were invited to learn about the process by which bees dance “maps” to locate nectar, pollen, water and tree resin.  They were given a description of the round dance, the c-shape dance, and the waggle dance of the honeybee.  They were then invited to embody or represent the bee dance in a performance of some kind.  Those that responded to the invitation also chose their location and their costume.  I, as the filmmaker, simply recorded the performance.  The community engagement during the creation of the film was as much the product of the work as the resulting film itself.  It was an invitation to return to our ancient practice of mimesis.  Another group of women were invited to perform a poem and two graduate students worked on sound design and animation for the film. In all, twenty-four women participated in its making.  Shot entirely in the Okanagan Valley (known for its fruit and wine production), this film combined quirky dances, bee and bee-keeping images, sounds, and texts with disturbing facts about their demise, all set within a banquet of luscious agricultural landscapes.

This project was funded through the Eco Art Incubator (SSHRC), the Faculty of Creative and Critical Studies, Media Centre, UBC O.