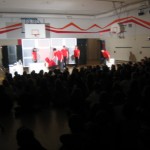 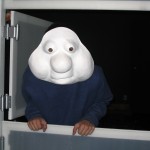 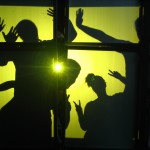 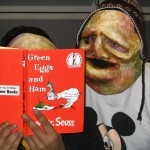 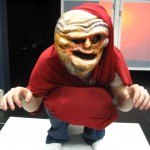 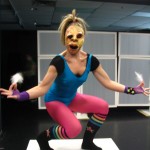 This course incorporated the research and exploration of diverse sources in the creation of new performance work.  For this class sources included poetry, colour, and character mask as their inspirational sources.

The course is designed to develop perception and to explore a wide variety of sources for the actor to use for rehearsal and for devising new material.  The work is based on the understanding that every aspect of our physical and emotional world can be represented in the human body.  Students develop physical, vocal, emotional and intellectual tools for the creation of new work using a variety of inspirational sources.

Live performance is an interactive art form.  The actual act of performance relies on the community to exist.  One of the most difficult skills to teach a performer is how to engage in a meaningful way with the audience.  Performing for children is one way of nurturing this skill.  Children respond immediately to what they experience and have no compulsion to protect the performer.  Consequently, the performer’s success or failure can be felt immediately.

The THTR 201 (2009) class culminated in a tour to three elementary schools and the public library.  A Teacher’s Resource Package was provided to educators prior to the performance. Students were to:

“Theatre players and directors are placed with interesting challenges now. ‘Canada’s multiculturalism policy has resulted in the highest rate of immigration in the world and has added complexity to the ongoing debate over national identity’ (Hill, 74), so now more than ever we have to focus on the inclusion of different roots to retain the attention of a wide variety of audiences. Thankfully for our audience, children may not have deeply thought of their roots or have pondered on the level that Hill brings up in her piece, however to retain some sensitivity in future works and in a players movements and thoughts is important to allow for every audience member’s enjoyment.”

“Having white privilege makes us numb to those thoughts – I just automatically assume Canadian children would understand what painting a portrait is, what a conductor is, when in fact that may be quite a hard task. Because children in most settings do not choose to attend plays and concerts at schools (where TYA is commonly performed), it is important to leave a good impression with sensitivity to their different roots. The coloured masks however in our play did give a little less of a white standpoint to the audience, and left a space for interpretation for the audience where colour could have literally been anything.”

“Immediately, I was excited about the magnitude of this opportunity for universities across the world to reach multitudes of young audiences through children’s theatre courses and actually practice cultural claims of “inherent, ineffable value for the arts” (Bannerman 59). On the other hand, on a larger scale how would providing free performances for children and schools through more TYA courses in universities across the world effect theatre companies?”

“Certainly, the diversity of the university students enrolled in Theatre 201 reflects the multiplicity of the student audiences for which we performed. In this way, we were able to use our diverse experiences, interests, and interpretations to compile a relational text. In fact, this became grounds for greater interaction in the question and answer discussion following each performance. Several students proudly identified themselves with their language and culture as a result. Of course, in relation to our presentation of colour, particular western assumptions and interpretations may have been emphasized. However, I felt that to a certain degree, through the use of different languages and mask, we transcended cultural barriers and inspired a deeper connection with the audience.

“Finally, what was the impact of the performance for audiences and performers? As for myself, I was both delighted and surprised by the interactivity between the actors and audience. The children’s excitement and laughter throughout the play fuelled and inspired the performance, and, hopefully, the show engaged the children’s sense of play and creativity. As well, I found performing for a young audience an honourable experience and deeply rewarding knowing that we had this rare opportunity to engage and stimulate young minds and perhaps light a spark of enthusiasm for theatre and the arts.”

“The expansion of non-Judeo-Christian playwrights and plays has had a profound effect on the diverse youth audiences.  Epistemology may not seem important but cultural teachings vary, and the opportunity arises for immigrant children to understand messages through not only their own cultures, but also through the ways their parents might instruct them at home.  Integration through non-conformism is essential to Canada’s multicultural dynamic.  However, it is not only the performance that has the chance to make this difference, but the variety of actors and the language in which it is presented.  Caribbean youth (for example) are fascinated by Caribbean actors on stage – just like them, who show that goals are attainable for all individuals regardless of their race.  Multiracial representation is lacking in mainstream theatre, for any age.  A downfall here is also that it tends to be the larger metropolises that benefit from such theatre, it is often forgotten or ignored that smaller cities and towns also have multiracial communities.  In Orange You Glad I Didn’t Say Banana, I believe that many of these issues were addressed.  The use of various languages and the multiracial cast were the most obvious, but there were several other ways in which the issues were addressed.  The use of six colours may be interpreted as acceptance of all colours (skin colour).  Each mask had its own identity, we exemplified that each identity was equally important.  Though race was not really a factor here (unless the white and coloured masks were interpreted that way), all masks were varying ages, addressing ageism.  I believe that collectivity was displayed through our colours and tolerance was displayed through our mask work.  Personally, the sets that may have had the most impact on the audiences were the Little Red One (don’t judge a book by its cover), Book Sharing (sharing and tolerance), Music Sharing (accept different forms of music, etc), Lifting Feathers (anything is possible!), and the Finale (collectivity and merging of colours).”