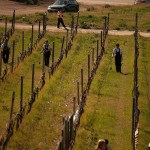 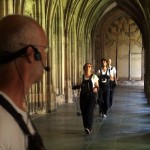 The Soundcan Project is an experiment using indoor and outdoor public spaces as performance venues for live art.  The intention is to interrupt habit and challenge traditional and sanctioned cultural exchanges.  In May and June of 2011, six public interventions in Europe were created, performed and recorded for a documentary film depicting public intervention practices and their goals and outcomes.  These included performances in Utrecht, Gent, Bielefeld and Berlin.  Soundcan technology combines a portable amplifier and a battery with an audio speaker inserted into an aluminum can.  The soundcan is connected to an amplifier by 5 metres of speaker cable; the amp and battery are attached to the performer.   Depending on the nature of the project, there are three sound sources used: a headset microphone, a cordless microphone receiver and an mp3 player.  We first performed Instant Artifacts at the opening reception at the Performance Studies International Conference in Utrecht.  We also performed a number of street interventions in Utrecht itself, the most successful happening in a courtyard (Neude Janskerkhof) beside St Martin’s Cathedral where we amplified Pergolesi’s Stabat Mater and circulated through the highly resonant space.  In Gent, Belgium we worked with Craig Weston from The Primitives and Koekoek, a street theatre group Weston created within the infrastructure of the social-cultural centre De Vieze Gasten.  We created and performed a number of interventions throughout the city of Gent, including Sheep/Wolf, The Beach, and Café Terrace.  In Bielefeld, Germany, we performed Moo, and The Beach on the street and we created site-specific installations in Theater Labor’s large theatre complex as part of their Junge Triebe festival.  In Berlin we performed in Gorlitzer Park where we were filmed by documentarian Volker Meyer-Dabisch as part of a documentary about this old East German railway terminus turned park.

A spectator of our Stabat Mater performance in Utrecht, Netherlands, said of the performance they were witnessing: