Posted on September 9, 2011 by Julian Dierkes | Leave a comment

Increasingly, the operators of small juku (塾長) seem to be offering themselves as education consultants to insecure parents. Whether this is also happening in the more corporate and chain jukus I don’t know.

What I mean by education consulting in this context is that operators of juku are stepping into roles that would have generally been taken on (whether in Japan or elsewhere) by parents or extended family. They are thus increasingly acting in loco parentis. Whether it is in instilling an appreciation for education itself in children or whether it is teaching manners, proper behaviour and generally socializing children, these are aspects of juku attendance of elementary school children that are increasingly highlighted by teachers and operators.

One area where the consulting function of juku is most obvious is in the selection of higher levels of education. With the introduction of school choice at the middle school level (throughout Tokyo and in many other parts of the country), parents of older elementary school students are increasingly facing such a plethora of choices that they are looking to professionals for help. This isn’t the kind of help that we sometimes read about for Manhattan where some high-priced consultant is meant to assist a child to get into a specific preschool or elementary school, but instead the jukucho are often looked to for providing advice on what school students might focus on in the first place.

There are some aspects of how parents are approaching school choice that seem to necessitate this kind of help. Geographical distance is not seen as an obvious criterion of selecting a school by many parents in metropolitan regions. At least it is not a criterion that trumps other criteria. This is in part due to the high reliance on public transport and the trust in students, even elementary students, to be able to rely on public transport for a commute to school that may stretch as long as 90 min. Another factor is that there seems to be less of a concern than I hear around me in Vancouver now or remember from my Berlin childhood, about enrolling siblings in the same school.

So, given the lack of constraint by geography or siblings’ prior choice, a Tokyo elementary school student could theoretically consider hundreds of schools as options. This is where discussions with the jukucho narrow the choices. Of course, practice entrance examinations already narrow the choices significantly in that the scores and ranking (偏差値) will have the student and her parents focus on a  narrow band of schools that fall near her hensachi score with perhaps one or two ambitious choices and a safety choice. Beyond this strictly numerical choice, however, jukucho offer their insights into specific aspects of schools. This goes much beyond the increasingly active attempts by schools to establish a profile for their offerings in an era of school choice, but includes such factors of the level of ambition of sports teams in a given school, the general atmosphere at the school (is this where cultural capital may be sneaking into decisions?), opportunities for student exchanges or common destinations for graduation trips, etc. 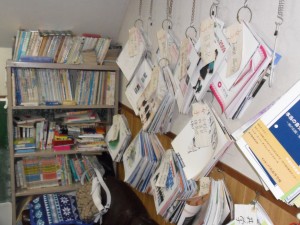 School Brochures at a Tokyo-Area Juku

Given the role of jukucho in dispensing such advice, many private schools are increasingly courting juku operators through various kinds of fairs. Some jukucho have also reported to me that they’re beginning to build on prior relationships with (predominantly private) schools that allow them not only to speak about some (somewhat local) schools with greater authority/inside knowledge, but potentially also to “get students into” these schools, even when their entrance examination result may have fallen slightly short of the result required.

Note that as far as I’m aware, none of these consulting services are for-fee. Instead they are offered as a service to long-attending students. But jukucho are clearly branching out from the “mere offering of courses” through such additional advice/consulting.

Posted in Relation with Schools, 塾長