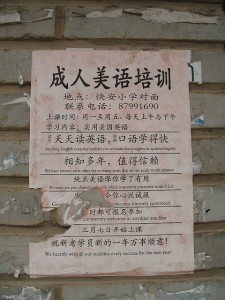 In today’s Globe & Mail, Tralee Pearce wrote an article that reports on efforts by Toronto parents to seek advice on school admission. This is a nice contrast to a Manhattan-focused article on Kumon in the NYT some weeks ago.

The first thing I noticed that even the most anxious Toronto parents are positively serene in their attitude compared to Manhattan parents. No big surprise there.

What’s more interesting in a general way and as a lens on Japanese supplementary education, is that the article discusses the status of past entrance exam takers in imparting wisdom on the entrance exam. This personal experience is something that is valued very highly in the juku world as well.

While not all juku-cho are graduates of the most prestigious universities (remember that this is a clear and nearly universally-agreed upon category in Japan), many of them are.

In part, this educational background is rooted in the fact that one of the trajectories that has led individuals to become supplementary education entrepreneurs is their role as tutors (家庭教師) during their university years. For some individuals, success in this role and requests from parents to also tutor younger siblings, for example, then led to the foundation of a juku.

In hiring tutors Japanese parents clearly seem to prefer students at prestigious universities, though I’m not sure whether there is any data to corroborate this suspicion. While it seems relatively unimportant to parents whether a tutor or juku instructor has any pedagogical qualifications (formal in the form of a teaching license, or informal in the sense of a talent), subject-specific knowledge, or rapport with students. Instead past experience and success in entrance exams seems to trump many of these other possible considerations.

There are a number of aspects of this preference that I find odd. On the one hand, it suggests a strong belief in the uniformity of learning styles. A students’ individual strengths and abilities are not considered when any past exam taker is seen as an expert independent of whether this student was largely self-motivated or needed a highly regimented study regime, for example.This belief in the uniformity of learners is closely linked to a strong belief in the efficacy of effort in educational success. Adages such as “four hours success – five hours failure” (referring to the hours of sleep during exam preparation, I’ll have to dig up the Japanese original for this some time) are indicative of this belief in effort rather than aptitude.

Given the curriculum as a basis, why is there specific advice for how to take the exam for school A vs. school B? The advice often focuses on a preference for a specific type of question (this is particularly true for university entrance exams where volumes of past exams are analyzed and available for practice tests), yet it would seem to me that at a certain level a student who is well-versed in the school curriculum (with some strategic extensions) ought to be well-prepared for entrance examinations at a large number of institutions. Yet, the strong belief in some kind of insider knowledge from having successful taken an exam persists.

The one area where I do see advice from past test-takers (though successful or not wouldn’t matter) as useful is on the format of the exam. This also holds for interviews and other non-exam-based forms of admission, of course. From my own experiences with the TOEFL, SAT, and GRE (granted, many years ago), I would agree that a degree of familiarity with the format of a test can be very useful in reducing anxiety and also improving results.