New Book on Supplementary Education Around the World

Out of the Shadows: The Global Intensification of Supplementary Education

“Private Tutoring in Vietnam: A Review of Current Issues and its Major Correlates”
Hai-Anh Dang (pp. 95 – 127)

“But did it Help you get to University? A Qualitative Study of Supplementary Education in Western Australia”
Martin Forsey (pp. 171 – 189)

Perhaps I’ve found a second job that is advertised with a focus on supplementary education, though I have the strong suspicion that Marburg University in Germany has something else in mind when they are looking for a professor who works on “extramural education of youth” (außerschulische Jugendbildung). I suspect that this has more to do with community centres that offer specific programs for youth or perhaps programs that focus on youths who are not attending school…

Where once a school was able to guarantee children an education good enough to succeed in society, many parents now see the future of their children at risk due. The fear that the school system is not changing quickly enough or at least not in the right direction to meet the challenges of the 21stcentury leads to more private agitation.

Naturally, demands for responses focus on schools’ accountability. To do so, reforms of the educational system are necessary and were implemented over the past few years – mainly as a result of the bad performance of German pupils in PISA 2000. In general, PISA has led to an unbelievable amount of research activities.

What is often forgotten is the fact that research focused not just on the assumed failures of schools is needed, but also about Nachhilfe, which was also the topic of a lot of discussions.

For some years the German media is now bringing up the problem of Nachhilfe but except a few regionally specific social scientific projects no national or even comparative study has been carried out.

In the end, not all the debates about concerns towards this kind of education were pointless.

Finally, in 2007 the government reacted and the BMBF, the German Federal Ministry for Education and Research, commissioned a report. Shortly after, the selected private research institution, the FiBS (Institute for Education and Socio-Economic Research and Consulting), came up with a survey of over 169 pages summing up all the available data about forms of commercial Nachhilfe, data records about offering institutions and an international overview about comparable data including Austria, England, Poland, Japan and South Korea.

The survey was titled with: “What do we know about Nachhilfe? – Status and Examination of Research Literature about Offering, Need and Effect” (in German).

All in all, the education experts of the FiBS stated, that the current state of research was “fragmentary” or rather “confusing” (p. 12) and so a lot of work has to be done until we can fully understand how we – in political as well as societal terms – have to deal with this educational reality.

Clearly we will have to observe other Nachhilfe-systems around the world to see what concepts seem promising to us for dealing with Shadow Education. Sadly not much was done after the FiBS report was published. While I myself am in the middle of a research project about Shadow Education in Germany and Japan, not much is done in German research institutes to see what is going on in Nachhilfe-institutions. Just one thing seems to be clear: Nachhilfe – or however you may entitle this kind of private tutoring – is expanding all over the globe. Last year FiBS started a survey about Nachhilfe in the G8-States and found out, that the need for supplementary education of this kind is growing steadily.

One reason for this – Nachhilfe institution operators themselves said so – are the school reforms mentioned above, e. g. the structural reform of the Gymnasium, where students don’t need to go to school for 13 years altogether (including 4 to 6 years of primary education) but just 12 years. Pressure in school has intensified and so more and more students (and parents) look for help – and they find it. If you follow FiBS, 58 % of institutional Nachhilfe offers stated that the request for their private after school lessons has steadily increased over the past few years.

I still hope for more research activity in this field of study and am happy, that the BMBF has already included a section about out-of-school learning in the national report on education as a result of the FiBS report. We do know that Nachhilfe exists and is expanding; we just have to understand how to deal with this fact in the present and the future as well.

Posted on September 14, 2011 by Julian Dierkes | Leave a comment

I’m branching out in my collection of juku flyers, this time to Berlin, Germany [thanks, Mom!]. 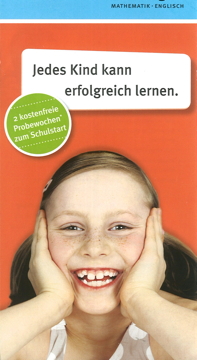 Cover of a German juku flyer

I suspect that some people will recognize the design of this flyer as it is advertising the local branch of the juku that is probably THE most active internationally. There is not much information on the front of the flyer, except for a generically happy-looking, perhaps stereotypically German looking girl. The back of the flyer does contain a little more information. From the information it is clear that this particular juku is targeting primarily remedial purposes. This seems to be (still) generally the case in Germany and in most of Northern and Western Europe.

“Lernfreude” and “Konzentrationsvermögen” look like they are right up there with “Fahrvergnügen” in the canon of compound German words that have a chance at English adoption. In this case, they are referring to a “joy to learn” and “ability to concentrate” respectively. Departing a bit from the generically remedial script the second bullet point promises not only a “focus on weaknesses in learning”, but also a “targeted expansion of strengths in learning”.

An emphasis on the emotional aspects of learning (weaknesses) is also in clear evidence with such terms as “joy”, “confidence”, “relaxed approach to challenges”. 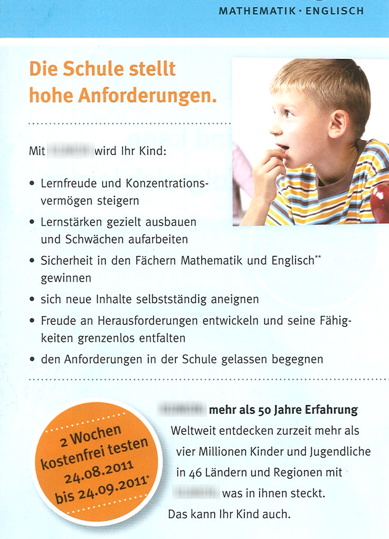 Back Side of a German juku flyer

Recurring Concerns about Tutoring in Germany

Yesterday I had a chance to meet Steve Entrich, a doctoral candidate at the Univ of Potsdam near Berlin. Steve is planning to write a dissertation that will compare aspects of shadow education in Japan and Germany.

Steve presented his plans for his dissertation. In the discussion, including discussions with his supervisor, Wolfgang Lauterbach, it was clear that research on supplementary education and tutoring in Germany is going through the same development that many of us are experiencing elsewhere, i.e. suffering from the fact that our research interest seems to fall between institutional cracks, particularly in Faculties or Schools of Education where supplementary education fits neither with K-12 education (focused exclusively on formal, state-recognized schools), nor with adult education (focused on, er, adults).

However, I also learned that Nachhilfe (remedial tutoring) does attract a fair bit of periodic attention in the German press where it is largely perceived as a growing “problem”. One of the main concerns is with equity and class-specific access to educational resources. A focus on the inequality that is – at least on the surface – inherent in for-profit, fee-based supplementary education, seems to be an important “hook” to motivate this kind of research in academic contexts with a strong focus on inequality (continental European sociology, Korea, etc.)

While Nachhilfe thus shows up periodically in the German press, there is no sustained attention to this issue, nor has it become a focus for any research projects.

The discussions in Potsdam reinforced my sense that there is a great need for more exchanges among researchers with an interest in supplementary education.

[Due to recent travel, I haven’t been posting as actively as in previous months]

However, in some countries, this rise is clearly beginning from a very small base. Most of Europe (save some Southern European exceptions, Portugal, Malta, Greece, but also Turkey) would be in this category where supplementary education largely exists in the form of individual private tutoring. While this sector has been corporatizing since the 1990s with some real corporate education giants emerging, and is becoming more and more visible in cityscapes and advertising, there is no large-scale take up.

Some of the growth has been if not fueled, at least hastened or reinforced by public policies. France is thus a longtime exception in that it offers tax credits for supplementary education expenses.

Germany now seems to be following in the footsteps of the U.S. by offering some public subsidies for remedial tutoring. Unlike in the U.S. where eligibility for such funds is rooted in the consistent under-performance of schools, the emerging German model ties the funding to the income/welfare status of students’ parents. The promise of available funds has thus come as a part of the package of welfare reforms commonly described as Hartz IV. A subsidy of €10 per month per child has been mentioned. A quick check of some websites of German tutoring services suggests that this may pay for a single instructional session once a week, if that session is part of a larger package.

However, these subsidies are currently not formally on offer but have to be specifically applied for. Uptake seems to be very limited.

The proposed subsidy is also unusual in that it would suggest (to my eye anyway) federal involvement in education, a big constitutional no-no in Germany, through the welfare back door.

If this subsidy were to become more common, it would be a step toward a public policy that addresses the equity concerns often associated with supplementary education. At the same time, the current discussions offer no insights on the selection of tutoring services where this subsidy could be spent, nor age or subject ranges that would be eligible.