Thanks to Jason for scoring me a ticket to the sold-out preview showing of RiP: A Remix Manifesto, the long-awaited release from Brett Gaylor, germinating and mutating for some time over at http://www.opensourcecinema.org/. It was a fun and stimulating night out.

For somebody familiar with the works of Lessig, Doctorow, Negativland, et al there isn’t a whole lot new in terms of argument. But as Gaylor noted in a post-screening Q&A session conducted over Skype, this is an issue that has only begun to gain traction as a legitimate social issue outside a narrow sliver of online fanatics. And in that sense, I hope this film is seen by millions: it’s smart, snappy, fun and compelling stuff… And a treat to have some consideration of Canadian concerns in the mix — kudos to the National Film Board, I consider this an exemplary use of my tax dollars (as is their nifty new online screening room). I fervently hope it makes its way to screenings in countless classrooms in the months ahead.

Other than the “I blinked and almost missed it” cameo by Alec Couros (I still think Dimitrious Karamalegos is courosa’s strongest performance), the movie is at its frenetic best framing the issues around the DJ Gregg Gillis, AKA Girl Talk. The live footage in the film is simply off-the-hook nuts. It’s almost impossibly wild to think that a geek with a laptop can stir this vibe up. (As an aside, I first came across Girl Talk via some blog posts from his bemused road manager — here and here — “staff acting like they didn’t know they were gonna have a show in a 1000 capacity venue where 900 people were going to try to get onstage.”) I can’t resist sharing some more footage from the most recent GT tour: 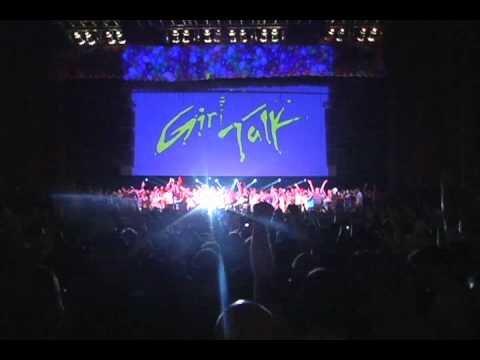 Remember, this is fundamentally, as the name of GT’s record label suggests, Illegal Art. A particularly stirring concert sequence in RiP is cut off prematurely because it would expose the filmmaker to considerable legal liability. (Lessig asks Gaylor at one point, “you don’t own a house, do you?”)… The film estimates that a typical GT track would cost $4.5 million to be legally cleared given the prevailing fees. One of the most affecting scenes in the film shows Gillis coming down in the desert after a triumphant show at Coachella, expressing his simple heartfelt desire to just keep things rolling, to keep making people happy, knowing that at any moment a police raid or a lawsuit could bring the party to an immediate halt.

Two other scenes with Gillis stand out for me. One is a sequence in which he takes a snippet from Elvis Costello’s “Radio, Radio”, and effortlessly bends and tweaks the song on his laptop into something that sounds nothing like the original but instead is unmistakably like Girl Talk. (Having an admitted computer-illiterate patent officer watching the process in a state of absolute wonder is an hilarious touch.) The other covers Gillis’ former day job as a biomedical engineer, in which he argues that broad and ungrounded patents are slowing research and undoubtedly costing lives. I realized watching the sequence how even when obsessing about the subject as I have in recent years it’s all too easy to lose sight of the moral urgency involved with opening up access to knowledge. This is no mere academic discussion, it really is a matter of survival.

There are also some fantastic scenes in Brazil. Before seeing the film, I was aware of the work of Gilberto Gil, and the national embrace of open source, the pioneering process of participatory budgeting, but watching kids in a classroom learning to scratch records and rap reinforced my desire to learn more about what’s going down there these days. As Lawrence Lessig has argued, it’s clear those of us in North America can learn a great deal by looking southward.

Which side of the ideas war are you on?

I am a Strategist and Discoordinator with UBC's Centre for Teaching, Learning and Technology. My main blogging space is Abject Learning, and I sporadically update a short bio with publications and presentations over there as well...
View all posts by Brian →
This entry was posted in Uncategorized and tagged copyright, free culture, music, Open Content, remix. Bookmark the permalink.