The Highs and Lows of Pottery: Weeks 2 and 3 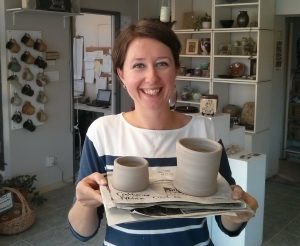 Walking out of last week’s class felt great! I had made two cylinders that I felt proud to present. I figured I had the hang of it. I had been very careful at every single step, and called over my instructor before proceeding a few times so I wouldn’t ruin the piece. When she was helping other students, I waited rather impatiently. In that very moment I was feeling frustrated I was also imagining what my students may feel sometimes. I just needed her attention for one minute only before I felt I could relatively confidently proceed without mangling the clay. I imagine this can be tough enough to manage in a class of 8 novice hobby potters with an hour to work with. For me, 600 students a term means just that one minute of attention per student equals an impossible 10h each week (and forget timing-as-needed). When it was my turn for her attention, she helped me verbally review the next step, and once she even pushed down on my hands so I could feel the force she meant. I don’t know how I would have learned that feeling on my own. The entire class period I focused on nothing else. The sun was shining, I could centre clay, and I made two cylinders! Hooray! Please, admire my work: 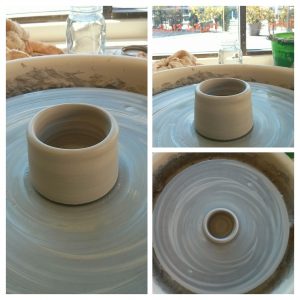 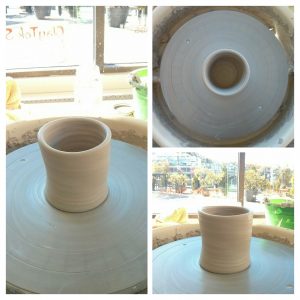 This morning I spent an hour clearing out my email inbox before class. I left home in a fluster, rushing the whole way and thinking about upcoming travel and the things I needed to do this afternoon. I arrived and quickly checked on my pieces from last week, all looked great, and I quickly prepared them for the next phase. I share this information not to simply recall my morning, but to highlight the state of mind I entered class. It seems to have been incompatible with pottery.

My goal was to create two more pieces today. I quickly failed. The first piece centred* surprisingly easily (and I know it was decently centred because of later disaster), so I went for it. I was the first person to start making my cylinder. Everything was going great for about 2 minutes, until the entire piece of clay had come off in my left hand, leaving only the disc of a base spinning on the wheel. Apparently I had made the wall too thin right there. I chuckled as it dawned on me that it was fully destroyed. Then I was furious. I had to start over from scratch. I would not make two pieces. I might not even make one. Scrape off the clay blob, clean the wheel, knead a new piece of clay, and start centering all over again. Ok. Except it wouldn’t centre! I tried and tried and got more and more frustrated and it got more and more wobbly! After almost half an hour of trying I almost gave up. Instead, enter teacher. I looked up and there she was. I asked for help and she was there. (Again, just the right moment. How can I ever do that?) She made a suggestion and reminded me it was ok—it’s only clay. I was a breath away from quitting. Instead, I kept going. The resulting pot looks like crap. The walls are so thin that when I went to take it off the wheel I almost crushed it into another grey blob. I finished it. This is my ugly, misshapen masterpiece. I title it: Persistence. 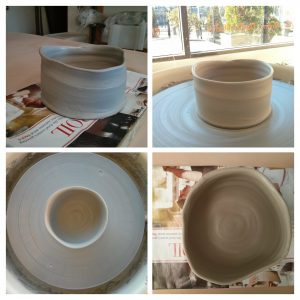 “Persistence.” Upper right and bottom left are still on the wheel. Opposite corners: what I salvaged post-removal.

* The second step to pottery on the wheel—after sort of kneading it to get air bubbles out—is to get it “centred” which means that as it spins around it’s actually in the centre of the wheel and it doesn’t wobble. If it wobbles, it could spin off or have a bubble in it or otherwise not be sturdy in later phases. Centering can be a time consuming endeavor involving lots of bringing the clay up to a cone shape, then squishing it back down to an anthill. If you rush it, you will probably pay a price later in a weird or collapsed or cracked piece. Patience!