Posted on November 7, 2018 | Comments Off on Conference Follow-Up Questions on Peer Assessment

Someone who attended my conference presentation last month about Peer Assessment (see the blog entry here for slides), sent me some follow-up questions that I thought might be useful to capture here. Thanks for your questions! My responses are signaled by >>.

* How do you train students in the use of a rubric and in effective peer review, particularly in such a large class?

>> we developed the Peer Assessment Training workshop, which can be adapted for anyone to use https://peerassessment.arts.ubc.ca/ . If you have access to Canvas there’s a template and a demo in the Commons. If you don’t, stay tuned to our peerassessment website… we’re working on a fully open WordPress version for launch soon.

* How do your students respond to being graded by novice peers like themselves, rather than a more expert instructor or TA?  Does it take some convincing, or do you just present the evidence of the effectiveness of peer assessment and move on?

>> there is a range of opinions… but there’s a range of opinions about every pedagogical decision! I show them the evidence, make sure the assessment isn’t valued too highly, and give people a form to submit to have their grade re-evaluated by me if they want. That takes care of most concerns.

* You mentioned Peter Graf also assesses the quality of the peer assessments as well; do you know how he handles this?  (For instance, does the student being evaluated also reciprocally evaluate their peer reviewer?  Or is it something the TA does?)

>> He and his TAs grade the comments. It moves pretty quickly when they’re exported in a spreadsheet.

* In your slides, you mention two additional challenges: Students don’t trust each other, and comments were poor quality.  How did you address those challenges?  Any recommendations/ideas for how you would do it in the future?

>> The strategies above generally address these concerns.

>> If you’d like to try it out but are nervous about scale, you could always treat it as an opt-in pilot, so a sub-group of students try it out and give feedback. In a class of 440 I’m sure you can find at least a dozen students willing to participate… that’s one nice thing about very large classes!

Comments Off on Conference Follow-Up Questions on Peer Assessment

Posted in from professional development activities, from the classroom

If these terms mean anything to you, you might be interested in checking out my short report, where I pit peerScholar and Canvas Peer Review tool head-to-head. Yes, it’s absolutely like Batman V Superman: really we’re all actually friends just trying to  reach a common goal (i.e., facilitate student peer review).* Extra extra thanks to the students who participated and gave feedback, making this report possible.

Finding a Tool to Facilitate Peer Review in Large Classes 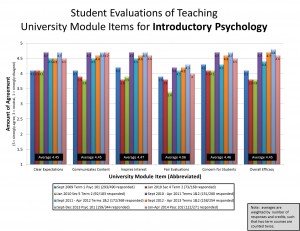 While flying to the APS convention in Washington DC today, I was perusing a back-issue of the journal Teaching of Psychology. I came across an interesting article that made me consider a new paper-writing option for my intro psych class. In two studies, the researchers asked intro psych students to upload 16 brief (1-2 paragraph) statements that expanded on one concept from a 10-concept shortlist from each chapter. The paragraphs were graded for completion only (just a check to make sure they were topical), and were then coded for topic choice. Students responded better to midterm exam questions on topics they had previously written about than to questions on topics they had not previously written about–even when students had been told specifically which concepts to write about (Study 2).

What I’m finding particularly intriguing about this study is that (a) students seemed to learn the concepts better after writing about them, (b) the task seems pretty simple and straightforward for students (“What I learned about the concept is…” or “An example of the concept in my life is…”), (c) it may promote strong study habits that can be transferred to other topics and courses, and (d) because it’s ungraded and tracked online, it seems logistically manageable in a very large class.

Indeed, my classes are pretty large (depending on the year/term, they range from 250 to 400 students). Couple that with very limited TA resources, and fitting in writing is always a challenge. Currently I assign one 600-word application-style paper in each term. Recently I added a peer feedback step using peerScholar software, and that worked out pretty well. Informally, students reported learning from reading others’ papers, yet few seemed to revise their work at all, let alone implementing changes based on others’ feedback.

Maybe the assignment in this study could be a worthwhile pursuit. In this research paper, the authors noted that completion of all 16 was worth 10% of the students’ grade. I’m not sure I could offer that just for completion… we have pretty strict grading standards here in UBC Psych. But once I cut it in half (separating term 1 101 from  term 2 102) that’s only 5%… that seems more manageable.

I continue to ponder… as I lie awake… on Pacific time… in Eastern timezone.

Comments Off on “Writing-to-Learn” in Intro Psych