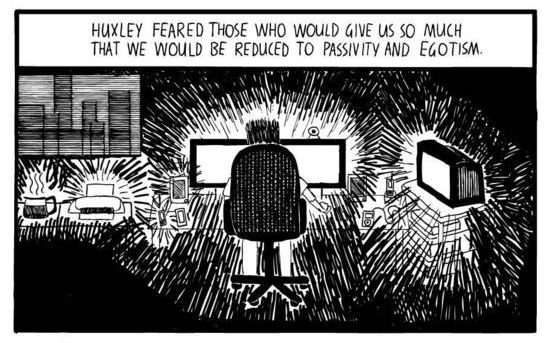 In the new 30-million-iPhones-strong Apple universe, OS X is old school. It’s a relatively open system, onto which I can install any program, get to any content, and even change how it works. I’m not obligated to go through Apple. That’s why instead of bringing the Mac OS down to its new devices, Apple is bringing the closed iPhone system up. — Douglas Rushkoff

Okay, there’s one thing–and only one–I find interesting about the iPad so far: that it shifts back to “read only” from the read write web. — Jay Rosen

I was honestly surprised there wasn’t a push to release some of the creation tools in the iLife suite along with the device — it seems perfect for editing pictures (iPhoto), creating podcasts/music (GarageBand), or editing video (iMovie) … I’d add iWeb, but that whole thing is such a pile of steaming … never mind. I know there are apps that do these things, but this device seems to scream “use me to make digital stuff and push it out into the World!” I just think that is a missed perspective at Apple — they are a consumer company bent on selling digital representations of the stuff lots of people consume — TV, Movies, Music, and now Books. — Cole Camplese

…the reason that mobile learning is consistently overhyped, despite its obvious defects, is that implicit in the image of a student watching a lecture on his phone in a bus is the idea of higher education as a distributor of content, rather than as a community hub. It’s a way of going forward technically while doubling down on the old paradigm.

That is to say, the problems that Schank and Downes have articulated around it are precisely why it is attractive. A world without keyboards is a world where the old paradigm can survive. — Mike Caulfield

What we are seeing right now is “the return of the corporate-driven-platform-based computing” that is essentially killing the web, and endangering the open URL. And we all love it or hate it for what seems like all the wrong reasons: the device. Not the under girding ideas of openness, freedom, and affordability. — The Bava

Apple’s iPad was announced today, and yes, I want one. — Stephen Downes

Lest that last quote look like a cheap-shot, I’ll remind you that I am hardly immune to gadget-lust. And any reader of OLDaily knows that Stephen is hardly uncritical on this subject.

I can’t help but fear that the open web wave has crested, and what we are enjoying so much right now is the retrenchment of proprietary platforms and the internet configured as a virtual shopping centre.

15 Responses to They said it…