Renamed: Plate Tectonics: Reshaping the Ground Below Us – ID 19738

WISE is theoretically based on the Scaffolded Knowledge Integration network (SKI) which includes the following four tenets: 1) accessibility to science, 2) making knowledge visible, 3) learning from others and 4) promoting autonomy (Linn, Clark, & Slotta, 2003). In piecing together a unit study for middle school students (grade 6-8), incorporating these four tenets of SKI into the non-technology based areas of learning is intentional to enhance visibility of knowledge and opportunities for peer review and critique. The WISE Plate Tectonic project is being used as a final assignment within a geology unit based on the structure of the earth, the surface of the earth, plate tectonics, and earthquakes and volcanoes. A few authorship changes have been made to the Plate Tectonic project mainly to include a Canadian perspective. These changes include the addition of Canadian map images showing placement of volcanoes, earthquakes and mountain ranges, along with appropriate text. As well, small alterations have occurred in the subtitles of the lesson outline.

The geology unit includes three resources, two non-technology based texts and one project from WISE. The two non-technology based resources that have been chosen are faith-based resources as the school that I work for is an independent religious school. The Geology Book by Dr. John D. Morris is a textbook, but includes detailed and colourful diagrams illustrating the inside of the earth and side views of how the earth’s surface is formed. A Child’s Geography: Volume 1 by Ann Voskamp includes conversational style writing, hands-on activities, real world extensions and a living book list of extension readings. Talking about thinking is incorporated into both of these resources through oral narrations, discussions and the sharing of written work for peer critique. Learning is made visible through notebooking and hands-on model making.The table below illustrates the order of the unit with how resources will be completed in conjunction with each other. 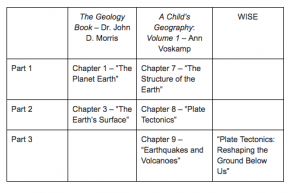 In designing this unit, the four tenets of SKI are intentionally incorporated in addition to, or through the use of each resource. These four tenets provide a framework for students to work through an inquiry process as described in Inquiry and the National Educational Standards with students thinking “about what we know, why we know, and how we have come to know” (Center for Science, Mathematics, and Engineering Education, 2000, p.6). Linn, Clark and Slotta (2013) more specifically define inquiry “as engaging students in the intentional process of diagnosing problems, critiquing experiments, distinguishing alternatives, planning investigations, revising views, researching conjectures, searching for information, constructing models, debating with peers, communicating to diverse audiences, and forming coherent arguments” (p.518). The following table analyses each of the three resources and aligns them with the four tenets of SKI as well as the inquiry processes described by Linn, Clark and Slotta in the above definition.