In the video A Private Universe, Heather articulates personal theories regarding several natural phenomena. Heather has developed many misconceptions that she uses to explain the world around her. Her teacher is surprised when she expresses detailed an understanding not connected with content and explanations introduced in class.  Osborne and Wittrock (1983) write that “children develop ideas about their world, develop meanings for words used in science [mathematics and programming], and develop strategies to obtain explanations for how and why things behave as they do” (p. 491). Heather has many private theories and through verbal explanation and drawing, Heather becomes aware of her prior knowledge. She did seem somewhat unsure and dissatisfied with her explanations. Heather was able to reverse her misconceptions through new experiences in the classroom.  Posner writes that “a new conception is unlikely to displace on old one, unless the old one encounters difficulties, and a new intelligible and initially plausible conception is available that resolves these difficulties.” (p. 219). She confronts her private theory and is able to accommodate a new understanding. In A Review of the Research on Student Conceptions in Mathematics, Science, and Programming (1990) Confrey writes “teachers are often, and understandably, impatient for their students to develop clear and adequate ideas. But putting ideas in relation to each other is not a simple job. It is confusing; and that confusion does take time. All of us need time for our confusion if we are to build the breadth and depth that give significance to our knowledge” (p.  9). This demonstrates the importance of activating prior knowledge and engaging in activities that might cause conflict within the learner.

During the video and the articles, I was connecting to the program First Steps in Math which has helped me identify many mathematical misconceptions students hold. It is all about identifying student’s misconceptions about math and having them explain and confront their thinking. When I took the PD several years ago they highlighted examples of several children using personal theories to solve math problems. Most of the teachers at the PD initially assumed the students were randomly attempting solutions. However, through the case studies, it was demonstrated that the kids had developed, although very misguided, ideas and procedures they were applying very purposefully. In one place value assessment from the program, kids have to identify the number of dinosaurs in the picture below. When they determine that there are 35 dinosaurs, they are asked to underline the 35 (without the teacher identifying the number). They are then asked to circle that many dinosaurs. The majority of the teachers said most of their kids circled 3 instead of 30 dinosaurs. It then recommends a series of activities that help address student’s misconceptions about the number system. 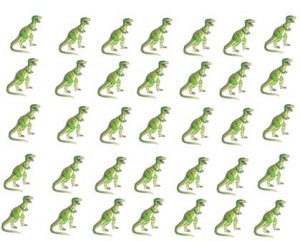 I think technology can be very useful to help kids address conceptions. I now usually start new math and science concepts with a chance for students to explain and demonstrate their prior knowledge and personal theories on the subject. When studying the human body my students used Explain Everything to collaboratively create videos about what they thought happened to food after they ate it. It is very interesting to hear their ideas and attempts to explain their thinking. Many came out of the project with a pretty accurate understanding before we even “started”, just through collaboration with knowledgeable students.  Technology can also allow students to manipulate visualizations or participate in online environments that provide immediate feedback, allowing them to continually test their thinking.

Confrey, J. (1990). A review of the research on student conceptions in mathematics, science, and programming. Review of research in education, 16, 3-56. http://ezproxy.library.ubc.ca/login?url=http://www.jstor.org/stable/1167350