In grade 2, a challenging concept for students is ‘forces influence the motion of an object’. This is a Big Idea in BC’s new curriculum for grade 2 (BC Ministry of Education, 2015). Through observations, experiments, and evidence of student learning, it is clear that many students struggle with the concept of force and motion because they hold faulty beliefs derived from living in a world where unseen frictional forces operate (White, 1983). For example, in a grade 2 unit we learned about ‘push and pull’, specifically how force always occurs in pairs, Newton’s third law. After many lessons, videos, and examples, one student came to me and said, “If I push a door open, it’s pushing me with the same force? How can a door push me?”

A digital technology that can work to improve this concept is STEAM, an app that teaches the basics of force and motion. The app uses simulation to help students investigate force and how it affects motion. Students can use the simulation to work through the main concepts with 4 different interactive lessons. I would like to use this next year with my grade 2’s in partnerships. (http://www.teachthought.com/the-future-of-learning/technology/steam-app-forces-motion-simulation/).

In my design of a 3-step T-GEM cycle for this concept, I wanted to include student observations and investigations on force and motion, as well as iPad use with the STEAM app for digital experiments.

I would have students use a KWL chart (Know, Wonder, Learn) to fill out what they already know, or think they know about force and motion. Then I would have them compare in small groups. This will be used as an assessment tool for me as well to see what their pre-existing beliefs are, as well as to see the growth in their learning at the end of the unit. As a class we will watch the introduction Brain Pop Jr videos to force and motion. Students will share what they think the relationship is between force and motion. In partnerships, students will predict, compare, and explain different examples of force in a hands-on activity. 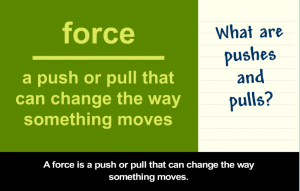 Students will test their predictions in a hands-on activity. Students will use the STEAM app to investigate force and motion. Students will compare their predictions and observations after both hands-on experiments and virtual experiments. Students will come up with “I wonder” questions to help further guide their inquiry. As a class, we will work through a number of picture books to reinforce the concept of force and motion, as well as incorporate different visual videos. Computer simulations enhance concepts and allow students and teachers the opportunity to view visual representation  in more concrete ways which may lead to more accurate conceptual understandings (Khan, 2011).

Students will take pictures of their experiments to later document in Book Creator.

Students will use Book Creator app on the iPads to reflect on their observations, taking into consideration their original predictions. Students will share their books with the rest of the class. As a full class we will discuss their observations, ideas, and further questions. Structured inquiries will occur to help guide and prevent any misconceptions surrounding the concept of force and motion to answer any “wonder” questions that were not answered.