TLDR;  We designed and flew a helium balloon probe and studied the complex system of forces through PHeT simulations.  I’d conclude that age and stage of the students matters a lot, making the teaching of “real world” science to K-10 a unique challenge requiring more than good simulations.

This summer I ran a STEM program with a colleague.  One of our projects was to make a cheap, simple aerial probe using Helium balloons.  The ultimate goal was to send various probes to collect data at inaccessible heights in the area around the school.  Jacobsen and Wilensky (2009) describe a complex system as having many interacting parts that are interdependent.  With no fewer than five independent parameters, this certainly qualified!  Our first probe (by student preference) was a camera.  We ran the lesson in five parts, loosely following a T-GEM model of exploring and modifying a model.

Lesson 1:  What is buoyancy?

In groups, students defined buoyancy, and tried to describe the model by which it worked, using words and pictures.  Everyone agreed that buoyancy acts upward, but there was a split as to what causes the upward motion.  Competing theories included reduced gravity, air pushing up, and helium pushing up.  Given ten balloons each, groups had to measure and report how much buoyancy each balloon offered, in units of their own choosing.  Most went with things like “paperclips/balloon”.

We discussed standardized units and the SI system from the previous class.  Students were given access to the PHeT module “Balloons and Buoyancy” and asked to answer the question:  What parameters can you control to make the balloon have the most buoyancy?  This activity was difficult to use—the display had too many options for them, but they did eventually agree that a cold, external heavy species gas, and hot, light species balloon gas was the best combo.  As Stephens and Clement (2015) note, hands on the keyboard sometimes means mind elsewhere, and students often need heavy scaffolding to use these simulations effectively.  We tried “pairs programming” in which students work in pairs, which seemed to help.  Stephens and Clement (2015) also suggest that student generated questions can be very effective.

We determined how many balloons were required for our load, and flew a balloon camera.  It was awesome.  Students agreed that our model of how much lift we should get was less than expected.  Also, wind complicated our model.  We collected observational and height data. 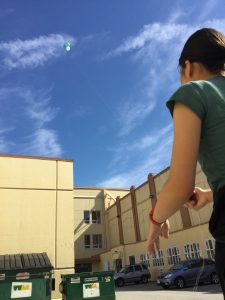 Lesson 4:  Buoyancy as a Force

We agreed that based on observation, many things were pushing on the balloon at the same time.  We used PHeT a second time, with another buoyancy simulation.  This time, students were asked to name and describe the forces pushing on the blocks, and how to maximize the buoyancy.  They seemed unbothered by the fact that it was blocks in water, not balloons in air.  Everyone figured out to minimize the mass, and maximize the volume.  Nobody referred to this in terms of density.

Lesson 5:  Putting It All Together

In designing our second probe, students were asked to list all the parameters that the system depended upon, and how to optimize them.  This was compared to their Lesson 1 drawings and definitions, and they had a discussion about the difference.  Ultimately, they did embody that buoyancy is actually the combination of many forces.  They could show physically how to control buoyancy.  They could not, however, make the words come out.  It is hard to say if this is problematic.  Most of them identified buoyancy as the central controlling force that acted upward.  While true from an outside perspective, it lacks granularity or a casual link between buoyancy and forces with other origins.  On the positive side, most of them agreed that they had not considered that more than one force could be acting at the same time, which is perhaps the beginning of a “strong” or “radical” conceptual change (Jacobsen and Wilensky, 2009).  The second probe flew better, but had very wobbly footage because of the winds.

Q:  When is the best age/stage to engage in more complex systems?
Q:  If students are motivated by real phenomena, but studying that phenomena is complex, is there a high quality middle ground?

Jacobsen, M. & Wilinsky, U. (2006). Complex systems in education. Scientific and educational importance and implications for the learning sciences. Journal of the Learning Sciences, 15(1), 11-34.