In A Private Universe, Heather’s challenges come from a number of places:

Heather’s misconceptions tend to be around phenomena she can’t observe.  As Driver et al (1985) states, “some elements in the structure of a scientific theory do not correspond to direct perceptions” (p. 5).  Because of this, Heather must assimilate knowledge of her perceived environment with the theoretical or unobservable.  The demonstrations her teacher led with the model of the solar system were helping to correct her understanding.  Posner et al (1982) theorized that to change a misconception, a person must: be dissatisfied with current conceptions, have the ability to understand a new conception, have an initially plausible new conception, and the new conception must be seen as means to open up new learning.    Heather’s old thoughts had a stickiness to them – whenever Heather was questioned beyond a point of her comfort zone, she would return to her old explanations.  When it came to her description of the seasons, it sounded like she was on the right track, but misconceptions revealed themselves when she was questioned.  Chi (2005) would point out that Heather was mis-categorizing an ‘emergent’ process as a ‘direct’ process.  Her ideas of direct and indirect light seemed to be based on her observed notions of reflection.  The observed direct process was so powerful in her thinking that she was able to ignore the fact there is almost nothing in space for the sun’s light to reflect off to ‘bounce’ back at Earth.

As a teacher, I remain an optimist about my student’s ability to adapt to new ways of thinking.  For Heather, I hope that, as she integrates correct information into her understanding, it will replace misconceptions.  It seems to me that the deeper her inquiry and the more frequent her exposure to the correct information, the more likely Heather is to rewire her brain away from the misconceptions she holds (though maybe that is my own deeply held misconception!).  While I was watching the video and listening to all the Harvard grads explain their flawed view of the changing seasons, I found myself shaking my head and feeling quite smug.  Later, I reflected on Heather’s interview and remembered how her improved explanations fell to pieces when she was questioned and probed deeper.  As an experiment, I began asking myself deeper questions about my own understanding of the seasons, and found it didn’t take long until I was out of my depth.  The fact is, there is a point at which every person’s understanding on a given topic comes to its limit.  Like the signs on ancient maps, ‘beyond this place there be dragons’, it is imagination, educated guesses, and misconceptions that live in that place beyond our understanding.

I remember when my dad brought home the first computer my family ever owned.  It was a Tandy.  It took about an hour to boot up, and seemed like a box that I knew had a lot inside it – things I didn’t have the knowledge to access.  We learned the little tap-dance of command prompts to play games like Kings Quest (run on the big old floppy discs that we had to continually shuffle at the prompting of the game).  When my dad wasn’t home, we would play the copy of Leisure Suit Larry that he didn’t know we knew he had.  I thought it was so scandalous!

Most of the time, though, I felt illiterate when using the computer.  I was constantly messing up the command prompts and felt locked out.

Now I am considered a bit of a techie by my peers.  I find it a bit funny, though…I think that it is more the work of many years of improving software design, user experience design, and layers of user friendliness that have made it possible for me to use computers with some modicum of success.

The 7 year old kid is still in there – the one that knows that there is way more to this little box than I am able to access.  I still feel a little locked out from time to time – the computer and I can talk a bit more easily now, but I it is in translation, and our jokes often go over each others heads. 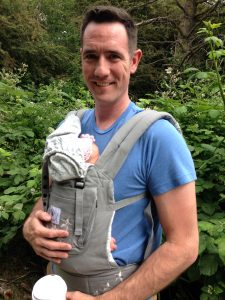 I am a middle school math teacher, so I am keen to bring as much of my learning as possible into my teaching practice.

In my spare time, I enjoy spending time with my amazing wife, Katie, playing with our three kids, and surfing whenever I can.

I’m looking forward to learning with you all!