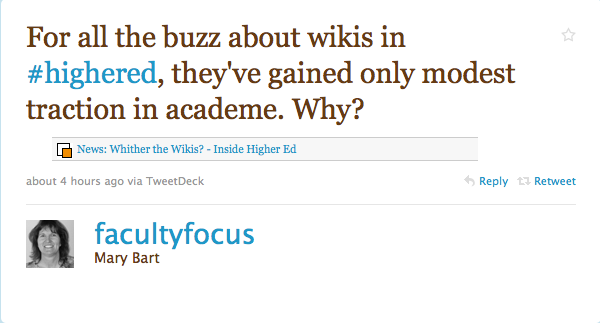 Based on today’s buzz on Twitter, one might think there’s an emerging consensus that wikis in higher education are a dead end, or at least a bad fit. A big part of that perception would be drawn from the title of the Inside Higher Ed piece they are responding to, “Whither the wikis?”

The title is unfortunate, because I think author Steve Kolowich (who interviewed me for the piece) makes some worthy and astute points that get lost in a broader implication (ie, wikis are over) that strikes me as unfounded.

Since I am a relentlessly affirmative person, I’ll start with the stuff in the article I agree with.

Wikis have mutated. Wikis have evolved since the days of Ward Cunningham. Jason B. Jones, an associate professor of English at Central Connecticut State University is quoted: “While it’s true that there aren’t a ton of formally wiki-based scholarship projects out there, there are lots of resources that are, if you like, wiki-inspired… Whether it’s the idea of user-generated content, or inviting many eyes onto a project (e.g., CommentPress), or, tools that facilitate collaboration, such as Google Docs or Zoho Office, wiki-like ideas are increasingly important to the scholarly community.” A lot of the activity that might have happened on a wiki a few years ago (like co-authoring a paper with a few people) is obviously better suited to an environment like Google Docs. And if the intent is to invite discussion and annotation on a substantive work, then a more structured format like WriteToReply has obvious advantages. But these developments don’t suggest that wikis are obsolete, but that they have evolved and can take many forms. And CommentPress is just one example of how the better content management systems have developed to support collaborative writing and editing.

People have identities. Kolowich points to the disappointing uptake of projects like Scholarpedia and AcaWiki as evidence of the failure of wikis to take hold in higher education. In fact, if I read the article correctly the failure of these projects to take off is the only evidence presented that wikis as a technology are in decline. (And even on this point, the article acknowledges that some discipline-specific or community consultation wikis seem to be quite successful.) Does the lack of activity on these cherry-picked “broadly imagined academic wiki projects” reflect on the technology itself, or on a misguided impulse to create centralized, homogenized spaces for inquiry? The article notes the need for individual contributors to receive attribution, which is a fair point, but I think the problem goes deeper than that. The web should be a place that can facilitate a wild diversity of perspectives and voices — that’s what makes it such a cool place. Creating some sort of superstructure and expecting people to willingly subsume themselves to its logic makes no sense outside of certain specialized applications (like creating an encyclopedia, for example). This highlights a niggling dissatisfaction of mine about some OER discourse, which seems to envision resource creation processes so standardized that distinct and idiosyncratic voices are put at risk.

But broadly writing off wiki technology based on these observations oversteps the argument. There is obvious value to wikis as part of an online toolkit, especially for the creation of open content. I think WikiEducator has been a success, I certainly admire its role in the open education community. I’ve been part of a few collaborations hosted by the New Media Consortium (the Spanish language Horizon Report, the Open EdTech group) where the wiki played a useful role in facilitating on-site and virtual collaboration working toward the creation of a formal paper. There’s the NMC’s original Horizon Report itself, of course.

And let’s not forget the imaginative and valuable work that can be done on wikis housed outside formal academia, like Wikipedia.

Closer to home, wikis are a bigger deal at UBC than ever. We have the newly launched UBC wiki, which people can use for everything from one-off pages to extensive ongoing research for specialized topics or courses.

The wiki is also integral as the content engine for our emerging online publishing framework. For instance, our unit has developed a WordPress plugin that allows MediaWiki content to be rendered live within any WordPress environment. (You can get the plugin here.) For example, this faculty resource guide can be rendered in WordPress here. It can simultaneously be syndicated anywhere else (such as a partner organization), with the content adopting the look and feel of the local site.

We also provide YouTube-style embed code in the “toolbox” on the left-hand sidebar of our MediaWiki pages so people can grab syndicated, dynamic open content themselves and put it in any web environment, including an LMS (wiki version here).

Why do this? Well, imagine a widely used piece of content like a basic WordPress how-to tutorial. This open content tutorial might be re-rendered in more than a dozen places, many of which we may not know about. If the content is updated once on the wiki, that update is automatically rendered on all the downstream environments.

Also, our MediaWiki install uses a pretty slick “Wiki Book” extension, which allows users to assemble, organize and print cleaned up PDF copies of any wiki pages on the system. (Our resident web guru Novak has posted a screencast of the process.)

So using the wiki as the foundational environment for our content creation allows for easy collaborative writing, and maximum flexibility and reusability. We see big potential here… for open content in courses, for our internal (but shared) documentation, and much more.

Other units here are beginning to use this framework for much of their own online publishing (I’ll share these examples as they develop, some of them look great). We have even hired a graduate student in library studies to be our “wiki gardener”, to gently guide activity and to help put structures in place to provide a semblance of order without losing the flexibility that makes wikis great. Check out Will’s fantastic blog on his process and thinking, it’s an incredible evolving resource in itself.

If wikis are dead, it’s a freakin’ zombie-fest over here.