Are Smartphones Detrimental to our Health?

For many of us, smartphones are the last thing we use before bed and the first thing we reach for in the morning. However, this can be detrimental to our health because of the blue light that is emitted from smartphone screens. This is problematic as the number of smartphone users is expected to reach up to 2.87 billion by the year 2020. 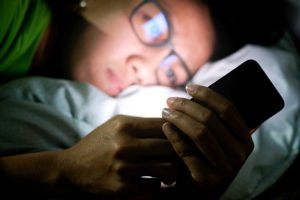 How Blue Light Controls our Sleep

Blue light disrupts our circadian rhythm also known as our body’s sleep-wake cycle. Our circadian rhythm is controlled by melatonin, which is influenced by its exposure to light. During the day, visible light from the sun decreases melatonin levels. This reduction in melatonin allows us to stay awake. On the other hand, during the night we aren’t exposed to the same high-energy light from the sun, therefore, this increases melatonin levels and allows us to sleep. However, smartphones contain an artificial blue light that has the same high-energy visible light that we would get during the day. Therefore, using a smartphone before bed can disrupt the sleep cycle because of the decreased amount of melatonin that the body is receiving. In turn, a reduction of melatonin can prevent sleep which will ultimately lead to exhaustion.

Nonetheless, it is not practical to get rid of our phones in order to protect our eyes from blue light. However, there are a few things we can do to keep our eyes safe as well as our health. A 2018 study concluded that going to bed without having any smartphones in the room improves a person’s quality of sleep. They also suggested that sleeping without smartphones will improve relationships, focus and overall well-being. Another cost-effective solution is to buy a glare-reducing screen cover for your phone that will help prevent sun and light glare.

Overall, as tempting as it may be to scroll through Instagram one last time before bed, is it worth disrupting your body’s natural sleep-wake cycle? Definitely not.

If Focusing Was Just This Easy

We’ve all been there: either we’ve procrastinated by leaving all of our studying to the last day or, we’ve forgotten to do a paper until the night before. This is often where study drugs are introduced. 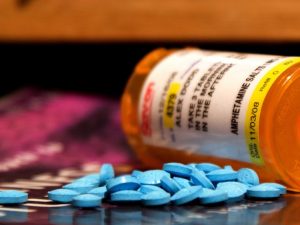 Adderall is a study drug, also known as a smart drug that is often prescribed to individuals with Attention Deficit Hyperactivity Disorder (ADHD). However, like many other prescription drugs, people have been using Adderall for purposes such as recreation and studying. As reported by the National Survey on Drug Use and Health, roughly 6.4 percent of college students have been found to use Adderall for recreational purposes. Particularly, most students think that Adderall will strengthen their ability to study. Although an Adderall prescription must be obtained from a doctor, people still have access to this drug from other sources.  A 2016 Recovery Brands survey showed more than 60% of individuals aged 18-28 get their hands on doctor-prescribed Adderall through family, classmates and street dealers. 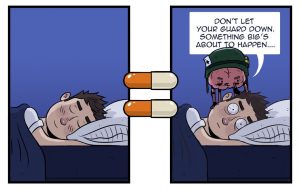 This drug works by increasing the amount of dopamine and norepinephrine in a user’s brain. Dopamine, also known as the pleasure centre of the brain, is responsible for our fight-or-flight response which controls focus, clarity and alertness. Norepinephrine helps to make all of these behaviours last longer. Combined, these two neurotransmitters allow the user to stay more focused, be more alert, pull all-nighters and be more efficient while studying.

Nonetheless, the side effects of taking Adderall can be very detrimental to users. Some symptoms include irregular heartbeats, high blood pressure, nausea and loss of appetite. There has been a recent study showing correlation between this study drug and long term memory loss. Additionally, just like with any other drug, there is potential to become addicted to Adderall. According to the Drug Enforcement Administration’s Schedule II list of substances, Adderall is classified as a drug with a high potential for abuse that can lead to physical and psychological dependence.

Overall, study drugs may help you stay awake in order to cram information before an exam, but are the “benefits” worth the negative effects? Definitely no.