The controversy over human gene-editing : a scientist shocked the world with baby gene editing

In sci-fi movie Gattaca, the future society is in the era of eugenics where a social hierarchy is determined by DNA. In Gattaca, gene editing has become prevalent for the rich to genetically engineer their babies. Those babies will be born with artificial superior genes and will become the next leaders of the society in the Gattaca world. Only the beneficiaries of gene editing are predestined to rule society. The movie came out more than 20 years ago and finally (like the movie), at the end of last year, for the first time, gene-edited twins have created by a scientist named He Jiankui. Is our society entering the era of human gene-editing?

In November 2018, He Jiankui, a gene scientist, announced to the world that he had created genetically engineered twin babies with CRISPR-Cas9. The CRISPR-Cas9 system is originally found in bacteria and recently adapted to our gene-editing technology. An enzyme called Cas9 binds a target DNA and splices it. It acts like “DNA-cutting scissors”. After cutting DNA, scientists can add or remove DNA to the target. With this powerful technology, in 2015, Chinese scientists genetically altered human embryos. Now, we must think about an ethical issue and the consequence of human gene-editing. He Jiankui, the scientist who is responsible for the first gene-edited babies (Source: Genengnews, click the image to visit the website)

Scientists had a global discussion over three days December 1 – 3, 2015 in Washington, D.C. and they made a public statement about human gene editing. According to the statement, “it would be irresponsible to perform gene-editing for human embryo without knowing the consequence”. Gene modifying technology has a relatively short history in science and we are not 100% sure its safety.

The issue with gene-editing is not only confined to the ethics and there are several reasons why human embryo should not be genetically modified now. First, inaccurate editing can harm embryos. Second, it is impossible to predict how altering certain genes interact with other genes and the environment because of its complexity. Third, we must consider the individual and the future generations who will carry the genetic alterations. Fourth, once introduced, genetic alterations will spread all over the world and we cannot reverse it. Fifth, some people can use it for genetic ‘enhancements’ and worsen social inequities. Until we can handle all the five possible risks listed by the statement, gene-editing should not be used for human babies. Even we are not 100% sure that Genetically modified foods (GMO) are safe. We can only say that so far no major hazard has not been shown.

In many countries, it is illegal to edit gene in human embryos for ‘clinical use’ and last year, He Jiankui broke the law and created genetically modified human babies for the first time. We must consider this incident seriously with a view of ethics and science.

Posted on March 11, 2019 by DanChoi in Biological Sciences, Issues in Science, Public Engagement, Science Communication, Science in the News

First plant to grow on the Moon ever!

Do you think we can one day sustain life outside of Earth? Perhaps one day in the future, but when will that be? That day may be sooner than you think!

The first time biological matter to  sprout and grow on the moon has been achieved! On January 2nd 2019, China’s Chang’e-4 lunar probe landed on the far side of the moon where no human or robot has ever ventured before.  It carried a “lunar biosphere” experiment containing plant seeds and silkworm eggs.  The plan is that the plants provide oxygen for the silkworms, and in turn, the silkworms will nurture the plants with its waste and released carbon dioxide. There are potato, rock-cress and cotton seeds among the seeds carried on board.  The “biosphere” experiment is all contained inside a 0.8 liter aluminum alloy cylinder weighing in around three kilograms and includes nutrients, water and dirt.  Sunlight is filtered into the container through a tube with small cameras set up inside. The cameras watch the environment and relay the footage back to Earth through a complicated relay system. The accomplishments so far show great progress towards sustaining life on the moon. 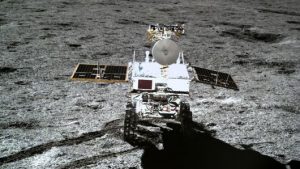 The Far Side of the Moon

The moon’s rotation speed is in sync with Earth’s orbit.  This results in the moon rotating on its axis and also orbiting the Earth every 28 days.  The same face of the moon always faces Earth, and the side we can’t see from the planet’s surface is considered the far side.

Why is it hard to land on the far side of the moon?

To put it bluntly, the moon blocks radio contact to Earth and makes it very difficult to maintain a communication link. To overcome this issue, in May 2018, CNSA launched a satellite Queqiao into orbit around “L2.” L2 is a point beyond the moon where the gravity of the moon and Earth cancel out the centripetal force of an object stationed there. This satellite helps bridge the gap between the Chang”e-4’s lander and mission control.

China has sprouted plants on the moon! 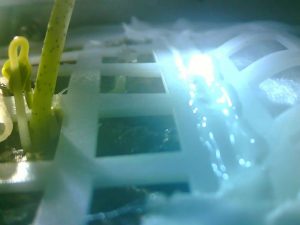 A picture taken on January 12th 2019 of the cotton seeds growing after the excitement of them sprouting a few days prior. Source: Chongqing University.

Out of all the germinated seeds (rapeseed, potato seed, cotton seeds), the cotton seeds were the first to sprout.  This amazing breakthrough could be the start to a new era and displays great progress towards a system where food ( such as potatoes), clothing (from the cotton), and oil (from rapeseed) can be sustained for space explorers.  Being able to grow plants on any celestial body outside of Earth will be necessary for any future human settlements outside of Earth.

In the future, if things go as planned, China will launch Chang’e-5 sample-return mission later this year. Let’s all look forward to the future progress together! Keep an eye out!