Whether you are vegan or not, you have probably seen plant-based milk like soy milk or almond milk at grocery stores, coffee shops, and more. However, ever since genetically modified soy received a lot of coverage in recent years, almond milk has become one of the most popular choices for plant-based milk. In the US, sales of almond milk already surpassed soymilk. While some people are simply allergic or lactose intolerant, some believe that almond milk is a better option for their health and even for the environment. 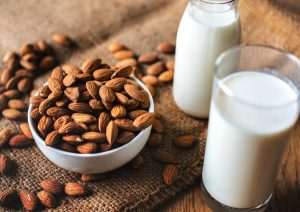 Which milk is healthier?

Milk is a great source of nutrients such as vitamins and minerals. It is important for people to meet their daily nutrition values in order to stay healthy. However, not all milk offers the same level of nutrients. For example, in one cup of milk, regular whole milk contains 276 mg of calcium. On the other hand, unfortified almond milk contains 61 mg of calcium. It is a well-known fact that calcium is necessary to keep our bones strong. It is especially important for kids to get enough calcium because it may lead to serious health problems such as osteoporosis. Dietitians recommend that when shopping for almond milk, one should check to make sure that it has been fortified with nutrients that provide enough amount of the recommended daily value.

In this podcast episode from Science Vs, an environmental scientist Joseph Poore discusses types of milk including soy, almond and oat milk and their impacts on our plant in more detail.