Chronic obstructive pulmonary disease (COPD) is the fourth leading cause of death in Canada and is currently affecting nearly 2 million Canadians 35 years of age or older. This incurable, progressive disease is described to feel as if you are slowly drowning making it clear how much damage it can cause.

Picture the lungs as networks of different branches from one trunk. As these branches move further out, they will branch off more and become smaller and smaller. As you can imagine, damage to these branches can have catastrophic effects where patients slowly lose their ability to breath. This is what happens to people with COPD. These branches become damaged causing inflammation and narrowing of branches called bronchi. This damage can make it so hard to breath that even a quick trip to the fridge seems impossible. Due to its progressive nature, researchers are looking into treatments that can reduce the progression of COPD. 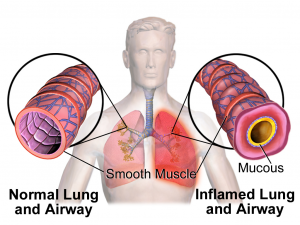 Early detection is a key component to controlling COPD progression. The Global Initiative for Chronic Obstructive Lung Disease (GOLD) has been established for standardizing COPD progression. GOLD creates a 4 staged index from mild to very severe COPD based on a breathing test that assesses lung capacity. This helps doctors to understand how damaged the lung tissue.

Although this has been an excellent tool for diagnosing COPD, researchers have noted that some of the very fine, small branches, where gas exchange occurs, are not well understood. Understanding this gap of knowledge between lung function and onset COPD is critical for developing effective treatment plans.

A recent study published by investigators from the Centre for Heart Lung Innovation was some of the first to try to fill this hole. The results were astounding, showing that nearly 41% of the terminal bronchioles are lost in mild and moderate cases of COPD. This would mean that patients who present very little symptoms are already losing a significant portion of their terminal branches. When finally diagnosed, the disease may be more advanced than previously thought. Even more importantly, mild and moderate COPD patients receive minimal treatment according to current guidelines- these results may change that protocol. 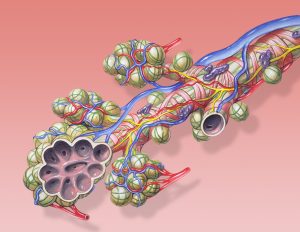 The knowledge gained from this study may help to explain why many clinical research trials for COPD have fallen short. If disease progression is more severe than originally believed, the cohorts being used may not be appropriate for the study. This result may change how many studies are structured in the future.

The researchers have emphasized that these results are preliminary, and more research should be done with larger cohorts before any large conclusions can be drawn. However, this does start the conversation on current treatment plans and where changes may need to occur to better diagnose COPD in its early stages. This in turn will hopefully lead to better outcome in treatment of its progression.

The Flu Shot Debate- Does it really work?

Every year, we are reminded all around us by advertisements, pharmacies, doctors, even family members to get our flu shot so we won’t get sick! However, there are some that are skeptical when they see flu shot advertisements and campaigns. The general public debates on whether this shot actually does anything beneficial and are skeptical when reports come out every year of vaccines not being as effective as they should be or deaths from the flu such as this article here. 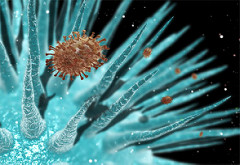 So, to be a voice of reason in this massive debate, one first needs to understand how the flu shot actually works and why there have been past years where the flu shot has failed tremendously or has had huge success in keeping people healthy.

Between flu seasons (Spring-Summer), scientists’ study previous month’s “flu-trends” and base the vaccine they make for the year on this information. The influenza vaccine is first made in lab months prior to our annual “flu-season” (Fall through Winter) and then injected into hen eggs where the virus can multiply. The next step in the process requires the virus to enter a weakened, inactivated state. This inactive state prevents the virus from further mutation in the human body, which would otherwise consist of flu symptoms. Vaccines are then made with the inactivated flu virus.

The timeline for this process can be problematic in that the preparation of the vaccine occurs months before the current strain of influenza affects the general population. The time which the vaccines are modeled after the flu virus strains to when people can actually receive the flu shot is approximately 6 months prior to distribution. This leaves plenty of time for the flu virus to further mutate. This is why in some flu seasons the vaccine can target the completely wrong strain of influenza, thus leading to a useless vaccine.

However, according to the Centre for Disease Control and Prevention (CDC), flu vaccines can reduce the risk of illness and symptoms by 40%-60% on a good year when the vaccine closely matches the circulating strain.

Now to answer the question; Does the flu vaccine really work? The answer I believe most accurate is yes. Although there is potential for the flu strain to mutate to something that does not match the vaccine exactly, little protection is better than no protection, and by getting the flu shot you are not only protecting yourself but also those around you.