Polar what is….. Vortex?

What is a Polar Vortex?

The first thing that strikes to my mind when I say “Polar vortex” is some phenomenon related to earth’s poles. We are hearing a lot about the polar vortex lately, but it has been around a few decades. These are strong and cold winds originating around the Arctic region. These winds originate specially around the North Pole which which are capable to enter parts of United States and Canada. These winds can be strong enough to create very low temperatures around these areas.

An image depicting the region of flow of the winds. 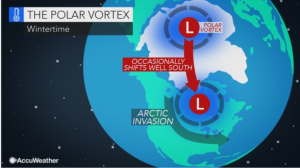 The following video is posted by USA Today and talks about the Polar vortex and its effects.

Recent Effects of the Polar Vortex:

United States: The devastating weather conditions brought by the Polar Vortex around January 31st killed at least 8 people in several places around the US.

Following video shows a river turning into snow in Chicago

The following image shows all the regions that faced the consequences of the Polar Vortex: 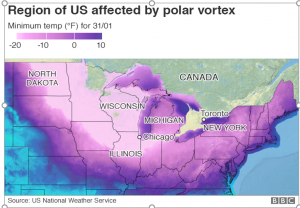 Areas affected in the USA by the polar vortex, https://www.bbc.com/news/world-us-canada-47055952

Canada: Canada has been affected in regions of Ontario and Quebec. The temperature fell to -30 degree Celsius in these areas. Canada has witnessed polar vortex earlier in 2015 as well. But this year, it had much worse effects.

The following video demonstrates the areas affected in Canada.

These changes have also been observed in Vancouver, with extreme cold snow days even in the month of February. We observed entire days of shutdown due to this extreme weather.

The heat wave at Australia when North America faced harsh cold winters due to polar vortex:

As shocking at may seem, when North America was facing polar vortex, Australia was suffering from extreme heat waves. How can this happen? It was the hottest in 80 years! This climate change is not what anyone expected and has been a major concern for environmentalists. 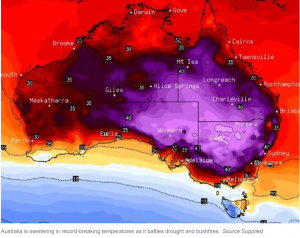 The reason behind these extreme climatic variations:

This is caused by global warming, which can be said as a man-made climatic change. This caused by the burning of various fossil fuels such as oil, gas and coal which release CO2 to the atmosphere. This extra release of CO2 in the atmosphere leads to an increase in the temperature of oceans as well as lands. Also, there is a strong link between the extremities of the weather condition and global warming.