Threats From the Microplastics: Do you want plastic?

We are all familiar with plastics because we use plastic every day. However, have you ever thought about where the plastic will go after you dump the plastic? Since the plastic is made out of polymers, which is hard to break down, most of them will stay on the earth for hundreds of years. The more severe problem with plastic pollution lies not in plastics, but microplastics.

Microplastic is a kind of small peice of plastic. (Source: https://mitte.co/2018/03/20/microplastics-threat/)

What is microplastic? Scientist defined plastics whose size is 5 mm to 10 nanometres as microplastic. There is two sources of microplastic; first, primary microplastic man-made microplastics for economic purposes such as cosmetic products, cleaning products and fibre from clothes. Another is secondary microplastic, which is the large piece plastics will be broken into small parts or been degraded to particles by the ultraviolet (UV) rays. 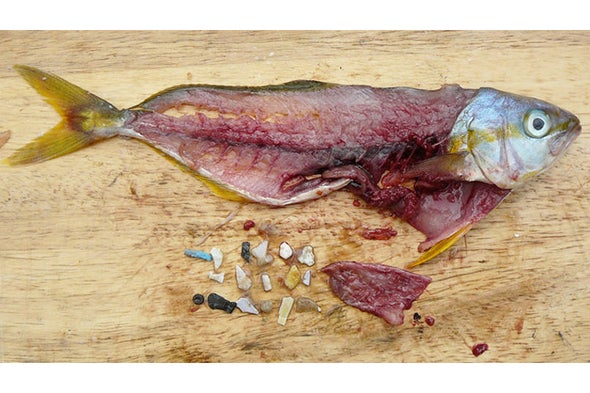 The size of the plastic would not entangle or chunk animals, but instead, they can be consumed as food and enter the animal’s body because of microplastic looks like eggs and small plankton. Although plastic do not contain some acute toxic components which can kill marine organisms immediately, the attracting properties of plastics will accumulate the toxic chemicals on the surface of the plastic and the toxic chemical additives inside may leaching out.

The toxic will accumulate through the food chain, as long as small organisms like micro-organism and algae consumed the microplastics. Since the microplastics can transfer to everywhere, it has been found inside of some commercial fishes. Finally, sea food will be intake by human. Therefore, people exposed to the threat as well.

Therefore how to solve the problem? The technology today is insufficient to recycle the microplastics in the ocean, but we can stop the source from damaging our environment more. First of all, educate people to place their garbage well, and prevent visitors to dump waste into the ocean. Secondly, it is essential for the government to publish regulations and rules to avoid artificial microplastic. Also, in the future, we can develop new technologies for detecting and collecting the microplastics from the polluted area. Finally, we should use as less plastic as we can in daily life.

To learn more about the threats from the microplastic, watch the folowing vidio:

A Brief Analysis on the number of live births in Canada

Over the past decades, Canada has been converting from a high-fertility society to a low-fertility society continuously. While the number of kids in a family keeps decreasing, the moms are getting more and more aged.

The fertility rate in Canada has remarkably decreased over decades.
Source: Statistics Canada

Well, how much impact does this reduction have on the population in Canada? Let’s take a look at the data of live births in Canada over a recent dozen years.

With the development of Canadian society, birth rate, birth weight and their relations to genders are affected by a variety of factors, such as lifestyles, environment, financial conditions and some biological reasons.

The dataset ‘Live births, by birth weight and sex, Canada, provinces and territories’ contains number and percentage of live births sorted by birth weight, sex and areas in Canada through 2000 to 2014,  accessible via Open Government Portal, Government of Canada. 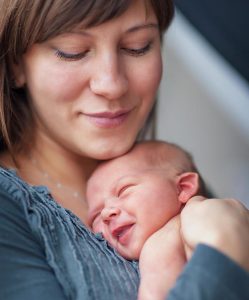 According to a scatterplot of the overall trend of birth rate in Canada, 2000-2014, there is a consistent increase during the period of 2002 to 2008, and the number of birth increases rapidly from 2005 to 2009. Even though there are some fluctuations in these years, the overall trend is going up. 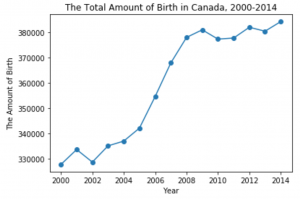 The amount of birth in Canada has soared over the 14 years.

From the further analyses conducted with the dataset, a more detailed idea of birth amount and birth weight in Canada in recent decade has arose. From 2000 to 2014, the overall amount of live births obviously increased by 4746.92 per year, but it fluctuated between 2000 to 2004 and 2008 to 2014. The period when the birth rate rapidly increased is from 2004 to 2007.

Fortunately, according to the above analysis, the number of live births in Canada over the period 2004 – 2007 was not influenced as badly as it looks at the first place. Even though factors that could negatively affect the population in Canada would always go with the development of the country, it can still be seen that the amount of newborn babies remains quite satisfactory from year to year.