Is it Me or is the Sea Rising?

Sea level rise – the consequence of climate change that is creating fear in societies across the globe, especially those in low-lying coastal areas. Sadly, climate scientists have not been able to quantify how much the sea will rise. Why? It depends on where you live.

Believe it or not, land can rise (rebound) or fall (subsidence). For instance, Canada is rebounding as it was compressed under the weight of glaciers during the last ice age. In contrast, land masses such as South England are experiencing subsidence as these non-glaciated areas had been elevated by glaciers in the periphery. A modern forcing to land subsidence is the exploration for natural resources like oil and gas. Resources are found in subsurface deposits, but once these units are drained of their contents, the subsurface material will collapse from the weight above. Clearly, the glacial history and economy of your region do have an impact in whether you are moving towards or away from sea level.

The gravitational force, the same pull that keeps you planted on Earth, can have an impact on sea level rise. Gravity is defined as an attractive force between two bodies of mass. The interactions of most importance exist between seawater and the Greenland & West Antarctic ice sheets. Enormous in size (large mass), these sheets exert a very strong pull on seawater. It is so strong that water is pulled from regions thousands of kilometres away. As mass is lost during melting, the pull is weakened, and water freely flows away. Depending on your region’s relative location and the glacier’s size, some areas are expected to experience a greater sea level rise than others. For example, due to the strong pull by the Antarctic ice sheet, northern areas have lower sea levels compared to those in the southern hemisphere. Unfortunately, these distant areas will experience a relatively larger change in sea level as water is released from the pull of this ice sheet. 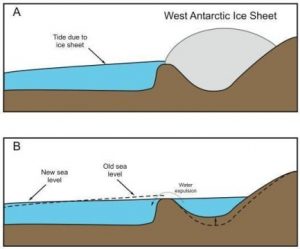 Ocean currents are changing with our warming climate and a region’s proximity to an overturn zone can influence the local change in sea level. For example, the United Kingdom is near an overturn zone (of the Gulf Stream) where warm water from the equator cools and sinks. However, it is becoming increasingly difficult for this water to sink as its density has decreased due to a warmer northern climate and dilution from the melting of the Greenland ice sheet. This results in more water at the surface, or in other words, an elevated sea level. 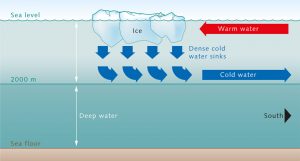 In short, regional variations make it challenging for climate scientists to quantify sea level rise. However, there are many more factors that I have not shared with you, such as the complexity behind ice sheet dynamics, which further complicate this task.

Interested in the effects of sea level rise on Metro Vancouver and/or how governments are responding? Check out the video below!