Brain Diagram by Descartes in 1664

The Natives are Restless
By Laura Bonnor and Soraya Rajan

In “Digital Natives/Digital Immigrants”, Prensky (2001) outlines the challenges for today’s teachers when confronted by the technological natives in their classrooms. In “Growing up Digital,” Tapscott (1997) suggests that the “children are the authorities,” and that teachers have to get used to that. Tapscott goes on to explain that from age 8 to 18 is the adolescent brain is creating and developing the neurological pathways that will serve them in the future. So many of today’s youth are engaged in multi-tasking with technological tools, their brains are developing differently from the brains of the previous generation. This is, according to Tapscott, leading to a ‘generation lap’. These students are able to challenge their teachers and parents with their linking, navigating pathways and networks, seeking new experiences through the ever emerging spaces on the Internet. The conventions, organization and structure of hypertext is challenging our perceptions, beliefs and expectations and even our cognitive abilities. Tapscott (1997) discusses adolescents as having a better active working memory and “switching” ability, allowing them a greater ability to multi- task. Both hypertext supporters, (Bolter, 2010) and Tapscott (1997) see it as an interactive, associative, layered and a learner centric, critical thinking environment populated by users that is spread out in all places of the world but is yet connected globally. All of this seems to suggest that there is very little room for traditional teaching practice. If this is true, what is the role of the educator in today’s schools? Are educators prepared to act as facilitators? Can the students teach themselves or rely on the technology to teach them what they need to know? Is there a role for the elders, who may be “heavily accented, unintelligible foreigners” (Prensky, 2001) in today’s technological world? It is possible that the educator with the accent has critical literary skills to analyse and evaluate hypertext materials that are not conducive to constructing knowledge and critical thinking ?(Horning, 2002). Does everyone have an accent in the technological world with some accents being left unheard? Survival will depend on adaptation through reading and writing spaces and with the assistance of a well informed facilitator. 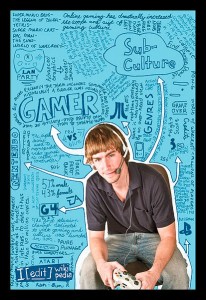 Both Prensky and Tapscott claim that “our children have changed dramatically” (Prensky, 2001) (Tapscott, 2009) While current brain research is changing what we understand about the brain and we are aware that the adolescent brain is in a critical phase of development, do we know that this change is happening faster than in previous generations? Greenfield (2010) thinks so, but since our MRI technology has only been used to analyse brain activity for the past ten years, it could also be true that major societal adjustments such as literacy of the adoption of the automobile have always lead significant changes in brain-structure. Even if we accept that this change is happening and is different from changes that previous generations have gone through, we should at least ask ourselves if and how we, as educators can support this change? According to Bolter, hypertext is constructive as reading hypertext is interactive with the reader conscious of the text moving on a virtual journey through the visual and conceptual spaces created by or with the author (Bolter, 2001). SInce reading and writing hypertext moves one beyond print text into globally connected spaces beyond the reach of those readers viewing the print text there is a major change in the use of the brain. Perhaps this can account for the changes noticed by scientists in viewing MRI’s of the brain. As educators, with brains less suited to the environment, we may find it challenging to compete with electronic learning spaces. Items that we would use in our more ‘traditional’ classroom, that we may even consider diverse, such as newspaper and radio are being replaced at a rapid pace by sources found on the World Wide Web. Don Tapscott explains that in many ways, today’s youth are moulding the culture that is expanding, driving and defining Bolter’s remediation of text to hypertext and hypermedia. Tapscott and Prensky both suggest that it is educators role to ensure that this responsibility does lie solely with the adolescent but that educators must seek out ways to share that responsibility.

Both Prensky and Tapscott feel the current education system is not meeting the needs of students. “Today’s students are not the people our system was designed to teach” (Prensky 2001) I would have to suggest that this current grade-age based system was never designed to teach children. As Goodlad (1963) and many others have chronicled, our current public education was designed on a factory model to produce a more educated and useful workforce. It is possible that technology and its promise of individualized learning sheds a harsher light on the inadequacies of this system. It seems overly harsh to create such great divide between the digital natives and the digital immigrants laying the blame for an outdated model on a rift between adolescents and educators. The challenge of adults communicating effectively with youth has always existed. The tone of the Prensky and Tapscott suggests that the leading role should be played by the youth in the education system. According to Taspcott, today’s students have the tools to question, challenge and disagree; they are becoming a generation of critical thinkers that love to argue and debate. Does hypertext and hypermedia really provide tools that are interactive and encourage critical thinking as Tapscott suggests? Does this new ‘student centered’ ideology support the goals of global society? Does it create self- directed students engaged in constructing knowledge that they find to be true? As educators, perhaps this is our place to guide students and teach them to look at many sources critically to find truth even on the NET.

Although, ultimately Tapscott and Prensky state that educators need to engage the learners and approach the problem in a balanced fashion, neither expresses any need for caution with regard to adopting technology. Tapscott cites studies that were conducted by major corporations and acknowledges the role that major corporations play in the adoption of technology but does not seem to observe that these companies and technologies may not be benign. Plensky cites that youth are spending endless hours playing video games and being digitally absorbed. While this is true for many youth, we should question if this is a positive outlook. Plensky suggests that the programs will teach the students (Prensky, 2001) He suggests that we aught to put ourselves in the hands of whichever programmer or corporation that has created the product without necessarily any critical thought or guidance. Further research by Horning (2001) in her analysis between hypertext and critical literacy have showed that students often click from page to page when conducting research; if they do not see the information that they are looking for on the first page few investigate further. Perhaps today’s youth are good at video games, surfing, skimming but what about their attention span, and their ability to select, evaluate and interpret information in a critical manner? (Horning, 2002) Can we really agree with Tapscott and Prensky that the programs and the net are positively benefiting our youth? As Neil Postman (1992) reminds us, there are positive and negative aspects to every technological change and to embrace new technology without critically thinking about all the implications is foolhardy. Students benefit from being exposed to variety and if they don’t know what a “dial” is, perhaps they should learn that the world at this second is not all there is or was. We stand on the shoulders of our ancestors.

Both articles stereo-type both the older and younger generations. It is not true that all students are digital natives and neither are all adults digital immigrants. Brown and Czerniewicz (2010) determined that technical skill was more and attribute of the “digital elite” and a product of “access and opportunity” in their study of students in South Africa. Throughout the world there are varying degrees of digital acceptance and adoption. Furthermore, these terms carry excessive baggage suggesting that one actually belongs and the other belongs somewhere else or that one is less valuable to society than the other. Brown and Czerniewicz, refer to this polarization as “digital apartheid”. Plensky makes assumptions about the level of networking that he attributes to most if not all students and certainly about the level of skill, or lack of same, of most if not all educators. There is a wide skill range amongst both groups. Prensky’s model of natives vs. immigrants only further to widen the generation gap.

The sweeping generalizations such as “digital immigrants think learning (shouldn’t) be fun” (Prensky, 2001) and that students “won’t take it” (Prensky, 2001) are generally unfounded and anecdotal. Both of these statements cater to a narcissistic cultural that it might be better to control, rather than encourage. Greenfield (2010) suggests that this attachment to video games and instant gratification be considered as similar to drug addiction and if so is it not essential that we act to protect students? It seems that we should not be so quick to denigrate certain areas of learning such as reading to a “legacy” (Prensky, 2001) skill and run headlong into the future with new, untried skills? In many ways, both Plensky and Tapscott seem too eager to throw the baby out with the bath-water. While it is true that many educators would benefit from developing skills with new technology, it is equally true that many students would benefit from continued development and reflective learning opportunities using old technologies. Brown and Czerniewicz (2010) suggest that trying to achieve a “digital democracy” might be more appropriate. The tool that they suggest is the most useful is the ubiquitous cell -phone that is used by old and young, rich and poor alike in nations across the world.

Prensky and Tapscott are enthusiastic about the potential of newer technologies to reach students and the students ability to manage the pace of change. However, they suggest a complete shift in the societal structure that gives the adolescent never before imagined control over their learning. The knowledge transfer changes from elder to youth and presumably a power would shift along with that. Given Giedd’s work on the adolescent brain and Greenfield’s concern about the effects of technology, this may be more responsibility than the students are able to manage. Tapscott himself admits that the studies for his book were funded by large corporations. It seems naive to assume that the large corporations only care about the good of society. While technology offers great potential for learning and educating in the decades to come, such unbridled enthusiasm, heralded at the cost of tradition and wisdom that pits one group in society above another, needs to be taken with a certain amount of caution.

This entry was posted in Commentary 2 and tagged Bonnor, digital natives, Rajan. Bookmark the permalink.