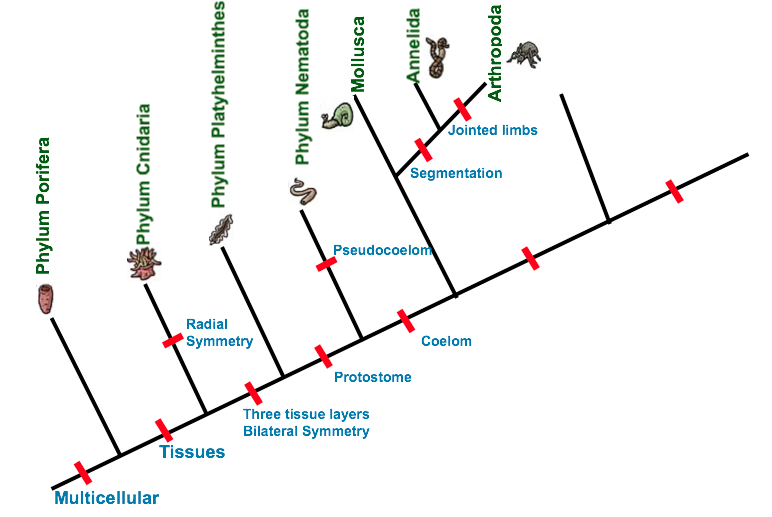 A. Evolution of Body Plan

Evolved from segmented ancestors. Segments have been lost or fused together.

So how do arthropods grow if their exoskeleton cannot grow?

Molting – The process of shedding, or losing, the rigid exoskeleton to let the organism grow.

In arthropods this is known as Ecdysis.

The body plan of arthropods can be divided in half making a right and left side that are mirrors of each other.

B. Feeding and Excretion

Arthropods have a very diverse diet due to their extremely high variation of specialized appendages.

Arthropods possess an open circulatory system consisting of heart and a system of arteries.

Open Circulatory System – Blood is pumped by a heart into the body cavities, where tissues are surrounded by the blood. The blood eventually diffuses back into the circulatory system.

2. Terrestrial Arthropods use book lungs and trachea as respiratory organs.

Trachea – Tiny tubes that run around the body to transport gases. (insects)

Spiracle – Opening to the Tracheae from the outside. How gases enter/exit.

Book Lungs – Found in arachnids. Gases still enter/exit through spiracles, but gas is exchanged in the blood in the “pages” of the lung area, rather than filling a system of trachea (as in insects) .

Please refer to Subphylums of Arthropoda hand out for more details!