Crustaceans have a cephalothorax – which is the head and thorax region joined into one section.

Which numbers are used for movement? 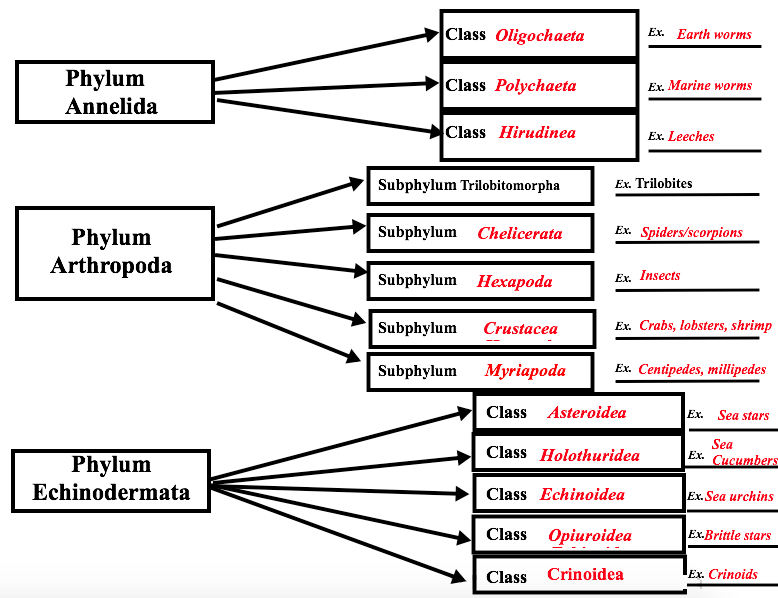 1. Sketch a diagram of a gastropod, bivalve, and a cephalopod and label the visceral mass, the mantle, the shell, and the foot in each

2. Describe ecdysis in arthropods. What is it? Why is it necessary? What are the dangers?

Ecdysis – The process of shedding, or losing, the rigid exoskeleton to let the organism grow. (molting).

It is necessary since the exoskeleton is dead and cannot grow with the organism. In order for the organism to grow and mature, it must first remove the hard exoskeleton.

3. Describe the importance of the following in terms of evolution:

2. Allowed for paired limbs to develop which increased diversity and success of animals in all environments.

3. Allowed for segmentation to develop

1. Most importantly – it allowed for fluid-filled spaces to develop within the mesoderm. This is known as a coelom! Without the development of a mesoderm, a coelom would not be possible. No coelom = no complex systems and organs. The size, efficiency, and complexity of animals would not be farther than the simple invertebrates.

All three of these evolutionary steps are tied together! They shaped our Kingdom and allowed animals to diversify, succeed, and colonize all environments on Earth! Together, they led to the development of complex of invertebrates and eventually vertebrates like ourselves.

4. Compare and contrast open and closed circulatory systems. Draw a diagram to help you.

Open System – Blood is not contained within vessles. Blood is pumped from the heart and floods the organs. It returns slowly to the heart via diffusion.

5. Describe the complete feeding process in: a) Earthworms, b) Sea stars

2. Cardiac stomach moves outside of the body to begin digestion. Powerful enzymes are released and the mussel is digested inside its own shell.

3. The nutrients/remains move into the pyloric stomach for absorption.

4. Intestine is short due to absorption in the stomach. Waste is excreted through the anus.

Both use a one way digestive system!

6. Explain how the water vascular system allows for movement in echinoderms. Use the vocab: sieve plate, ampullae, and tube feet in your explanation.

Water is pulled into the water vascular system through the sieve plate (also called a madreporite). The water vascular system is a series of canals and tubes that fill with water to act as a hydraulic system. Water fills the central ring canal and all the canals of each arm. Ampullae (little muscular bulbs) fill with water. When muscle contract, water is pushed into extensions called tube feet which expand and stretch due to the movement of water into them. Each tube foot have a suction cup on the end allowing them to stick. When muscles relax, the tube foot shrinks, pulling the organism forward. They coordinate hundreds of tube feet at a time. 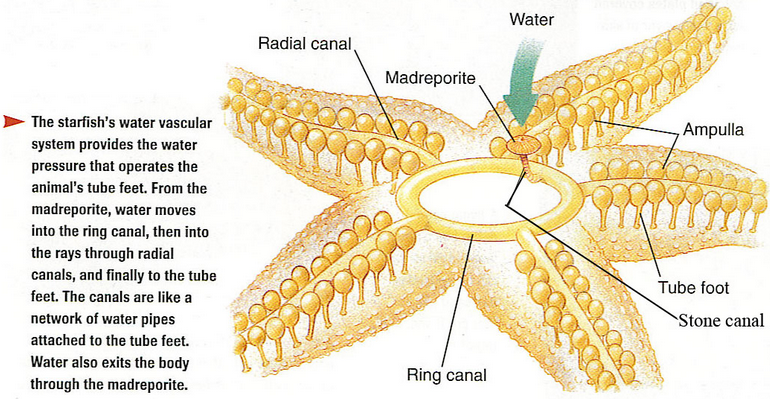 8. Describe one subphylum of arthropoda. What are the unifying characteristics? What are some examples in that group? What is one amazing fact?

Use the information sheet given in class. As we move down taxonomic levels, we become more specific. All groups share the arthropod features listed in the notes, but also have more specific characteristics.

Ex. Subphylum Hexapoda (insects) all have 6 legs and three body segments. Fun fact – Hexapoda makes us 73% of all animal species on Earth!

Additional Question: Describe the circulatory system found in a squid. Include as much detail as possible (including presence of hearts and location).

Closed-Circulatory system – blood is always contained within vessels. This allows for greater efficiency at transporting nutrients and oxygen as high pressure and velocity can be acheived. Squid have three hearts – one systemic heart (pumps blood around the body – similar to the “systemic loop” in our own system) and two gill or branchial hearts (pump blood through the gills to get oxygenated – similar to our “pulmonary loop”). This allows rapid gas exchange and a simple separation of oxygenated and deoxygenated blood. This efficiency is necessary due to the lifestyle of a squid.

Additional Question: Compare the respiratory system in insects (Subphylum Hexapoda) to that in arachnids (Subphylum Chelicerata).

Terrestrial Arthropods use book lungs and trachea as respiratory organs:

Trachea – Tiny tubes that run around the body to transport gases. (insects)

Spiracle – Opening to the Tracheae from the outside. How gases enter/exit.

Book Lungs – Found in arachnids. Gases still enter/exit through spiracles, but gas is exchanged in the blood in the “pages” of the lung area, rather than filling a system of trachea (as in insects)

Complete the table comparing annelids, molluscs arthropods, and echinoderms. All info is in your notes! Follow the example below:

The Respiratory System Part 1: Structures and Mechanisms of Breathing