After watching the cases, I want to comment on cases 3 and 6.  I was reflecting on my “Unpacking Assumptions” post, and the question of how technology is used in the classroom, and my idea of categorizing tech into either teacher-facing and student-facing.  I realized after watching the cases that there was a key element I was not considering, namely, is the technology being used to transmit information (teaching tool) or is it being used as a medium for students to demonstrate their learning (presentation tool).  The teachers is cases 3 and 6 are taking very different approaches.  Teacher A has used technology to engage students in virtual lab experiments as a source of information to students, whereas teacher F asked his students to use podcasting, GIFs, and powerpoint presentations as media for them to show their learning.  I think this is more important distinction to consider than teacher-facing/student facing.  Technology that is used as a teaching tool would likely be purpose-built for educational use.  This has advantages and disadvantages – it fits the need it is built for well, but its application is narrow in scope.  Technology that is used as a presentation tool is usually built for some other purpose, and has been appropriated for educational purposes.  The limitations here are similar, though opposite – students must make their work fit into its parameters, though its application often offers much broader possibilities.

Another issue that emerged while watching the cases was the problem of access.  Each of the teachers described a variety of access issues, from hardware, to pre-service teacher education, to professional development.  Teacher A and B (as well as their students) both describe the lack of hardware available to students – there seemed to be a lot of juggling computer time and putting more than one student on each computer.  Hopefully,  this issue has improved at the school since the video was made.  Judging by some visual cues in the videos, the video was made in the early 2000s, so it is likely that more computers are now available and it is possible that some of the programs they used would now be available on student’s mobile devices.  The case 6 teacher and student teacher, however, bring up another access issue altogether: how do teachers learn about technology they can incorporate into their practice?  This seems to be still be an issue today.  The teacher in case 6 seems to be personally interested in exploring technology on his own, and goes so far as to say that if a teacher wants to keep pace with the changing landscape, that they have to go find and learn it themselves.  The student teacher mentioned the lack of technology education in her university classes.  How will new teachers be prepared to take on the emerging edtech boom?

I think part of the problem is that k-12 teaching is not a traditionally innovative profession.  It has remained relatively stagnant in form for about 250 years, and the environment during those years has not rewarded people seeking to be on the cutting edge.  As a result, many teachers at both the k-12 level and the university teacher preparation level fall into the “laggards” category of the Innovation Adoption Cycle pictured below.  These people would see the ever-changing tech landscape as both unreliable (hardware/software become obsolete very quickly) and threatening to their traditional pedagogical methods.  This is why the TPACK framework is so important to introduce, since it provides a way of looking at technology’s role within learning in broader strokes and allows teachers to design learning that incorporate technology that plays to their strengths and the strengths of their students (Koehler, M. & Mishra, P. 2009). 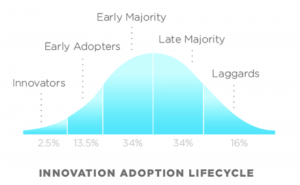