My challenging concept is the effect of the earth’s tilt on the causes of the seasons. This has been identified by Schneps (1988) in “The Private Universe” as a significant and persistent misconception within science education. Complex visualizations involving 3 dimension systems over time and changing points of view, such as is required in this case, are well documented as being particularly challenging for students of all ages (Barnett et al., 2005, Schneps et al., 2014).

In order to attack this problem through a t-Gem cycle, I have selected a Khan Academy simulation as my primary tool (https://www.khanacademy.org/computer-programming/path-of-the-sun/5075733592408064) . This simulation shows the celestial sphere and the path of the sun. Adjustable variables include the latitude of the observer, time of day, date, and tilt angle of the earth. This technology will afford students the ability to generate and examine data relevant to their latitude and the true tilt as well as provide several possibilities for extensions.

To generate hypotheses, students would first need some background knowledge in order to understand the variables. These would include the fact that the sun is the primary source of warmth on earth and that we are warmed during the day and cool at night. The following chart will guide students in their initial data collection

The students will fill in data for the provided dates first (solstice and equinox dates). From this data students would generate a hypothesis as to what causes the seasons. The will be prompted to evaluate the data and their hypothesis in light (pun most definitely intended) of their experience with these times of year as compared to their data. Do they agree? Next, students will select their own intermediary dates between those provided to check their hypothesis against further data and their own experience. Does the new data continue to represent the predicted trend? The students will then modify their hypothesis to fit and incongruous results this the help of the instructor. The cycle begins again when the students use their previously generated model to examine how this would translate to the north pole, equator, a moderate southern latitude, and the south pole. Students would then collect all their data to assemble a general theory of how latitude and time of year affect seasons on earth. The activity can be further extended into new cycle by changing the tilt angle in the simulation first slightly, the eliminating it altogether, and finally setting it to directly horizontal. 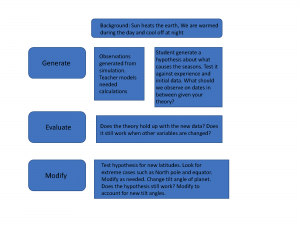 My science 6’s will be looking at exactly this topic on Tuesday when we return from spring break. I’ll try to post back here and let you know how it goes.