While the ideas behind Technology-enhanced Generate-Evaluate-Modify (T-GEM) were not new to me on their own, this particular model of thinking, leading to inquiry and ultimately a deeper understanding of concepts taught, was. I appreciated the step-by-step process by which GEM takes both educators and students through the learning process of generating, evaluating and modifying ideas; a model which I believe highlights a weakness in my own teaching of science and math. For me, one of the most important points to consider was the cyclical pattern in which GEM encourages students to create new hypotheses as they generate, examine, and evaluate new and existing data, and then re-examine and modify relationships between data and ideas/hypotheses generated (Khan 2007 & 2010). I believe I often struggle with time constraints (either real or perceived/self-imposed) which means that I miss important steps in this learning cycle. Going forward, I believe that having a model like T-GEM will help me focus my planning on creating a more inquiry-based environment in my own classroom. As highlighted by a survey item generated by Khan, students overwhelmingly felt that “having us generate, evaluate, and modify relationships in class is valuable for my understanding of the concepts” taught (in this case referring to chemistry) with 91% of students agreeing with the statement, 0% disagreeing, and 9% neutral (Khan, 2007, p.900 – included percentages; Khan, 2010, p. 227 – listed as a survey question only). While this particular survey question related to a university-based chemistry course, I believe it is true for any science-based concept that students are required to learn.

The simulations in Chemland were not applicable to my current students as I work in a grade 4/5 split class, but I enjoyed exploring the program and I recognize the incredible possibilities the simulations would provide for an appropriate age/grade group. Having said that, I could see the “Specific Heat Capacity” simulation (http://employees.oneonta.edu/viningwj/sims/specific_heat_s.html) and even “Heat Transfer Between Substances” (http://employees.oneonta.edu/viningwj/sims/heat_transfer_s.html) having the potential to be used by at least some students in a higher-level intermediate grade within an elementary school (i.e., grade 6/7).

For this activity, I chose to focus on evaporation due to the fact that students often have a variety of misconceptions related to “phase changes of water” (p. 4), as is identified by Laura Henriques (2000) in “Children’s misconceptions about weather: A review of the literature.” Henriques identifies that rather than understanding “water left in an open container evaporates changing from liquid to gas,” children may believe the water “is absorbed by the container” or simply “disappears (Bar, 1989; Osborne & Cosgrove, 1983);” that it “changes into air or disappears and turns into air ((Bar, 1989; Brody, 1993; Lee, et al., 1993; Osborne & Cosgrove, 1983);” or that “the water dries up – it is not steam, it just dries up and goes into the air (Bar, 1989)” (p. 5). Henriques points out that “all the misconceptions here (except water being absorbed by the container) are basically true since water vapor is a legitimate component of air,” however, students generally “were not viewing the evaporated water as a component of air because air to them is nothingness” (p. 5).

G – Generate:
To access prior knowledge, check for misconceptions, and generate ideas about the topic, evaporation, I would begin with a few different activities to activate thinking and knowledge from different angles.

1) First, students would complete a “What-So-What?” activity. Students would be given a handout with a t-chart on it. The left column of the chart says “What?” and the right column says “So What?” Students would be shown two pictures and would be expected to respond on “What” they see and why each thing they see might be of importance (“So What?”). The pictures will be projected through a projector/proxima to a screen for them. The first picture would be of a bowl/container filled with water, perhaps sitting near a window or outside on a sunny day. The students would be given a set amount of time (I usually allow only one minute) to list as many things as possible that they see in the picture. They are then given additional time (I usually give about two minutes) to respond to why each thing they saw might be important in the “So What?” column. Next, students would be presented with a picture of the same container, except this time it would be empty (time and weather could change, but container and its location would remain the same). They would repeat the “What-So-What?” process. I would then do a “Whip Around” to have each student share one idea they came up with from the pictures – students are allowed to expand on an idea already shared by a peer, but must make it “their own.”

2) Originally, I had thought that I would have students generate ideas they had about the term “evaporation” by doing an idea web on paper. However, having read Khan’s (2012), “A Hidden GEM: A pedagogical approach to using technology to teach global warming” I decided I would borrow an idea from Khan’s generate strategies and use the Cmap program discussed in the article. Cmap software was developed through research by the Florida Institute for Human & Machine Cognition (IHMC) and “empowers users to construct, navigate, share and criticize knowledge models represented as concept maps” (IHMC, 2014). It is marketed as a software that can be used by all age groups, as individuals, as well as within schools and institutions (http://cmap.ihmc.us/). I had never used Cmap before, but found it very easy to download and to use at basic level. I feel that my grades 4/5 students would be comfortable using this application.

Using Cmap, I would ask students to create an initial map of ideas they can generate about their beliefs related to evaporation. This would likely include ideas they generated through the “What-So-What” activity, from the “Whip Around” activity, as well as from their own prior knowledge. I would allow students to work in partners to encourage discussion about evaporation and ideas generated. Students would create a basic Cmap at this point.
For example: 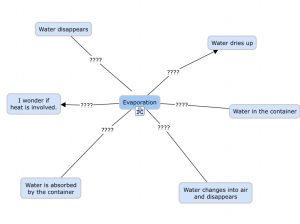 At this point, students would be asked (with their partner) to create a hypothesis based on the question: “What happens to water when it is left in an open container?”

(N.B. “What-So-What?” is a strategy I use quite often with my students, especially in Science and Social Studies lessons. I do not have an exact reference for this strategy, but it was shared by Faye Brownlie during a presentation she gave when visiting the district where I work a couple of years ago. The following is a link to her website: http://fayebrownlie.ca/)

E – Evaluate:
When I began searching for interactive simulations online, I found an interactive evaporation simulation that seemed to fit well with both the grade level I am aiming at (primarily grade 4) and the curriculum content that students will be expected to know “Solids, liquids and gases as matter” (B.C. Ministry of Education, 2016). Working in pairs to allow for discussion, students would use the online evaporation simulation to evaluate the ideas they generated in their Cmap. Students will be able to experiment with the following variables: how humid their environment will be (full sun, sun with clouds, clouds with rain), air temperature (between 10 and 40 degrees Celsius), and container shape (flatter and wider versus taller and thinner).
As students progress through the simulation, they will record/graph their findings taking into account the changes in variables. 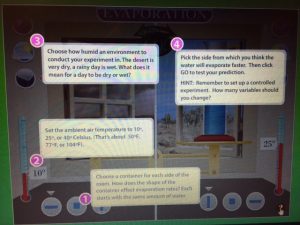 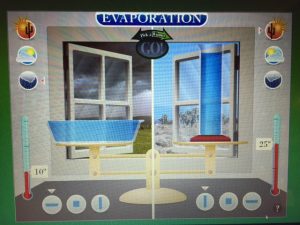 M – Modify:
Once they have completed the interactive evaporation simulation and recorded their findings, students will return to their original Cmap webs to modify their original webs. New ideas/findings/knowledge can be added to the existing Cmap, and new concepts can be added. In addition to this, new connections can be made, connecting existing ideas together, and causal relationships can be identified, all within the Cmap.
If I am looking for a more in-depth assessment or for further evidence of learning, I could ask students to explain orally (conference-style) what they observed happening during the simulation and to explain the concepts and connections shown on their Cmap. I could also ask students to write a paragraph to explain what they have learned and/or to draw a picture showing their understanding. Once modifications to their Cmap are complete, students would be asked to modify their original hypothesis, based on the data they have collected (based again on the question: “What happens to water when it is left in an open container?”).

Henriques, L. (2000, April). Children’s misconceptions about weather: A review of the literature. Paper presented at the annual meeting of the National Association of Research in Science Teaching, New Orleans, LA. Retrieved 7 January, 2017, from: http://web.csulb.edu/~lhenriqu/NARST2000.htm