GEM is an acronym for a pedagogical approach to teaching science that involves students taking an active part in constructing their own understanding of relationships and concepts, as well as learning how the scientific inquiry process works (Khan, 2007).

G in GEM stands for students Generating ideas about relationships,
E represents students Evaluating the relationships they have constructed,
M is the stage where students Modify those relationships to account for any discrepancies discovered during the modification stage, or to rectify any misconceptions held.
T-GEM is an adaption of the strategy to incorporate the integration of Technology into its implementation in the form of simulations or interactive models.

In her case study, Khan highlighted an important piece to the GEM cycle. Background content knowledge provided by the teacher at the beginning of the lesson is an important step to help students make some sense of the data they will be seeing in the experiments and simulations. This is essentially activating their schema or their prior knowledge in order for the students to build on their conceptual knowledge.  If the students don’t know what they are looking at, seeing relationships in the data becomes difficult (Khan, 2007).

Computer simulations that assist students’ visualization of scientific phenomena have been associated with gains in conceptual understanding among science students (Khan, 2010).  This corresponds directly with the TPCK pedagogy allowing teachers to integrate interactive science simulations for students enabling them to grasp somewhat “invisible” concepts. 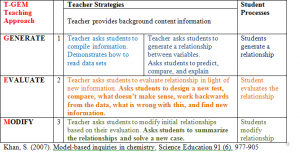 Over many years of teaching the science of Heat Energy, every year the students have misconceptions around the process of boiling liquids, and in particular the boiling of water. These misconceptions appear to have their basis in the way students observe their world around them (Johnson, 1998; Collins & Gentner, 1987). Andersson  (as cited in Driver, Guesne & Tiberghien, 1985, pg 82) found that 40 percent of twelve year old students expect water to continue to heat up even after it has reached its boiling point. The students also thought that the amount of time that heat was applied would affect the temperature would continue to affect the boiling point. This is true for my own experience with this age group doing a heating curve of water experiment. As the students got older, the percentage of students with this misconception decreased but there was still a large percentage who continued to misunderstand the nature of boiling. Driver, Guesne & Tiberghien (1985, p.82) state the “children’s logic had led them to think that the time of boiling and energy supply could influence the boiling point of a pure liquid.” They argue that “much of the confusion arises from the child’s view that heat and temperature are the same” (p.82). Since children have this preconceived notion they associate the increase in temperature with a corresponding increase in heat.

In order to combat this misconception in my science classroom I would use the T-GEM method to provide some computer simulations that complement the physical experiment of boiling water in the classroom.

Hopefully this will allow the students to understand the concepts of heat energy and changing states of matter.

Khan, S. (2012). A Hidden GEM: A pedagogical approach to using technology to teach global warming. The Science Teacher, 79(8). This article was written about T-GEM with middle-schoolers.