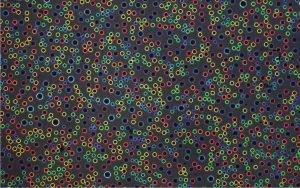 Pigments, dyes, and the rainbow are one of the many examples of the physical phenomena that create colour. A purple coloured t-shirt appears purple due to scattering and absorption of a certain wavelength of light more than others. The scattering and diffraction of light in a circular droplet forms a spectrum of colours in the atmosphere, which is known as a rainbow. However, an unrecognized mechanism of changing the structural shape of a droplet can also generate hues of colour.

In most cases, oil and water do not go so well together. However, transparent oil droplets have shown that a change in the structural shape of these concave droplets can appear as different colours depending on the viewer’s perspective. Below is a video demonstrating the many hues of colour that appear at different viewing directions.

A group of researchers at Penn State published a paper which explored the origin of these colours by projecting white light into a biphasic (have two phases, water and oil) concave droplet in a petri dish. The light enters the droplet which bounces on the oil-oil interface, and the reflected colours are projected in the shape of a translucent dome, which are the colours you see. They discovered that the curvature of the oil-oil interface in the droplet corresponds to the change in the iridescence. With correct techniques, they were able to manipulate the droplet shape, size, and curvature to produce an image of a blue and green penguin. This research can be of use to a variety of fields from sensors, displays, cosmetics and any colour-changing materials. 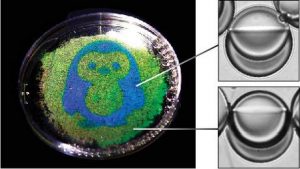 Observation of this phenomenon applies to droplets on transparent surfaces, and you can easily replicate this at home. A container with hot food and a sealed transparent lid will lock the steam forming droplets which will produce hues of colour.